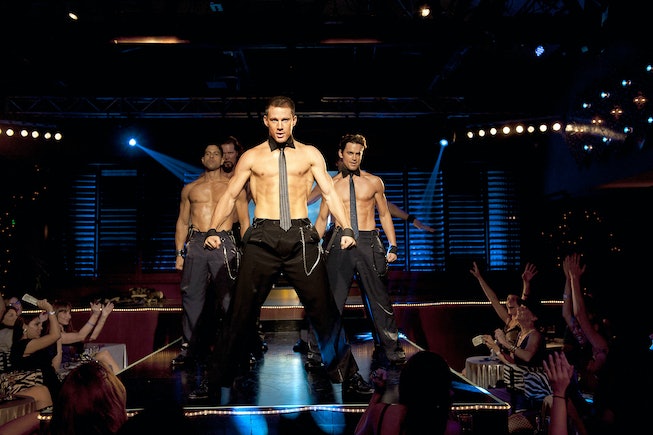 Channing Tatum and his abs are coming soon to a screen near you. Tatum is officially reprising his role as Mike Lane from the infamous Magic Mike franchise. The actor will work alongside director Steven Soderbergh and writer Reid Carolin — who created the first two films together — to bring the next movie, Magic Mike's Last Dance to life.

Deadline reports the film is being produced by Warner Bros. Toby Emmerich, the Chairman of Warner Bros. Pictures Group said, “We’re thrilled to be back in business with Channing, Steven, and their creative team to bring back Magic Mike’s wonderful combination of dance, drama, romance, and humor.”

Though the project is currently in its early stages, it’s already set to exclusively premiere on HBO Max down the line. Soderbergh reportedly has a first-look deal with the streamer, meaning he pitched the concept to them before taking it to other networks. It seems to be a wise purchase for HBO Max given the saga's massive fanbase.

The original film, which chronicles the life of a male stripper, premiered in 2012 and was a box-office hit. Since its debut Soderbergh and Carolin have created a sequel (Magic Mike XXL), and the film's premise has evolved into a live show in Vegas, London, Berlin, and Australia.

Plot details for Magic Mike’s Last Dance have yet to be revealed, but Soderbergh did share that he was inspired by the live-show. While speaking to Deadline he said, “as soon as I saw what Channing, Reid, and the Magic Mike choreographic team did with the live show, I said, “We have to make another movie.”

Tatum has also expressed his excitement for the upcoming-project. This afternoon he posted a photo of the films script to his social media accounts, and wrote, “Well world, looks like Mike Lane is tapping back in.” He recently spoke with Deadline as well and said, “the stripper-verse will never be the same.”

While we wait to learn what that means, HBO Max has another Magic Mike inspired project airing soon. Their new reality series, Finding Magic Mike, follows 10 men who have “lost their magic” and try to rebuild their confidence by learning sultry dance routines. In the end a winner will be given a cash prize and the opportunity to perform on the Magic Mike Live stage in Las Vegas. The competition-event premieres on December 16th.