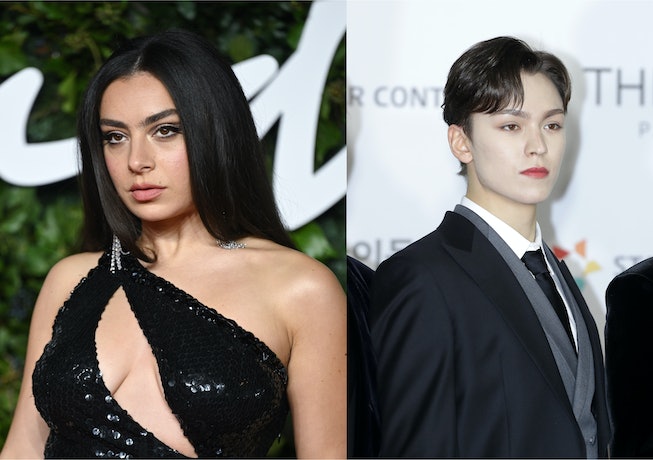 Seventeen’s Vernon and Charli XCX’s collaboration has arrived. Their remix of “Beg For You” with Rina Sawayama and a substantial production assist from A. G. Cook was released on Friday.

It’s hard to think the original could get any better, but somehow they managed to top it, with Cook giving the track a sinewy, hard club transformation, digitally distorting and elongating their vocal sections at moments in a way we can only describe as Matrix-like (think Keanu Reeves dodging a bullet?). Vernon’s contribution, which lands as the song’s second verse, is also a grand slam, his voice first coming in with heavy distortion before his silvery falsetto breaks through the digital veil.

Hear the track, which we’re daring to say may be better than the original, below.

A new pop star collaboration made in stan heaven is on the horizon. Charli XCX and K-pop boy band Seventeen member Vernon may be colliding on a new track coming out soon.

While nothing is set in stone yet, the gears of the project first started turning on — where else? — Twitter, where Charli XCX posed a question to her followers on Sunday asking who should be on the remix of her excellent new song “Beg For You” with Rina Sawayama. Amid the influx of names submitted, Vernon’s name was brought up the most as he had recently admitted in a W Magazine interview that he sings her songs in the shower.

Following up on that thread on Tuesday, Charli XCX and Vernon seemingly hashed out plans to record together on Twitter, as she asked the Seventeen Twitter account directly: “hi @pledis_17 wanna collab?” To which he immediately responded: “YES still can't believe this is real wow.” A real life stan music fairytale happening right before our eyes!

Of course, this is all very much tentative, and there’s no guarantee that what they record will even make it out given Charli XCX’s infamous backlog of unreleased collaborations with artists like Yung Lean, Bladee, and more. Still, it’s promising that their courting is happening on such a public platform like Twitter, in the sense that the fans will surely try their hardest to hold their artists accountable.

If the collaboration does come to fruition, it wouldn’t be the first time Charli XCX has collaborated with a K-pop artist. She teamed up with rapper Jay Park for her Pop 2 track “Unlock It” back in 2017. Park was famously the leader of popular K-pop boy group 2PM for several years though left the group in 2009 after old comments he’d written about Korea in 2005 were publicized by Korean media.

The hypothetical collaboration, however, would mark the first collaboration with a U.K. star for Seventeen. The 13-member band, which debuted back in 2015 and quickly became a massive force in the country’s entertainment scene, is heavily involved in every aspect of their music including songwriting, choreographing, and more, which seems to be another pro for the impending collaboration. In the meantime, all we can do is cross our fingers and wait.