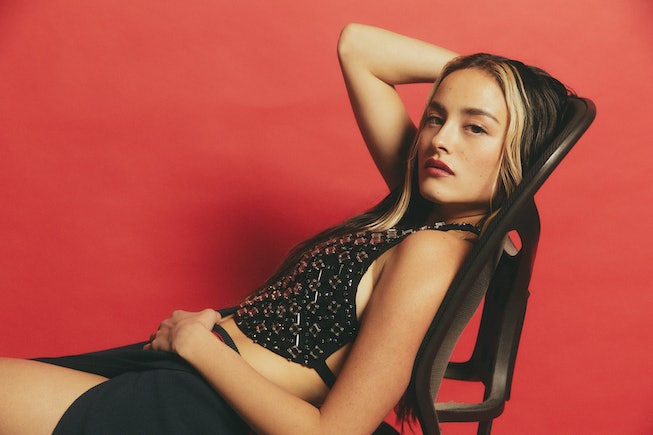 “They know so much about the world and culture and identity politics, and all so intensely,” she says over Zoom recently. “They absorb things so fast. Every little subculture of youth is so idiosyncratic.” Wonders would know: As one of the stars of HBO’s Generation, which premieres on Thursday, the 24-year-old is stepping back into high school once again. “I'm rewriting my history,” she says. “I wasn’t this confident character in high school; I wanted to blend in and have as little attention on me as possible. It feels good to cosplay as that now.”

Generation, which was created by actual teen Zelda Barnz and executive produced by Lena Dunham, centers around a group of students in the midst of that existential self-exploration that comes with the plights of high school. Wonders plays Riley, a self-assured aspiring photographer; in the show’s character description, she was written as “mature beyond her years.” The show is made up of largely new actors, with the expectation of Justice Smith; Wonders was cast in late September 2019, just before the pilot was set to film. “I got the script at, like, 11 p.m. on one night when I was out with friends in New York and had to submit a tape by the next morning,” she recalls. “I drunkenly went to sleep, woke up, and recorded the tape.” Soon enough, she was flying to Los Angeles to film the pilot. Then COVID hit.

“It was brutal,” Wonders says of that waiting period. Here she was, on the precipice of her first major role (previously, she’s made small appearances in Betty and The King of Staten Island) and suddenly she was stuck at home in her childhood bedroom in Detroit. The irony was not lost on her. “I was now living in my childhood bedroom with this vague idea that like my life might change.” During that time, she channeled her energy into writing — she currently has a TV script that she’s been focusing on — as well as directing her aunt’s Spring 2021 fashion film. Eventually, the show got the green light to move forward with filming.

Generation will roll out the first half of the season beginning March 11 and the second half will drop later this year. The cast is currently in the process of finishing their final three episodes, with Wonders in the midst of shooting an episode from Riley’s point of view. “She's going through it in a really intense kind of dissociative way,” Wonders explains. As such, the actress found it taking a toll off-set, as well. “Putting yourself in that mentality every day is an intense mutilation that you have to put your brain through.” To help compartmentalize her character’s mindset from her own, she’s been working with the show’s on-set intimacy coach. “She teaches closure techniques,” Wonders says. “You know the psychology of when you smile, you trick yourself into feeling happy? Well, when you trick your brain to dissociate, you start to dissociate. She taught me how to wash off the day.”

Just days from the premiere, Wonders says that the super-close cast is already starting to feel “nostalgic” about filming. There’s also a general sense of nerves and anticipation that comes before a show’s debut — all the more heightened by the fact that it’s already getting comparisons to HBO’s other uber-popular high school drama, Euphoria. Wonders, for one, takes this as a compliment. “I am so flattered that this is getting compared to the greatest show on TV,” she says. “That part's really exciting.”