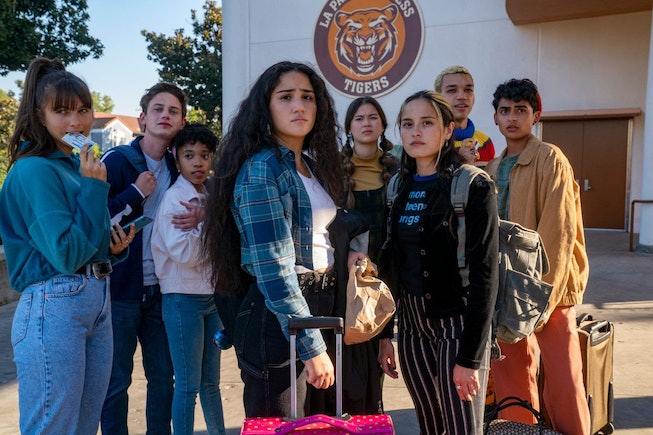 HBO Max is investing in more teen fare. The streaming platform's latest TV show to fill the Euphoria-shaped void in our hearts between seasons is new Gen Z drama, Generation (Genera+ion for the dedicated). The Lena Dunham-produced series follows the lives of modern high schoolers as they explore their sexuality and friendships while their parents struggle to understand them.

In the first trailer for the series, it seems like every character is either having a secret romance or longing for one, while one of the adults shakes her finger at the new generation's distaste for the gender binary. If the storylines sound typical of teen shows, the casting is at least more diverse than shows of the past. The ensemble cast stars Nathanya Alexander, Chloe East, Nava Mau, Lukita Maxwell, Haley Sanchez, Uly Schlesinger, Nathan Stewart-Jarrett, Marth Plimpton, Chase Sui Wonders, and Justice Smith. The series was created by 19-year-old Zelda Barnz and her dad, filmmaker Daniel Barnz.

The first three episodes of Genera+ion will premiere on March 11 on HBO Max.

NEXT UP
Culture
Phoebe Dynevor Will Not Return for Bridgerton Season 3
Culture
6 Shows To Binge Once You've Finished 'The White Lotus'
A Night Out
A Night Out With Rachel Bilson
Culture
Succession Season 4 Trailer Explodes With Family Drama
Style + Culture, delivered straight to your inbox.