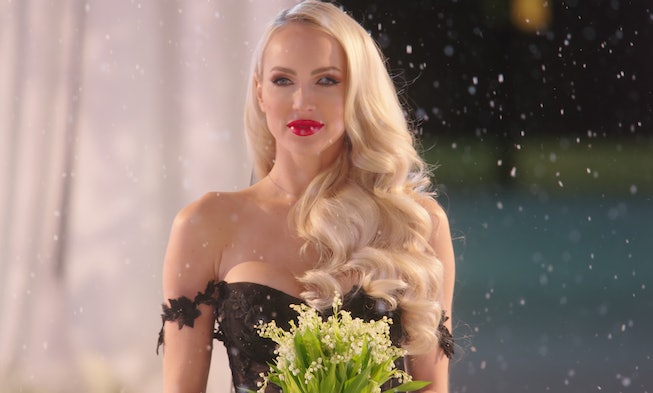 Like many people, I spent the majority of this past weekend making my way through the third season of Selling Sunset, Netflix’s latest reality TV hit, a pulpy blend of Bravo’s Million Dollar Listing and Vanderpump Rules from the brilliantly twisted minds behind The Hills. While there are plenty of elements to love about the half-hour confection — the beautiful real estate, the deliciously catty drama, the constant struggle to figure out which Oppenheim twin is Jason and which is Brett — I’d be lying if I said there wasn’t one specific thing I looked forward to seeing in any given episode. No, it wasn’t the adorable dogs that frequently run through The Oppenheim Group’s West Hollywood office, nor was it the painfully attractive face (and abs) of Mary Fitzgerald’s recent French groom, Romain (whose name I still refuse to condone). It wasn’t even because of the so-juicy-I-can’t-look-away train wreck of watching Chrishell Stause find out about her divorce from This Is Us’s Justin Hartley in real time. It was one thing and one thing only: Christine Quinn’s outfits.

The rightful heir to the "America’s Favorite Villain" throne, Quinn, a perfectly-coiffed ball of lanky, modelesque looks, would have been a striking presence regardless. But with her made-for-TV wardrobe of deliberately attention-grabbing pieces, she’s become impossible to ignore. And for good reason. There is a quasi-drag aesthetic to Quinn's outfits — a certain dedication to pomp and circumstance, a clear reliance on excess, an unapologetic appeal to camp. It's not hard to imagine Quinn describing her own fashion sense in the same way Lady Gaga describes Ryan Murphy: talented, brilliant, incredible, amazing, show-stopping, spectacular, never the same, totally unique, completely not ever been done before, unafraid to reference or not reference. She is, to continue the metaphor, a reverse Warholian experience.

Whether it’s her tendency to wear evening looks in the daytime or her affinity for butt-length ponytails (which she often braids with an assortment of jewels and crystals), the self-professed "Goth Barbie" is a certified fashion icon. Which is why I had to rank my favorite Christine looks from season three. So, here we go.

Given my less-than-enthusiastic opinions about Karamo Brown, it should come as no surprise that my least-favorite favorite look of Quinn's this season was one she wore to show a house to the Queer Eye host. A simple white suit with dramatically flared pants — accessorized with a dramatic choker with cascading ombré fringe — this was one of Quinn's less immediately striking outfits. But that's not necessarily a bad thing. After all, Quinn doesn't do "simple" unless it comes with a twist, so naturally, she topped it all off by wearing a single fingerless black leather glove, proving, once and for all, that no one loves an accessory more than she does.

9. A Modern Birthday Suit (No, Not That Kind)

At first glance, I was quite surprised that Quinn's birthday dinner outfit was as straightforward as it was. But then, I kept watching the season and realized that the style icon had a lot on her plate. Besides, a "straightforward" birthday outfit for her is still extra for most people, as exhibited by her decision to wear a plunging red brocade silk suit with a nude top underneath. Add in the glistening diamond necklace she wore tightly around her neck and the full ensemble gives a completely new meaning to the term "birthday suit." (And you know her now-husband got the best of both suits when she finally got home.)

More so than anyone else on the show, Quinn leans into the idea that fashion can (and should) be, above all, fun. Sometimes, this means taking risks, but at other times, it just means wearing things that feel carefree. So when she invited her best friends Davina and Maya over to her house for a gossip session tea time — the tea, of course, was barely heated up in the microwave because she doesn't know how to operate her stove — she kept things fun and easy in a pair of Louis Vuitton-branded tights and a black T-shirt with fun fur pompom sleeves. She kept the jewelry to a minimum, opting only for a gold-and-black cigarette case necklace. But she made sure to show off her bubbly personality by putting her hair up into a pair of Baby Spice-inspired pigtails that bounced around whenever she feigned shock about co-star Chrishell Stause's recent divorce announcement.

If you're going to run late to a work event, you'd better make sure you do so in style. This is, of course, no problem for Quinn, who showed up to a celebratory work dinner (yes, I'm counting this as a work event) in an outfit that immediately shifted the conversation from "You're late" to "Oh my god, you look so cute!" Arriving with a very acceptable excuse for her tardiness (her dog ran away!), Christine sashayed into the swank restaurant looking atypically dressed-down in a periwinkle Balenciaga logo sweater with matching beanie that she paired with a bright pink fluffy bag and simple blue jeans. A casual look that was clearly still thought-out, it inadvertently did a lot of the excusing for her — it was a look that screamed I've been running around my neighborhood for hours, desperately knocking on doors to find my dog while still feeling very modern and stylish. Only Christine!

Typically, Americans view Thanksgiving as a time to give thanks for all they've been blessed with, a deferential period dedicated to self-reflection and temporary humility. Not so for Christine Quinn. When it came time to stop by The Oppenheim Group offices for Brett and Jason's annual after-hours Friendsgiving feast, Quinn opted for...everything gold she could possibly find in her closet: a form-fitting ruched silk dress, a spiky gold dog collar choker, huge gold bangles, and, of course, gold accents in her hair (this time, in a rare updo). The only thing that wasn't gold was the fur coat she slung over one shoulder — but that came off almost immediately. Somehow, she didn't look out of place amongst the much more casually dressed attendees. Perhaps because Quinn is known for stealing attention, her comparably elegant ensemble just seemed normal. That's power.

What would you wear to meet with a billionaire in order to get a better understanding of why he thinks his no-view-having Beverly Hills McMansion is worth 75 million dollars? If your name is Christine Quinn, you would put on a Valentine's Day-inspired ensemble comprised of a hot pink one-sleeved knee-length dress with a matching hot pink tuxedo jacket, accented by a vampy red shawl collar. What defines "professional" attire has always been quite elusive in the world of luxury real estate, but it's eluded Quinn even more, who doesn't appear to dress for situations as much as she dresses for, well, whatever she feels like. In fact, the best part of this outfit is also the most typically non-office-acceptable: a butt-length blonde ponytail which she playfully accents with butterfly hair-ties. As the strikingly colorful winged insects cascade down her back, she looks like she's just emerged from the wilderness — a forest nymph ready to take on the big city.

4. Show A Little Bit of Pride

When it's time to meet up with your former best friend to hash out some of the drama that has led to the dissolution of your relationship, what better way to communicate I'm open to change than with a bright rainbow fur chubby? Even as a proud member of the LGBTQ+ community, I've never really been a big fan of rainbows, but on Quinn, the usually garish pattern looks unexpectedly sleek. The statement coat also forms a nice contrast with her big black hat and gold Louis Vuitton logo hoops, turning what could have easily been an incognito Carmen Sandiego costume into a playful blending-in-while-also-standing-out look that does a lion's share of the work in making sure she comes off as amenable to rekindling her strained relationship with Mary.

Quinn loves to make a statement, so when she arrived to the Oppenheim Group office in a blindingly bright ensemble most people would save for a 2:00 a.m. rave, her coworkers didn't bat an eye. Her lime green fitted sweater paired with a black-and-green asymmetrical tennis skirt would have already turned this outfit into a certified winner, but with the addition of a matching Balenciaga Ville bag and cat-eye sunglasses, the statement-maker steps it up to bona fide legend status. More importantly, Quinn is never afraid to poke fun at how cartoonish her ensembles can come across: When Heather notes that she looks "like The Joker," she playfully responds, "Thank you. I feel like it all the time!" And later, when Maya, via FaceTime, compliments her on "the vibrant colors," she keeps up the comic book supervillain homage by jesting, "I was feeling very Harley Quinn!"

For a bride-to-be who planned to wear black to her wedding, I found the choice of a white outfit for some on-camera wedding planning to be pleasantly tongue-in-cheek. Sitting at her stately breakfast room table alongside her retired software magnate fiancée, Quinn looked great in a cream-and-black tweed skirt suit that she paired with a belly-grazing white-and-black crop top. The best aspect of Quinn's style has always been the ease in which she re-contextualizes her garments, wearing things that shouldn't make sense in certain situations in ways that somehow still do — and this is no different. With her whimsical styling decisions (the aforementioned cropped tank top, the way she throws the jacket over her shoulders like a cape rather than wearing it as intended), Quinn successfully changes a tweed suit (a Chanel staple usually associated with prim propriety) into something noticeably laid-back and easygoing.

1. A Wedding Gown Fit For An (Evil) Queen

Could you imagine anything else taking the top spot? Just as season two concluded with Mary's wedding to the inexplicably handsome former pastry chef Romain, season three also concluded with a wedding — Christine's. But where Mary's wedding felt intimate and low-key — yes, even as it was held at one of her current listings, leading to a built-for-the-headlines moment in which she actually sells the home of her wedding venue to a potential buyer on the day of her wedding — Quinn's, a "Gothic Winter Wonderland," was deliberately over-the-top, a no-expense-spared affair that featured an ice station where guests were given fur coats to wrap themselves in, falling snow as she walked down the aisle, and an indoor pond filled with literal swans. But nothing could compare to the wedding dress itself, a Galia Lahav couture gown. In an appropriate role-reversal, Quinn insisted on getting married in black, while instructing guests to dress in white. The final product (the first of two gowns she'd wear that night), a lacy black princess-cut ballgown rendered in sparkly fabric, is a stunning garment — and that means a lot coming from me, as someone who generally dislikes wedding gowns. As she glided down the aisle, covered in fake snow that dramatically fell from the ceiling, she radiated, fully stepping into her rule as the misunderstood villain — the Maleficent of her time.