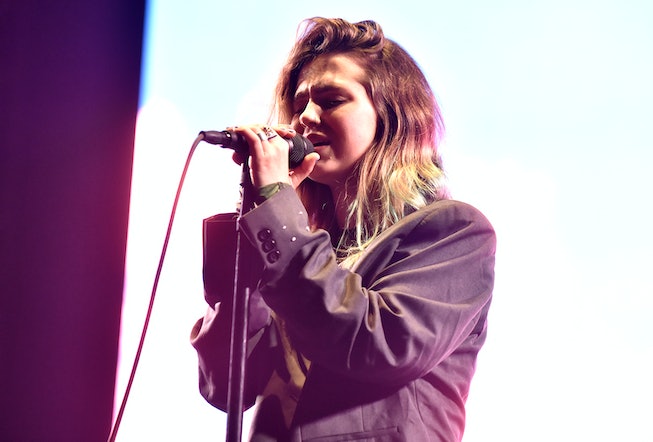 For some parts of the world, it will soon be one whole year since we all collectively entered this strange, oftentimes challenging, and frankly, traumatic phase of existence. Because we're humans, we've quickly acclimated to our new lives: wearing masks, getting used to Zoom as replacement for real socialization, and finding new ways to replicate old joys under these new limitations. But it wouldn't be the whole truth to not acknowledge the ways we have also struggled — and continue to struggle — to adapt and survive.

Clairo released a new song on Tuesday that places that part of the pandemic — the part we sometimes like to push aside — in sharp focus, by sharing in intimate detail her own private struggles with her mental health in the past year. "Just For Today," which you can listen to exclusively through her Instagram, is a vital listen for the current moment. For the young songwriter, it's also a plain look at how her own songwriting abilities have grown, as she sings heartbreakingly in the second verse: "Mommy, I’m afraid I’ve been talking to the hotline again/ It’s stirring, but the ripples always seek out the ones who carry me."

"[N]ot sure about you, but my mental health has taken a major dip since quarantine started — at times I feel like i've [sic] never felt worse," she writes of the song on Instagram. "[N]ew medication, hotlines, and one scheduled appointment with a psychiatrist later and i'm feeling more like myself again. I wrote this last night and i feel there's no real reason I should hold onto it."

Recorded in what sounds to be her backyard, the song features her softly singing and strumming along with her guitar, with the chirping birds and her barking dog filtering in through the background. It's an oddly peaceful listen, not only because of its comforting, ASMR-nature, but also because it feels like one step closer to actually healing. Hear it below.