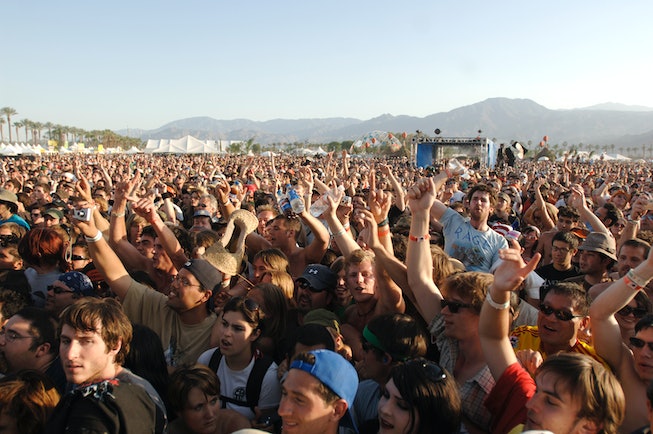 If you — like Vanessa Hudgens, we imagine — have been patiently waiting for Coachella to return, wait no more: The gargantuan California festival has officially confirmed the dates for their next festival, taking place in April 2022.

After being rescheduled four times since its original event in April 2020, Coachella is finally making its long-awaited return on April 15-17 and 22-24, 2022 at its usual location in the deserts of Indio, California.

While many other music festivals like Bonnaroo, Lollapalooza, and Governors Ball took the plunge and committed to putting on a 2021 event in the fall, Goldenvoice, the organizers behind Coachella and its sister festival Stagecoach, made the decision to hold off until 2022.

“There’s a big difference between having two weekends of Coachella in California and throwing a country festival in Florida,” an insider source told Variety earlier this year.

Nonetheless, now that the two weekends are a go, here’s everything that you need to know about attending the desert extravaganza in 2022.

After months of rumors and last-minute changes to the lineup, Coachella has officially announced its 2022 headliners and full lineup.

Billie Eilish, Kanye West, Harry Styles, and previously-announced headliner Swedish House Mafia will make up the four headliners of Coachella’s long-awaited return festival. Styles, Eilish, and West (printed on the poster as Ye) will headline Friday, Saturday, and Sunday of both weekends, respectively. It’s unclear what day(s) Swedish House Mafia will be playing at the festival but they will be “returning to the desert” and presumably perform in a major slot.

The collective 88rising will also have a major presence at the festival as they’ll be debuting something called Head In The Clouds Forever at the festival.

For a while, early media reports stated that Rage Against The Machine, who was expected to headline the cancelled 2020 festival, and Swedish House Mafia were set to headline the upcoming festival — but that clearly changed in recent months. TMZ recently reported that Rage Against The Machine was out of the running. (Travis Scott was also previously announced as a headliner for the 2022 festival however, following the Astroworld tragedy, has since been removed from the lineup.)

See the full lineup above or on Coachella’s website.

Coachella will no longer require proof of vaccination from ticket holders in a surprise reversal of its COVID-19 policy for the 2022 festival, organizers announced on Wednesday Oct. 13. A negative Covid test taken within 72 hours before the event will instead be the only requirement, with the option to provide proof of vaccination.

Announcing the change via the festival’s Instagram story, organizers wrote: “After seeing first-hand the low transmission data and successful implementation of safety protocols at our other festivals this past month, we feel confident we can update our health policy to allow for: Negative Covid-19 test taken within 72 hours of the event OR Proof of full vaccination.”

Previously, organizers announced in August 2021 that they would require all concert attendees and staff to be fully vaccinated against COVID-19, as music promoter AEG mandated the policy for all of their festivals, venues, and concerts.

Like past years, YouTube has returned as Coachella’s main streaming partner and will live broadcast both weekends of performances via mobile, web, smart TV and other streaming devices.

In 2019, performances were divided across three viewing channels on the official Coachella YouTube page. There was also a scheduling tool that automatically switched streams when a pre-selected artist hit the stage. That was also the first year YouTube provided livestreams for both weekends rather than just opening weekend, which it has done since 2011.

How To Buy Coachella 2022 Tickets

Weekend one tickets are currently sold out though you can still join the waitlist.

Editors note: This article was updated on January 13, 2021 with new information regarding the lineup and tickets.