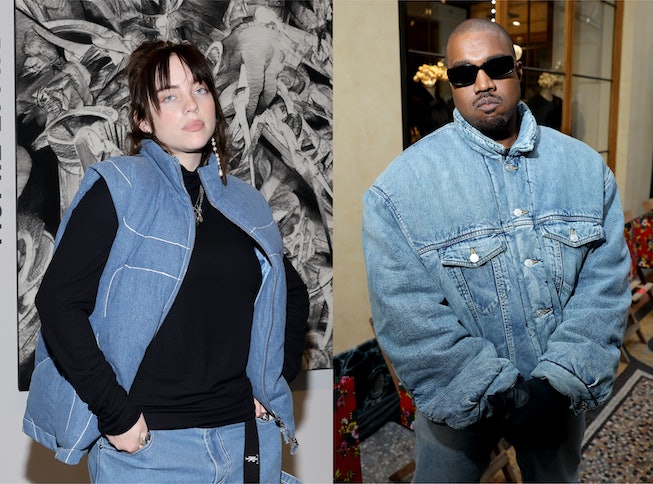 One of the strangest feuds in recent memory has dominated social media over the past 24 hours. On Thursday, Kanye West made an out-of-the-blue and bizarre demand for Billie Eilish to apologize to Travis Scott for a perceived diss against the rapper, or West would boycott his upcoming Coachella headlining performance.

Eilish has since responded — spoiler: she didn’t apologize — but how did the two get here in the first place, and why is Travis Scott involved?

Below, we broke-down the “feud,” starting from Eilish’s perceived “diss” against Scott to Kanye’s demands, the public’s reaction, and what the Astroworld victims have to say about all of it.

It all began when Billie Eilish paused a recent concert to help out a fan in the audience.

At her Feb. 5 show at Atlanta’s State Farm Arena, Eilish noticed a fan visibly in distress in the pit and halted her set to help her. It turned out that the person in question was having trouble breathing and was in need of an inhaler — which Eilish happened to have backstage. Instructing someone in her crew to go grab it, according to fan-captured footage of the incident, she then tried to settle down the crowd saying, “Don’t crowd. Relax, relax, it’s okay.”

Then, she added: “I wait for people to be okay before I keep going,” which many people and media outlets perceived to be an indirect dig at Travis Scott and the Astroworld tragedy. It’s worth pointing out that Eilish has a long history of pausing her shows to check in on her fans, with numerous videos of her doing just that found online.

At the moment, Scott is deeply embroiled in billions of dollars worth of lawsuits filed by the victims and victims’ families of the Astroworld tragedy, filed against him and other participating parties including Live Nation and Drake. There’s still widespread contention regarding whether Scott knew about the deaths while performing on stage and chose to keep the show going, or if he had no idea. In an interview with Charlamagne Tha God, Scott maintained that he didn’t hear the crowd telling him to stop the concert, nor did he know the full extent of what happened until after the festival was over.

“It wasn’t really until minutes til the press conference I figured out exactly what happened,” Scott told Charlamagne. “Even after the show, you’re just kinda hearing things, which I didn’t know the exact details until minutes before the press conference. And even at that moment, you’re kinda just like, ‘Wait, what?’ You just went through something and it’s like, ‘What?’”

Nearly five days after Eilish’s Atlanta concert, West called out the young artist on Instagram for her perceived diss against Scott, bizarrely demanding that she apologize to Scott or West wouldn’t perform at Coachella. (Both West and Eilish are slated to headline Coachella’s 2022 music festival. Notably, Scott was also originally slated to headline the festival though was dropped from the bill following the Astroworld tragedy.)

West paired the caption alongside a screenshot of a news article with the headline, “Billie Eilish Dissed Travis Scott At Her Concert After She Stopped The Show To Give Her Fan An Inhaler! ‘I Wait For The People To Be Okay Before I Keep Going’”

As fans quickly began to take sides, the oddest part of the whole “feud” wasn’t lost on people, either — that Eilish didn’t mention Scott at all, and that West, 44, was trying to start beef with Eilish, who is 20. Additionally, West’s request for Eilish to also apologize to the families of the Astroworld victims also seemed random, inappropriate, and out of line.

Notably, after West aired his demands, Rolling Stone reached out to the grandparents of the youngest victim from the Astroworld tragedy, that of 9-year-old Ezra Blount, who called West’s comments “idiotic” and “hurtful.”

“To hear Kanye’s words, that’s hurtful to us. What an idiotic thing to say,” Bernon Blount told Rolling Stone.

Tericia Blount, the grandmother, added: “I think it’s just crazy, and I hate to use that word, but I think it’s ridiculous. She’s making sure that she is caring for the patrons at her concert, and I just think that’s crazy of Kanye to even let that demand come out of his mouth.”

“Literally never said a thing about travis. was just helping a fan,” she wrote.

West hasn’t responded to her comment, nor has he addressed whether he’ll still play Coachella. Scott, on the other hand, has stayed silent throughout the entire thing.