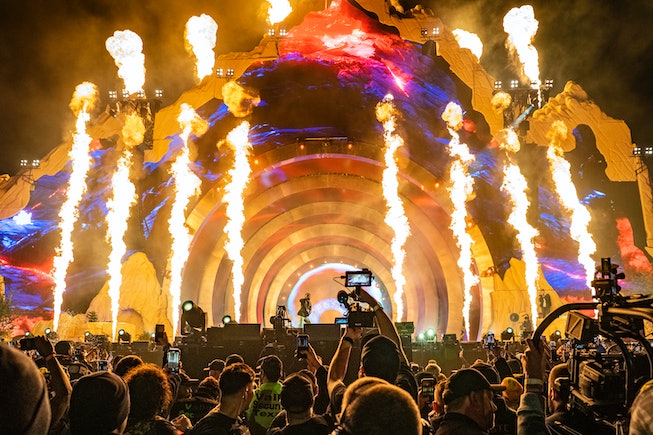 The death count for Astroworld has now risen to ten people, as two more concertgoers have died from injuries they received while at the music festival hosted by Travis Scott.

A 9-year-old boy identified as Ezra Blount by his family died on Sunday after being in a medically induced coma meant to help him overcome brain, liver and kidney trauma, CNN reports. The boy was trampled by the overpacked crowd at Astroworld when he fell from the shoulders of his father, who passed out as he was crushed by the mass of people at the show.

The ninth person to die from injuries sustained at Astroworld was 22-year-old Bharti Shahani, who died last Wednesday “from the horrific injuries she sustained at the Astroworld festival,” her family's attorney said.

Funeral services for some of the eight other victims who died at Astroworld are underway, with Scott pledging to cover the expenses.

Drake, Kim Kardashian and Kendall Jenner have all now addressed the deadly events at Travis Scott’s Astroworld Festival. Jenner was watching the concert from the VIP section with sister Kylie and 3-year-old Stormi, the daughter of Kylie and Scott, and posted a note to Instagram expressing her grief at the eight lives lost due to overcrowding at the event.

“I’m still at a loss for words over the news from Astroworld,” she wrote in a note posted to her Instagram Stories. “I’m truly broken for the families that have lost loved ones and my prayers go out to everyone involved.”

Kim Kardashian shared a similar note, writing in part, “Absolutely heartbroken for the lives who were lost and anyone who was hurt at Astroworld. Just like all of you, our family is in shock by the tragedy. We are keeping all of the victims, families and loved ones impacted in our prayers for healing - as well as Travis who we know cares so much about his fans and is truly devastated.”

Finally, Drake also broke his silence on the event. Drake joined Scott on stage to perform their hit “Sicko Mode,” as concertgoers begged the show to stop (and as some literally died). In a note posted to his Instagram grid, Drake wrote in part, “I’ve spent the past few days trying to wrap my my around this devastating tragedy. I hate resorting to this platform to express an emotion as delicate as grief but this is where I find myself. My heart is broken for the families and friends of those who lost their lives and for anyone who is suffering.”

On Monday, Scott pledged to cover the funeral costs of the eight people killed at his concert — ages 14 through 27. He also announced a partnership with BetterHelp, an app designed to bring low cost therapy to users.

On Friday, November 6th, Travis Scott’s Astroworld Festival at NRG Park in his hometown of Houston, Texas turned deadly, with eight reported deaths and many more injured in the overcrowded arena. Among the dead were a 14-year-old and a 16-year-old, in addition to other victims in their 20s.

Graphic videos from the concert show people passing out, being crushed together and trampled under the surging crowd, with many concertgoers crying out for help and begging concert staff to stop the show. The show reportedly went on for 40 minutes after initial reports of attendees being injured reached medics. Scott has been criticized for not stopping the performance early enough, and seeming to not notice what was happening.

“I am absolutely devastated by what took place last night,” Scott wrote on Twitter. “My prayers go out to the families and all those impacted by what happened at Astroworld Festival. Houston PD has my total support as they continue to look into the tragic loss of life. I am committed to working together with the Houston community to heal and support the families in need.”

On Saturday night, Scott shared multiple, black-and-white, front-facing camera stories to Instagram, rubbing his forehead as he tried to clarify that he did not know the severity of the situation while he was performing. "Any time I could make out, you know, anything that's going on, you know, I just stopped my show and, you know, helped them get the help they need," Scott says in the video.

Scott has now cancelled his headlining performance at this weekend’s Day N Vegas Festival, Variety reports, saying that he is “too distraught to play.” He also will provide full refunds for all attendees who bought tickets to Astroworld.

Kylie Jenner, who is currently pregnant and was in attendance at Astroworld with her and Scott’s 3-year-old daughter Stormi, also shared a statement to social media.

“Travis and I are broken and devastated,” Jenner wrote in a post shared to Instagram Stories on Saturday. “My thoughts and prayers are with all who lost their lives, were injured or affected in anyway by yesterday’s events. And also for Travis who I know cares deeply for his fans and the Houston community.”

Jenner then went on to address criticisms that Scott should have stopped the show sooner, and videos that seem to show him continuing to perform despite witnessing an unconscious person being carried out of the crowd. She herself was criticized for posting images to Instagram that showed an ambulance struggling to get through the crowd.

“I want to make it clear we weren’t aware of any fatalities until the news came out after the show and in no world would have continued filming or performing,” Jenner wrote. “I am sending my deepest condolences to all the families during this difficult time and will be praying for the healing of everyone who has been impacted.”

Investigations are currently taking place into why things happened the way they did. Houston Police Chief Troy Finner has reportedly defended letting the show continue, saying that an abrupt halt could have caused a riot. He also reportedly said the festival was not understaffed and the amount of officers on site should have been sufficient to handle the 50,000 person crowd.

The second night of the concert, which also featured performances by Lil Baby, SZA and an appearance by Drake, was cancelled. Several lawsuits against Scott and Live Nation have already been filed.