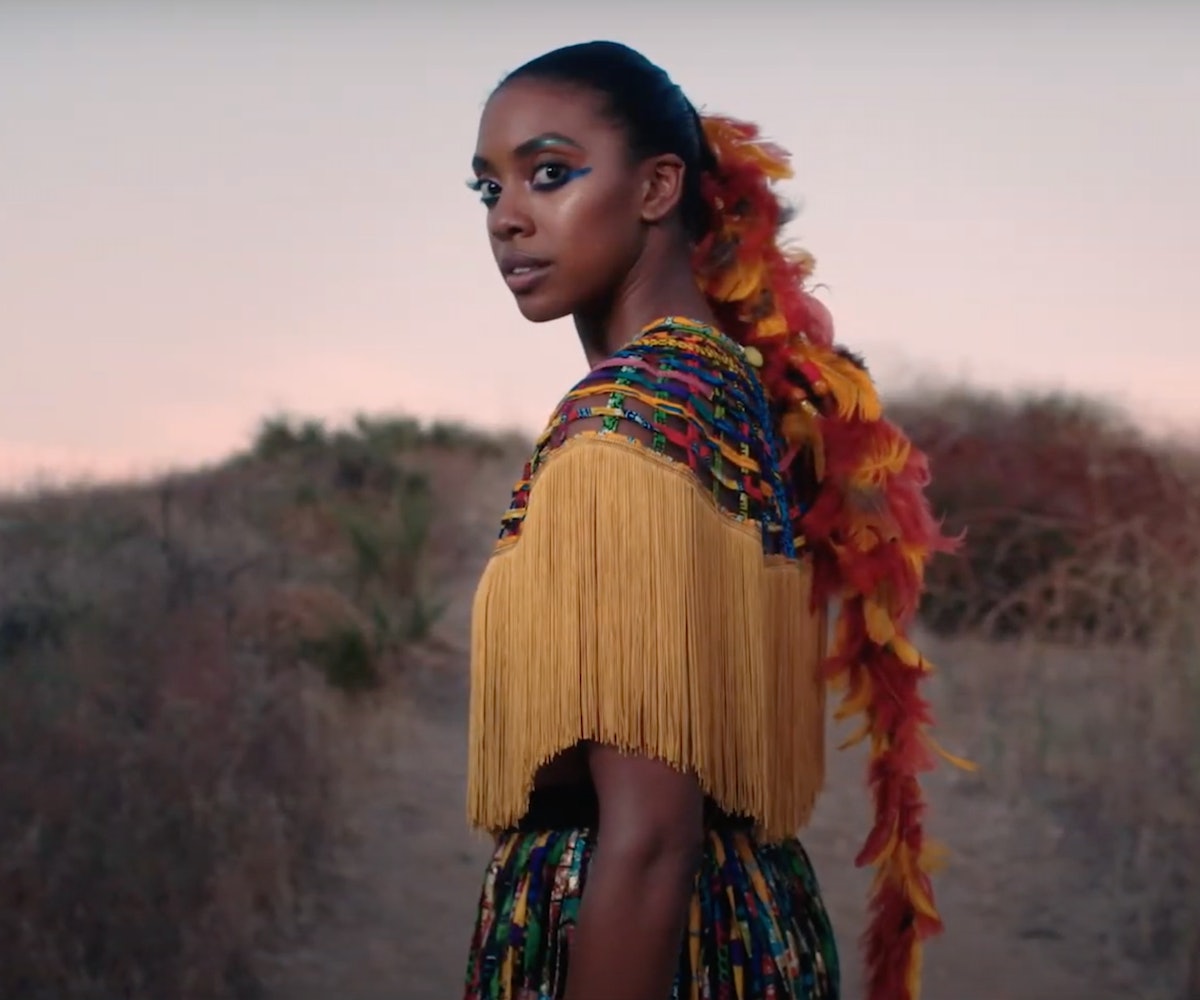 Condola Rashad may have made her name by performing in numerous Broadway plays like A Dolls House, Part 2, Stick Fly, and more, but before that she was the singer in an indie rock group called Condola & The Stoop Kids. Now, a several years later, she doesn't make rock anymore, but she's taken up the musician mantle again as, simply, Dola. Since the beginning of April, the actress and singer has been steadily releasing videos and songs from her new visual EP, SPACE DAUGHTER. On Wednesday, NYLON shares the spirited final installment of the five-piece series, "Too Fire," for which the streaming proceeds will indefinitely be directed to the Marsha P Johnson Institute.

Over spare and energetic beatboxing, Rashad resists being controlled or dictated by anyone other than herself: "I wasn't born to be bound so small/ Maybe there's more to me, I don't wanna know," she chants before the blazing chorus takes over: "Too fire, too fire, too fire." It's the triumphant finale to close out the theatrical pop project that, at moments, feels in line with Grace Jones's catalog, or Beyoncé's Lemonade. The self-directed video finds Rashad reconnecting with a version of her younger self as they joyfully play inside a constructed fort. Along with the previous four installments, the video was shot at Rashad's alma mater, California Institute of the Arts, and the Center for New Performance, over the course of five days.

"It is in this chapter where the main manifestation of SPACE DAUGHTER reconnects with a younger version of herself, and it is realized that all of the worlds that have been introduced to the audience originated in the colorful, creative mind of her young self," Rashad writes to NYLON via email. "'Too Fire' is about the realization, acceptance, and celebration of ones light and inner child. It's the beginning of the understanding that you, yourself are the one you've been searching for."

Read on to learn how Rashad has been passing time in quarantine, why she's supporting the Marsha P Johnson Institute, and whether she sees structural change happening for Broadway.

I'm currently in Seattle, social distance-visiting family and loved ones. But I started the quarantine back in March in my apartment in Brooklyn and was holed up there for a little over two months. It's been hard to describe to a lot of my friends what it was like to be in Brooklyn at the height of the New York spike. The sound of ambulances blaring every 8 minutes or so for weeks, is not likely something any of us will forget. But from the beginning, I have found myself feeling mostly deep gratitude. In these unprecedented times, it's the simple things in life like being able to breathe that I realize I had been taking for granted. This summer has been about reconnecting to my breath, reconnecting with nature, and taking the time to really look at where the need to always be "on" really comes from with the intention of releasing it.

Proceeds from the streaming of this single are going to the Marsha P Johnson Institute. Why was supporting this organization important to you?

We were always slated to start the release of this project at the end of March. And at the beginning of the quarantine, everyone's intention was to hold off, but then I realized that I had something that I had put a lot of light into and in this shadowy moment in history. I didn't want to wait until it was a "better time for me" to release it. If I had a few minutes of visuals and music that could be soothing or uplifting to anyone, I wanted to offer it. I realized I could direct the proceeds to organizations and collectives that were financially giving to the community at this time, and so that's just what I did. It brings me great joy that proceeds of the finale will be directed the Marsha P. Johnson Institute indefinitely. We cannot continue to ignore the amount of violence against trans women in this country. And as a cisgendered woman and ally I felt inclined to support the MPJ institute as they continue to fight for the rights of Black transgender people and as they continue to support, amplify and celebrate the voices of transgender people.

What prompted you to return to your music-making roots and release this EP?

Years ago, I was in an underground indie rock band called Condola & The Stoop Kids, it was one of the most exciting periods of my life. But after we created our album, it became apparent that I wasn't quite yet in the position to make sure these two aspects of my artistry — acting and music — could thrive simultaneously. So I made a pact with myself that I would focus on the development of my acting career for a few years. I've always been a musician first, and that will never change. Two years ago, I finally felt it was time to share my music again, and here we are!

As a Broadway star, and someone who signed the We See You, White American Theatre letter, do you have confidence that Broadway will change?

Absolutely I do, because we will be the ones to change it. While I'm so grateful and fortunate that the majority of my experiences as a New York theater actor are experiences that I look back on fondly, there are a number of experiences that I've had as a Black artist that I've yet to share. I never shared them because I was young, I didn't really know how to, and I didn't want to be remembered for the things that had happened. I wanted to be remembered for the actual work that I had done. We are overdue for an entire shift — the days of systemic oppression in this country are numbered. In order for change, we, the people, must continue to do the work — and that is exactly what is happening, and will continue to happen.