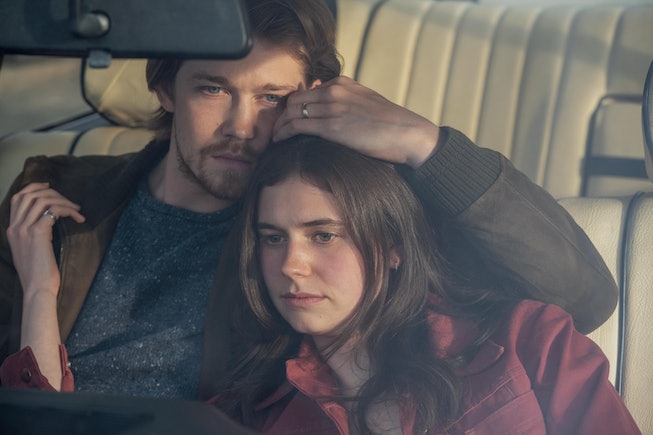 In Normal People, Hulu’s adaptation of the hit novel by Irish author Sally Rooney, two millennials find themselves intertwined in a passionate affair whose connection is mostly expressed — aside from sex — in longing glances and heavy silence. In Conversations With Friends, Hulu’s next Rooney adaptation, the characters find themselves in similar emotional standoffs. Despite the title, not much clear communication is happening here, which makes the material all the richer.

“[The story] is about as much what isn't said as what is, or people trying and failing to say something or work out what they feel,” Joe Alwyn tells NYLON. He and Alison Oliver star as Nick and Frances respectively, who fall in love after meeting through friends. Frances, a 21 year old college student, has never been in a serious relationship before, while the slightly older Nick is already in one with his wife, Melissa (Jemima Kirke). As the pair get to know each other, aided by Frances’ best friend Bobbi (Sasha Lane) and her own flirtation with Melissa, secrets abound, passions flare and each character must reevaluate their own desires and relationships.

For Alwyn and Oliver, much of the challenge and joy of the work came from getting to know characters with such complex inner lives. Read on for NYLON’s interview with the pair ahead of the series’ premiere:

Had either of you read the book — or any of Sally's books — prior to getting the script?

Alison: Yeah, we both had.

Joe: I've read them both and was a massive fan of her as a writer. And then consequently loved what Lenny [Abrahamson] and they all did with Normal People. So it was an exciting opportunity to be a part of a book that you're a fan of, made by a filmmaker who you’ve also been a fan of for a long time. It was lovely.

Alison: I read Normal People, I think in 2018, not too far after it had come out. And then Conversations With Friends was my first lockdown novel, which is funny. And I read that in a day or two. I live in Dublin usually and her name [Sally Rooney] is just everywhere. She's so obviously popular in the world, but she's such a fan base there. So it was a book that everyone I knew was reading.

Being so close to the material now, why do you think Rooney’s books are resonating so much right now?

Alison: You're following these characters’ lives or maybe a particular narrative, but actually, she's covering so much universal stuff about coming of age and love. And I think what's really great about Sally, is she really gives it the weight that it feels. She really lets heartbreak be horrendous. All of those things that on a global level or existential level might seem like not a very big thing, but when you're actually going through that stuff —when you're growing up and you feel really lost or you get heart broken or any of those things — she really just gives it that space and has such a unique way of describing those feelings and those thoughts that I think we all have in different shapes and forms.

So I think people just feel really seen by her work and really understood. And I certainly feel like because her characters are so flawed as well as wonderful, it just really grounds them, and makes them feel very human and closer to us so we can relate to that even more. I guess they make you feel a bit more forgiving of yourself or of others, which is always a great thing.

What were your initial entry points into your roles? How did you connect with your characters?

Joe: They're all incredibly complex, grounded people. And like Ali said, I think one of the reasons people like the book is because as brilliant as they are as characters, they're also flawed. And for me perhaps thinking about Nick, I liked that, at least initially, he was very much one thing on the surface, but had something else going on deep beneath. Even other people didn't quite know what that was at the beginning. I liked that there could be, or should be, lots of layers to him. And I thought it was interesting that on one level, for some of the characters like Bobbi (Sasha Lane), that's sort of just plain passiveness or being boring or quiet. But for Frances, for some reason, she falls into that and can see flickers of something beneath and is kind of fascinated by that, although also frustrated by it.

So it was interesting playing around with when those layers start to go back a bit. Because you meet him and he's kind of in a place of recovery. It was interesting thinking about when he begins to be able to grow again and heal a little bit. He might seem distant, but I think he's just quite fragile. It's really through his growing relationship with Frances that there's a space for him to heal. It was interesting seeing that growth of coming back to life, or finding happiness in some way, and playing around with when you see flickers beneath the surface of something deeper. And then when that door is closed and then starting to strip those things away. I'm not sure that's very articulate.

Alison: I think with Frances, I felt like I'd never read a character like that, that was allowed be that reckless, but also really kind of endearing. I just felt like she was a million different things. Sally is really brave in her writing, because she's not writing characters to make them really likable, admirable, brilliant people. They are that, but then they're also flawed, and I think Frances just felt really real to me. I felt like I could imagine her so much. And I think at this stage in her story, when you meet her, she's in a lot of patterns of behavior, with her relationship with Bobbi and with her sense of self and going through a lot of changes.

I think she doesn't really know who she is, and she finds a lot of identity in this relationship with Bobbi and kind of takes her lead a lot of the time. And so when Nick comes into the picture and shows interest, that is just mind blowing for her and also so exciting and something so new. And obviously the only person in her life that she's ever had a relationship with or has I think shown interest in her. And so, because she has such a low opinion of herself, I think another person showing interest, she can't help but grab onto that. And it ends up really consuming her. I think she's kind of addicted to that feeling of love or validation, and that takes her where it takes her. But I just find it really moving and compelling to see her go on that journey and make the mistakes that she does and lose herself amidst the chaos of it.

And while all that's happening, I think because she knows she's doing something that maybe might cause judgment or any of those things, she really just develops this really defense withholding wall. When you do see her at the end, I feel like she has gone on such a journey. I just thought that was amazing and constructed so well, and was so interested in all the different dynamics that she had with the different people in her life, and how she could become a different person with each person.

There’s so much depth to the characters, and as both of you mentioned, so much going on beneath the surface that is told through glances and pauses rather than dialogue. How did you work out the subtext of each scene and bring it to life?

Joe: We did talk about it a lot. And Lenny talked about it a lot, and we were invited into that conversation from very early on, even from being cast, because we had a few months before we started shooting because of the pandemic. You're right, I mean, so much of Sally's books and characters, they're not great at communicating, and it's about as much what isn't said as what is, or people trying and failing to say something or work out what they feel. So we did talk about that a lot. And Lenny is so big without being overbearing on the detail of every moment. She wants to investigate of what it could be, even if you're not saying anything.

At the same time, I mean, like with anything you'll find those moments when you play them and you might think something, but decide you don't tell the other person, or they might do something, obviously that completely changes how you respond. So it was a bit of everything, but I love that her characters are like that, and that aren't necessarily great at communicating and aren't good at speaking what they feel or think. I really like that.

Alison: I even feel like dramatically, it's just really interesting to watch someone squirm or try to communicate something through a look. It's so much fun to play that and also to watch it and try and see what's happening.

Conversations With Friends is now streaming on Hulu.