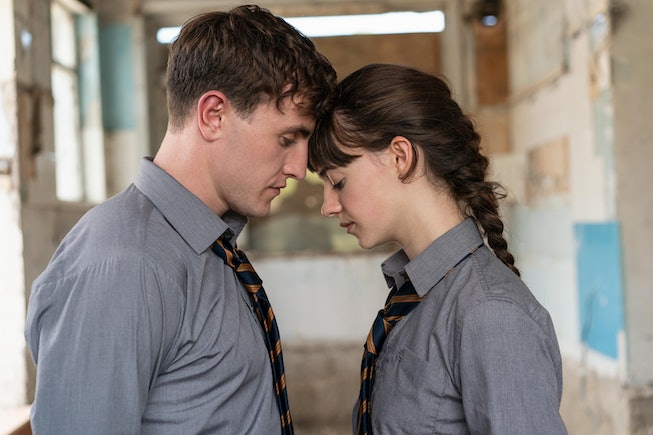 Sally Rooney's 2018 hit Irish novel, Normal People, tells the intimate story of Marianne and Connell: two intelligent, young, class-divided people who dance in and out of each other's lives over the course of high school and college. As they grapple with their feelings for one another and their different positions in life as influenced by gender, status and society, they also have lots (and lots) of sex. Having been adapted into a series for Hulu, Normal People uses the petri dish of Marianne and Connell's relationship to reflect on bigger themes. But the heart of the series beats with the love Marianne and Connell have for each other, however healthily it's expressed.

A few days before the series premiere, NYLON talked with Daisy Edgar-Jones, who portrays the shy and complicated Marianne to Paul Mescal's extroverted, yet brooding Connell. Edgar-Jones opened up about preparing for the role, getting to know Mescal before filming and how working with an intimacy coordinator helped make filming realistic sex scenes in a safe environment possible:

NYLON: What first drew you to Marianne?

Daisy Edgar-Jones: I loved how she had this deep inner life. It's the first time I'd ever read a female character that was so incredibly flawed and complicated. She's a very kind and lovely person, I truly believe, and I think she has a lot of darkness inside her. There was a lot about Marianne that I really related to, especially school and her relationship with the social ladder, and what that meant. But there was a lot about Marianne that I didn't kind of understand. So it was quite cool to try and understand those sides of her that were a bit darker.

The chemistry between Marianne and Connell is really what the story all hinges on. Did you and Paul [Mescal] get a chance to know each other before filming?

We were really lucky that we got a couple of weeks rehearsals before we started filming, so we actually got to get to know each other in some capacity. Which was good, because it was a long time to be spending with someone. Sometimes with acting, you meet someone on the first day and then you have to do a scene with them, it's a bit strange. So we were very lucky in that way. We both had a very similar understanding of the characters, which was really helpful because it meant that when we came to a scene. it always felt like a very easy sort of dialogue, and we understood each other's rhythm. But yeah, we just became really good friends because we spent so much time together.

Both in the novel and the series, the sex scenes between Marianne and Connell are so intimate and complex. How did you prepare for those?

I was a wee bit trepidatious, because I hadn't had any experience with that before and you never really know how it's going to kind of, what it's going to look like. But I always knew that they were really important. They're so beautifully written in the book, and they're a really important part of the story between Marianne and Connell. And we really wanted to do them justice. I just feel very, very lucky that we got to work with an intimacy coordinator [Ita O’Brien] who was wonderful. I can't imagine anyone having to film intimate scenes without having someone there to look after it. It's like doing a stunt without a stunt coordinator. I just can't imagine anybody being asked to do that. And we were very lucky that we felt very safe on set, both with [directors] Lenny Abrahamson and Hettie McDonald and all the crew and Ita. She just created an environment that was pressure-free, which enabled us to concentrate on the narratives that we were trying to put forward. And I liked that the sex scenes were never sort of for the sake of it, they're never just because they want to throw one in. They're always carrying on a narrative and the story beat and they're very important to their relationship. We had a lot of love behind the camera, which made us feel that we could kind of do those scenes justice.

It feels so rare to see a sex scene, especially among characters that are very young, that is done in a way that's so realistic without being gratuitous or even traumatizing to the audience.

I think that's why people really found it quite striking in the series. It shows a depiction of sex that is very real in all its forms. And I think particularly in their first time scene, the fact that Connell was very concerned about consent and they use protection — it's very rare that you see a scene that is both beautiful and tender and sexy, but also has those elements in it. There isn't kind of, billowing sheets and warm candlelight. It's very awkward. You know, Marianne's bra gets stuck around her arms. It's bubbly and they kind of make hesitant conversation before it happens when they both know why they're there. It's a very healthy depiction of sex.

How much of that was coordinated or choreographed, and how much was improved by you and Paul?

Well actually all of that is completely coordinated, by Ita. Her job was to really work out in detail the physical beats. It's like a dance really, and allows for you to have a real boundary that you're in. There's never any chance that there's a gray area and you over cross something. And that's really important in order to act the scene and create the idea of it being spontaneous, because you can relax a bit more into it when you know that you're a hundred percent safe.

Especially as a younger actor, I'm very... I mean, it's my first main part in anything, and working with Lenny who's this amazing director, it was so wonderful to feel that he was really keen that we never felt that we were under pressure to please him or do anything. He always wanted us to feel 100% comfortable with everything and safe in what we were doing. I'm really glad that I've had that experience, because if I were to ever do it again, I'm not sure if I would, but if I were, I would know exactly the way it should be run.

Which part would you not do again?

I think I would never, again from learning from this experience, I would never want to do a scene if I ever felt it was just thrown in for the sake of it. I think that these kinds of scenes can be really powerful when they're used at the right time, and they're used for the right reasons. I wouldn't want to, unless it's 50/50 nudity as well. And that's something that I'm really proud of in the show, because often women's bodies are very sexualized. And in this show, I don't think Marianne and Connell are ever sexualized. The nudity is always incidental. It's like being in a relationship.

It's an equal thing between Paul and I, which I just think is so important. And the way it should be now. We shouldn't live in a world where there's never a balance in that kind of thing.

Hopefully this will help set that precedent because it's definitely resonating with people already. There are always high expectations when translating a beloved novel onto the screen. Did you feel pressure to portray Marianne a certain way with those readers and fans of the book in mind?

Definitely. I'm an avid reader too, and I'm an avid fan of the book, so I completely get how it would feel to watch those characters come to life. Sally [Rooney] writes in such a way that when you read the book, you really feel that you are in their world. It's a special kind of journey you're on with them, and to have that opened up must be a bit strange. I think Lenny and Hettie have done such an amazing job of capturing the tone of the story and being really brave with it. I think it is quite an accurate adaptation, I hope. I think that's a bit of a feat considering the book is wholly internalized and interior monologues, to a medium where you don't have the insights of a person's thoughts. I would say even if you've never read the book and you've watched the series, you still have to go and read the book, because the experience of reading the book is the most special one and such a gift.

Was there any particular scene or episode that was the most challenging to film?

Yeah, I mean there was quite a lot of it because, as I said, I was a big fan. So it was so strange sometimes coming to a scene when you had read it, and really had a real vision of it. And you're thinking, "Oh gosh, I really hope I can do it because I just love the way it's written." The particular ones that stood out in my head were when Marianne and Connell meet for the first time in Trinity again. Or their first kiss. Or when Connell comes home and he comes to Marianne's with a busted lip and they realize they've misunderstood each other. Those kind of scenes.

The Sweden stuff, as well — where Marianne's in a bit of a darker place. It was quite an interesting thing, because it's quite open in the book. I love that Sally never really draws a conclusion as to why Marianne is pursuing certain things. So it was trying to make sense of that. Stuff like that was probably the most challenging.

That makes total sense. What are your hopes for Marianne at the end of the series?

I think with Marianne, what she mostly is struggling with is this idea of herself that she has, which is incredibly negative. I think she believes, and does throughout most of the series, that she is this ultimately cold and unlovable person, which she isn't. And I think she feels she doesn't deserve the goodness that she gets from people like Connell. So I hope that she remains able to believe that she deserves kindness in her life. I don't believe that she needs to be this incredibly happy and extroverted person. I think as long as she's happy just being steady and comfortable and not feel unworthy anymore — that's what I hope for Marianne.

Normal People is streaming on Hulu.