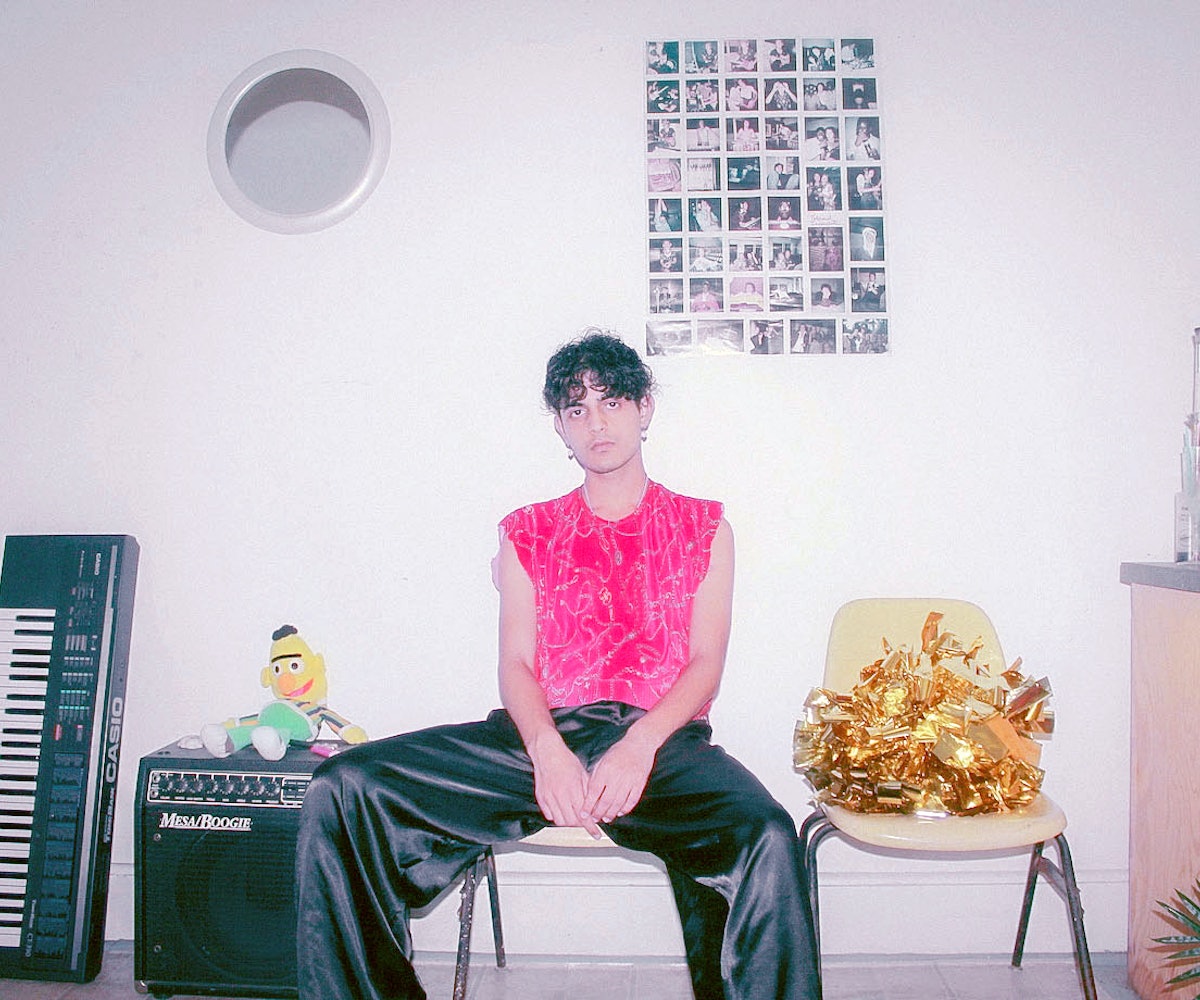 On Dec. 31, 2017, eight months before Curtis Waters was set to start school at the University of North Carolina at Greensboro for media studies, he made a New Year's resolution of sorts. “Im spending New Years alone just working on music. Getting better. It’s not my time yet, but my time will come soon,” Waters wrote in a frank and open Instagram post. “I'm working hard and the world will know eventually.”

Two and a half years later, Waters is finally cashing in. When he cheerfully blinks onto Zoom one August afternoon with heart-charm hoops dangling from his ears, he’s still riding the high of receiving a new laptop he’d purchased. “I just wanted to treat myself,” he says while shrugging simply.

In the span of a few months, the young talent from Cary, North Carolina, has become one of 2020’s breakout stars, thanks to his explosive hit “Stunnin’,” which took off on TikTok right as the world shut down due to the pandemic in April. The song, a groovy and cocky anthem about being a “bad boy, McLovin,” has soundtracked more than 1.4 million videos on the app. Most of those were ushered in by the popular “What I’d wear if…” trend, which spurred creators like Dixie D’Amelio and Paris Hilton to curate different fits they’d wear if they were DJs or, as Hilton cheekily wrote, “living the simple life.” By July, the song had garnered more than 50 million streams on Spotify. “We just beat crazy frog what the f*ck,” Waters wrote at the time, commemorating the milestone with a screenshot on Instagram.

“It was really calculated, to be honest,” Waters reveals now, reflecting on the song's exponential trajectory while fiddling with a Minions figurine. “I was looking at BoyBoy West Coast, I was looking at so much stuff, and I was writing down what's going to work, what's not going to work.”

Although much of “Stunnin’” blowing up was a viral fluke, a not insignificant part of its success had to do with the years of grinding and strategizing on Waters’ part as a small-town musician desperate to make it big.

Born in Nepal to parents who were getting Ph.D.s at the time, Waters and his family led a pretty migratory few years, living in India, Germany, and Canada before eventually settling down in North Carolina when he was 17. Waters remembers writing a lot of poetry as a child in a bid to emulate his father, who was once a poet. By 14, Waters had put down the pen and picked up beat-making via instructional YouTube videos, inspired by watching Tyler, the Creator and the Odd Future crew make it big off of what “could be objectively considered bad music,” he says. “It's a bunch of weird kids like me making music. That just gave me so much hope, like, ‘I can do the same thing.’”

When it came time for college, Waters had already amassed a tight catalog of songs and a few thousand followers on Spotify. After a few emotionally difficult years, he was on a mission to turn his life around and make it big. “The first day I'm like, ‘I'm not graduating. I have to blow up,’” he recounts. “I was grinding my music so hard. I was ready for the day.”

The very first “Stunnin’” TikTok made was by Waters himself. It features him and his brother doing a simple, choreographed dance to the song in front of their garage, as text on the screen introduces him as an artist: “hi im curtis waters, im an artist from NC.”

Though Waters missed the mark on how he’d blow up (sadly, his dance never took off), he nailed the type of irreverent bop that goes viral on the internet. “I was just having a bad day,” Waters says of how he wrote the track. “I was like, ‘Let me say the dumbest, stupid, fun things I can say.’ ... I just wanted to giggle. I didn't think I was going to release it because I just thought it was just a joke song."

Ask him about the track now and Waters gives off a distinct air of trying to gain some distance from it while also stressing how grateful he is that it changed his life. “I am so much more than one song,” he says. “I have albums and albums and I want to be here for decades making so much music, and I just don't think it's fair to box me into a category off of one listen.”

His subsequent releases like “Freckles” and “System” swing the pendulum from sweetly earnest pop to a frizzed out trance rager about how he’s going to “f*ck the system up.” His upcoming debut album, Pity Party, out Oct. 9, also runs the gamut from woozy bedroom DIY to trap-pop to emotional punk nostalgia. (Pity Party will technically be a re-release as Waters shared the project in February, then took it down once “Stunnin’” took off, realizing he could do a full-fledged rollout with more resources.) The throughline in these 12 disparate tracks remains Waters’ distinct point of view, simultaneously self-deprecating, sincere, and disarmingly honest. “Shoe Laces,” the wayward and unbarred album opener finds Waters lamenting: “I’m the shame of the family / I’m full of doubts.”

“It was so important I made [Pity Party] before “Stunnin'” blew up,” Waters says. “I listen to the first track sometimes and I'm just like, 'Wow. You made it. Everything you're worried about in this song, you don't need to worry.'"

In the meantime, Waters is staying independent, content with banging out new tracks and experimenting in his bedroom, where it all started. (When prompted if he’s worried about his finances, he just grins and says, “We good.”) Two years ago on Instagram, Waters painted a distant future of what life would be like when he’s finally rich: Daniel Johnston art hanging in his home, a cool customized Mini Cooper that “works with my outfits,” a swimming pool, a slide too, and all of his friends to “live with me in a big house.”

“I look at that post sometimes,” Waters says. “I'm glad I'm not too embarrassed to share all that stuff because everyone can look at it and be like, ‘We did it. Yeah, we did it.’”