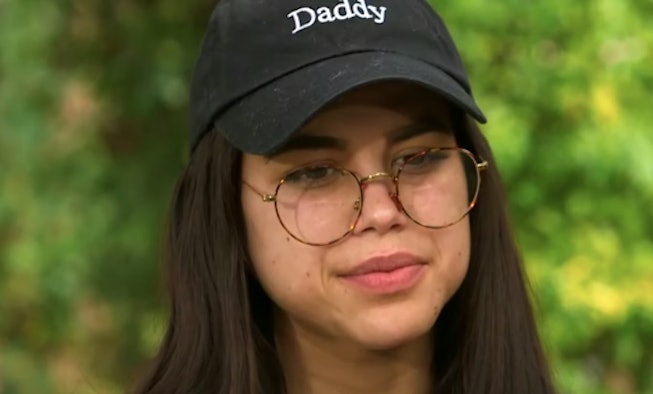 Miya Ponsetto, the 22-year-old woman who was filmed tackling the Black teenage son of a prominent jazz musician on December 26 after falsely accusing him of stealing her phone, gave a bizarre interview to Gayle King in which she defended her racist actions, boldly wearing a baseball cap that read "Daddy" to do so.

In the now-viral video, Ponsetto harasses, berates, and finally tackles 14-year-old Keyon Harrold Jr., the son of Grammy-winning jazz trumpeter Keyon Harrold, in the lobby of the boutique Arlo Hotel in Manhattan.

In the exclusive interview Ponsetto gave to Gayle King, she admitted to attacking the Harrolds, but didn't take responsibility for the way things went down.

"The footage shows me attacking his son, attacking him how? Yelling at him, O.K., I apologize. Can we move on?" she said. "Basically I'm a 22-year-old girl. I am, I don't — racism — how is one girl accusing a guy about a phone a crime?"

Ponsetto also admitted that she could have possibly handled the situation differently, saying, “Maybe not yelled at him like that, and made him feel you know, some sort of, uh, inferior way, making him feel as if I was like, hurting his feelings — that's not my intention,” Ponsetto said. “I consider myself to be super sweet.”

King wasn't convinced, noting, "I know you've seen the video, when you look at the video, the reaction seems very extreme. It doesn't seem like it's someone who's 'super sweet.'"

The rest of the interview only gets worse, with Ponsetto coming off as basically without remorse. Toward the end, King tells her, “You’re 22 years old, but you are old enough to know better,” at which point Ponsetto cuts her off with a dismissive hand wave, saying, “All right Gayle, enough.”

Ponsetto's otherwise silent lawyer then turns to her client and says, "Stop, stop" tensely, speaking for those of us watching at home. Ponsetto was arrested on Friday in California, for as of yet unknown charges. The incident sparked investigations by both the New York Police Department and the Manhattan district attorney's office.

The interview has naturally caused a massive stir online. For what it's worth, famed podcaster Alex Cooper clarified that the "Daddy" hat was not official "Call Her Daddy" merch. Rather, it looks like on-sale Urban Outfitters — and it appears the retailer has since made the hat unavailable on its website.