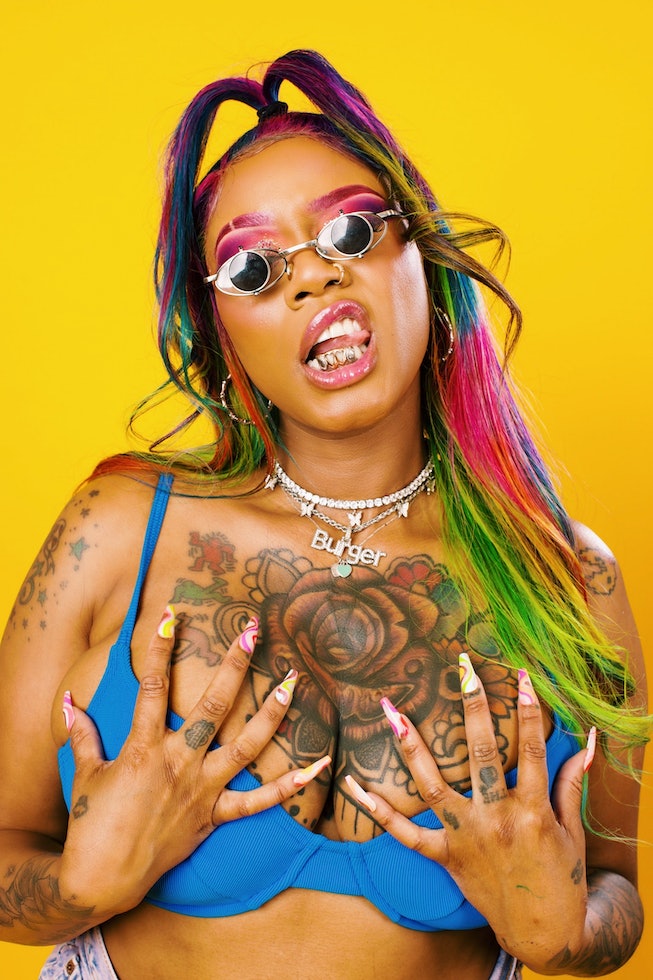 Queens rapper Dai Burger has spent the past decade creating and refining her own unique club-based sound, exemplified on her 2019 sophomore album, Bite The Burger. Now, she’s back with a new single “I Luv U,” featuring fellow NYC artist and former mayoral candidate Paperboy Prince. The video for the song, which is off her forthcoming album Back In Ya Mouf (out December 10th), celebrates Burger and her friends in all their colorful glory.

“I heard of and met Paperboy Prince through a friend of mine," Dai tells NYLON of her collaboration with the artist on “I Luv U.” "I was so amazed and impressed with what he was doing for the community and the message behind it all. I knew a track called ‘I Luv U’ would work more than amazing for us. P.s. Paperboy for Mayor!”

"In Ya Mouf was my break out EP and one of my most influential projects to date,” Dai says. “It was a collaboration with Mighty Mark, legendary Baltimore Club music producer. This project was only released via the internet in 2014, before streaming was a prevalent form of music distribution. So, I linked up with Mighty Mark for Back In Ya Mouf, this time to re-release some of the classics and add new tunes following the B-More club meets NY Sass format we’ve mastered oh so well.”

The video for “I Luv U,” a ferociously upbeat track that’s all about love and loyalty, features Paperboy’s Love Gallery on Myrtle Avenue — an interactive space dedicated to community building, mutual aid and a celebration of the neighborhood.

Watch the video for Dai Burger’s “I Luv U” and stream her most recent LP, Dessert, below: