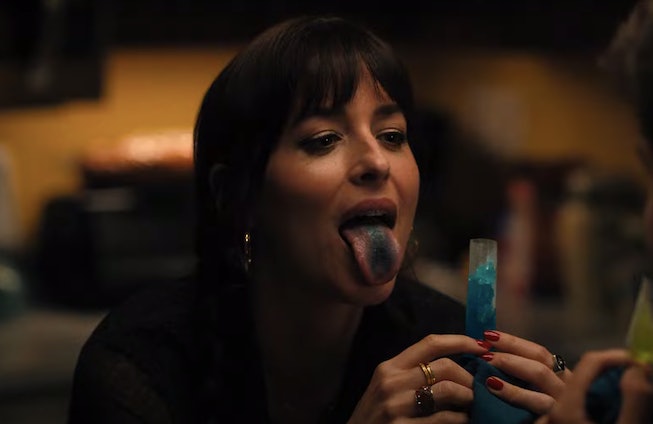 Maybe it’s just me, but lately, all I’ve wanted to watch is a good old-fashioned rom-com. In a sea of endless reboots, dystopian flicks, and chilling documentaries, I’ve craved the comfort of seeing two strangers meet under unlikely circumstances that lead to an epic love story. Thankfully, Dakota Johnson and Cooper Raiff made a heartwarming antidote to my dreary streaming options with their new film Cha Cha Real Smooth.

The romantic comedy explores what might happen if two adults hit it off at a children's party. “Fresh out of college and stuck in his New Jersey home without a clear path forward,” the synopsis reads, “22-year-old Andrew begins working as a party starter for Bar/Bat mitzvahs — where he strikes up a unique friendship with a young mom and her teenage daughter.”

Cha Cha Real Smooth was directed by Raiff, who also plays Andrew in the movie. The movie originally premiered at the 2021 Sundance Film Festival where it won the Audience Award. This is Raiff’s second time directing a feature, following the success of his 2020 breakout hit Sh*thouse. According to IndieWire, Johnson saw his directorial debut and was so impressed by his work that she asked to help produce Cha Cha Real Smooth, after joining the cast.

The upcoming film also stars Leslie Mann, Brad Garrett, Evan Assante, Vanessa Burghardt, Raul Castillo, and Colton Osorio. Though the movie is largely about a complicated romance, Raiff explained that Andrew's odd career speaks to a larger struggle of navigating adulthood. “My 20s are very much like Andrew’s own 20s,” he said in an interview with Indiewire, “It’s the time when you have to start your own parties, so I wanted to write a character who is not good at that. He’s great at setting other people’s parties. And I relate to that.”

Apple TV+ purchased the film after its Sundance debut. Cha Cha Real Smooth will premiere in select theaters and on their streaming platform on June 17th. Until then, check out the film's first trailer below.