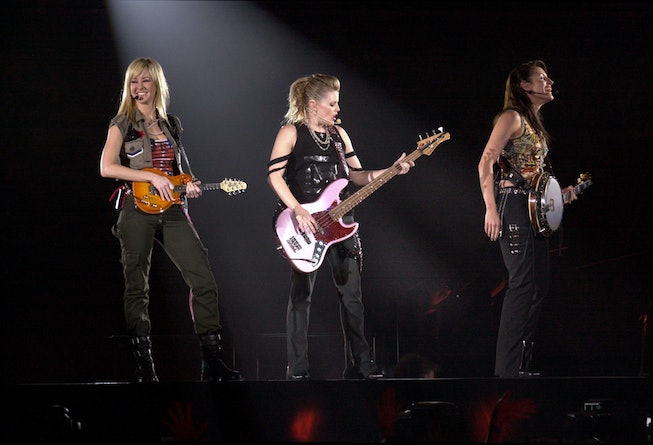 This just in: The Dixie Chicks are now going by just The Chicks. The award-winning country trio of Natalie Maines, Martie Erwin Maguire, and Emily Strayer unveiled the switch on Thursday by changing their name on their Twitter handle and their website. The group has not yet publicly commented on the name change, however their website does include the short statement: "We want to meet this moment."

Per Rolling Stone, The Chicks wrote in a press release: “A sincere and heartfelt thank you goes out to ‘The Chicks’ of [New Zealand] for their gracious gesture in allowing us to share their name. We are honored to co-exist together in the world with these exceptionally talented sisters. Chicks Rock!”

The Chicks also shared a new song on Thursday titled "March March," a protest anthem of sorts that finds Maines singing lyrics like "Watchin’ our youth have to solve our problems/ I’ll follow them so who’s comin’ with me" over a pounding beat.

The track comes off of their forthcoming studio album Gaslighter, from which they've already debuted "Julianna Calm Down," and the title track which was produced and written by Jack Antonoff. Antonoff also serves as writer for "March March," along with Ian Kirkpatrick. Though Gaslighter was briefly postponed due to the COVID-19 pandemic, it has since been rescheduled for a July 17 release.

A few weeks prior, Nashville pop group Lady Antebellum publicly announced their name change to Lady A, a move sparked by the countrywide protests that began after the police killing of George Floyd. "Blindspots we didn't even know existed have been revealed," Lady A wrote in a statement at the time.