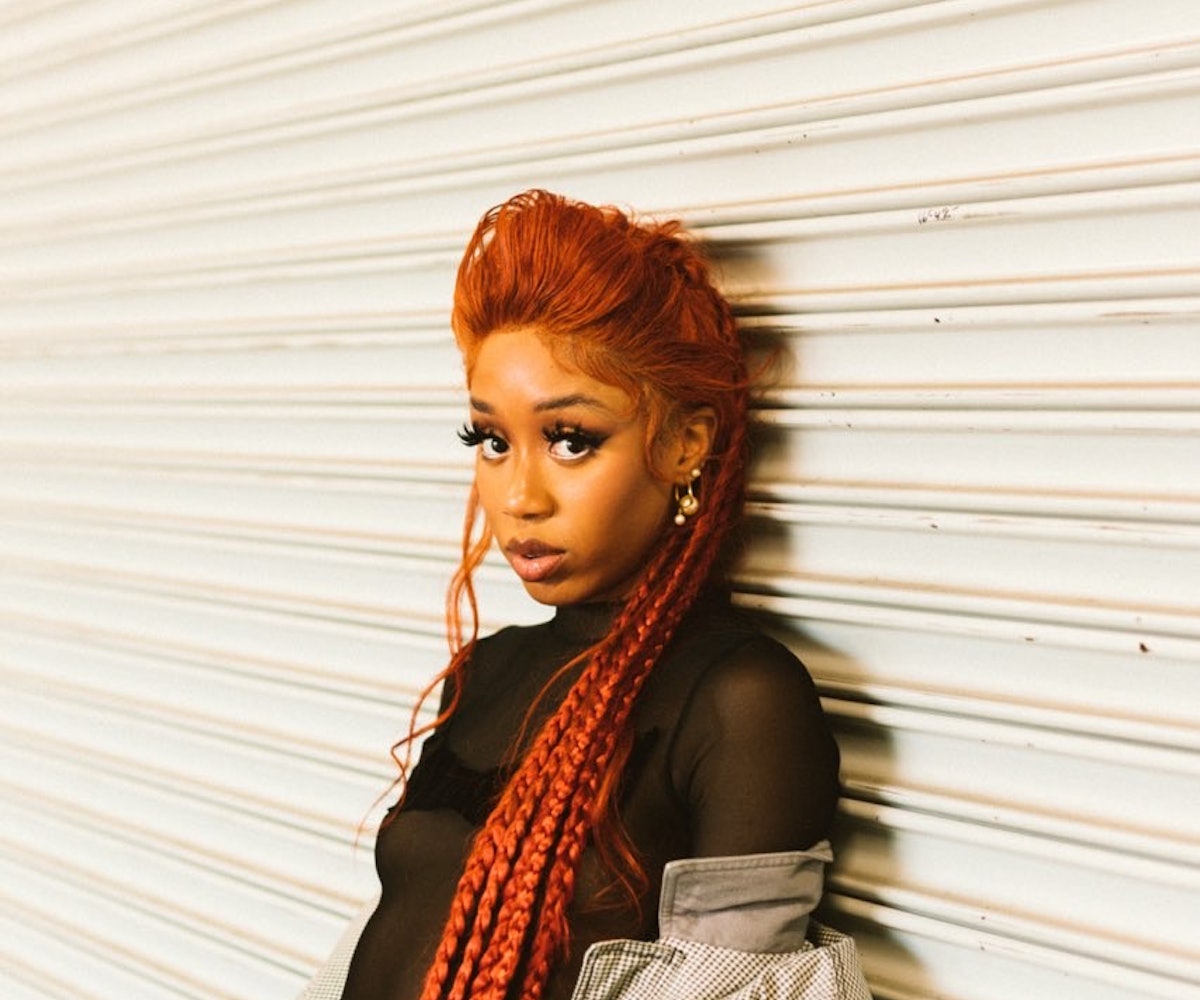 Kitty Ca$h is an artist, producer, DJ, and universe all unto her own, having worked with everyone from SZA to Rihanna. In the midst of one of the most destabilizing pandemics of the modern era, Ca$h worked to find and reclaim a happy space for herself and others, combing through the archives of her text messages and the routines that have long brought her comfort.

Through that excavation arrived Kitty’s World, a new IGTV series, and digital reinvigoration of the feeling of running home to watch the BET classic talk show Cita’s World from the early aughts. Reprising the titular role through a contemporary lens, and pushing the vanguard of couture, digital collation, vulnerability, and community, Ca$h created a bridge between generations through the purview of an avatar — each episode a reflection of the different layers of a Black woman’s experience, anchored by contemporary music. From challenging gender norms to honoring the Black Lives Matter movement through music, the cultural innovator worked to bring prescient conversations to the forefront of her animated series through a combination of uninhibited creativity, sharpness, and trust in a collective vision of voices.

NYLON recently spoke with Kitty Ca$h about the series and her hopes for the next season.

When did you first start thinking through this idea?

It started when COVID first hit. Realizing that I would not be able to be outside was very daunting because I am a child of the night. I love being around people, I love the energy. Still, wanting to live in the space of being a curator and being around music, and being abreast of what's going on in the news outside of just COVID — I still want to be able to talk about music and culture and other things that we are having discourse about. Then I just did my research on some animators, and I found Liniya and it just came together so seamlessly.

As someone who grew up watching 106 & Park and Cita’s World, I was excited to watch it. You got a whole gang of girls together to put this together.

Yes. Our animator is Black and trans, and then our writers were all Black women. I thought it was really important to put together a collective of women that have very polarizing opinions, but are also very aware of the environments that we live in. One of the writers, she's an activist and a body positive model, so she is always speaking about that — you know, “Ca$h, you've been slim all your life. I understand you don't think about [expletive] like this, but it's very real for me in my reality that I'm not accepted in certain circles.” I didn't want to feel like I was leaving out any part of our community because I'm not living in that reality every day.

What were the hardest parts to lock in before even starting the episodes?

The hardest part and biggest lesson is not being a perfectionist. For so many creatives, we have ideas all the time, and execution sometimes is the hardest thing to do because you want it to be perfect before you release it into the world. With this, there were so many kinks and things that went wrong. I mean you are trying to do a whole animation of yourself from scratch. I was like, “It's not going to be cute, unless it's my face and my outfits.” We loved Cita because she was funny and cute and, like, a chocolate drop, with those little crop tops and miniskirts, and I want to bring that into my space. At first it was very much like, I'm doing too much. And then it was like, actually, this was genius that you did too much, though.

The second episode took like a very abrupt shift in energy, starting with George Floyd and honoring him through music with the Screwed Up Click. Was that done in response to what was happening outside?

We actually had a whole different episode that was going to launch. I was outside protesting back to back in LA, and I literally told the team, “Hey, I don't know who's in the streets, who's not in the streets.” You know the animator, she's Black and trans, she told me she didn't even feel safe, and that alone was a lot. I was outside living and breathing it, and I literally called the team and I was like, “I'm not doing an episode unless we're talking about what's going on.”

A lot of my friends overseas told me after this episode came out that it allowed them to understand the sentiments that we were going through, and I thought that was so beautiful. But honestly, it was just a reflection of how I felt in the moment, and maybe because she was an avatar, this is an interesting way to dissect and intake this information. I felt like it was the only thing we could do as Black women. Having this show was to speak about it in real time. Transmuting that pain into art and encapsulating the times. I was really proud of that episode — that episode also gave me the confidence and the realization to be like, “Wow, people are paying attention, and they're listening.”

The hardest part and biggest lesson is not being a perfectionist.

What I think is a consistent theme, even in the more socially aware episodes, is that, no matter the topic, you’re going to make sure that everyone’s actually having a good time.

That’s because of this group of women. Even though we're talking about real life, heavy conversations — I think it's the way that only Black women could really commune, make light of and joke about our weaves but then literally in the next 30 seconds, you know, reference Toni Morrison and then jump back into City Girls or Lil’ Kim… It always reminds me of the type of women that I grew up with that have all of those layers, and they're able to not compromise who they are.

I think it's also a really positive way to engage the younger generation, the way you did that episode around sampling. One of the things that I think is a little strange is how people are angry at Gen Z kids for not knowing things.

I think it's like a person going to a museum for the first time. It can be a bit scary, or can be pretentious. You start to give information and contextualize. I'm at a very specific line in between generations, you know, I knew life before Instagram, knew life with a Nokia 33. I had the Motorola Razr, I had a Sidekick, so I can speak to the younger generation, because I also understand it. But I can also speak to an older generation and have respect for the generation even above me because they're my mentors, so I can bring context. Like how we know Cita’s World. A lot of the young kids are like, “Oh, I never heard of that.” The samples episode was fun because so many people were like, “I had no idea,” and it's like, "Of course you wouldn't. You're like 13! What the hell do you know about Johnny Gill, child?"

The education part of it is really fun and also reeducating myself, or learning something new for me is also so much fun. It’s like making a playlist for me every week, and then actually digging and diving deeper behind that playlist and then talking to y'all about it; that's kind of how I look at it. When you have a platform period, if you can educate anybody on anything, I think we owe it to our audience, you know, in ways that's true to us. So, whether it’s with fashion or it is with culture or with books that I'm reading or anything like that, I'd love to share that.

That in itself is an interesting case study for me — how people are taking to the avatar and are able to digest the information that comes from the avatar versus a human, real person.

You were willing to expose so much of yourself in a time when everyone is talking about protecting Black women. How did that feel — having you and your team come together to share more of yourself and your point of view in a time when people feel like that kind of protection isn’t necessarily there?

I was a little scared. Like many Black women, you have your sisters, whether they're blood or chosen, as your biggest cheerleaders and supporters and protectors. My team — I love them so much because I am so raw and real and very hands-on and so are they, and everyone's like, “Hold back for what?”

I love the show because it's given me the confidence to be OK with sharing those parts of myself. When you go online and you see how quick people are to rip somebody down for something that they said, it doesn't feel like a safe space to come out and be opinionated all the time. We are human, yet there's barely any room for human error, especially on social media. I definitely felt like I had to take a chance on myself, and believe that “Hey, this is who you are” and I need to be more open in this space regardless, because I am very vocal and I do have a very strong perspective.

Do you feel like it's safer to express more of your personality through the digital avatar of yourself?

Yes. It’s like an alter ego that I can turn on. I may not have all of that, like I give her some more hips, [but] this is how I am in my mind. Having the avatar is almost like having something to protect you because it's not my face always there. And I think, for whatever reason, people also take to that a bit more, because it is a bit intriguing and a bit funny, but she's saying real shit as the voice of a human person. I think that in itself is an interesting case study for me — how people are taking to the avatar and are able to digest the information that comes from the avatar versus a human, real person.

For someone who's coming into seeing Kitty's World cold, what would you want them to take away from the experience?

I just want them to take away that this is a show created by a Black woman with a crew of Black women that have a very strong perspective on culture, music, history, and art, and that we are just creating a safe space to share these thoughts, get feedback. And have a good damn time while doing it.

NEXT UP
Entertainment
NCT Teams Up With Sanrio For Their Next Merch Launch
Entertainment
Machine Gun Kelly Opens Up About Reported Miscarriage On "Last November"
Entertainment
Soccer Mommy Balances Resilience & Resignation On Sometimes, Forever
Entertainment
Hunjiya Strives For Better Communication On "Talk2Me!" & "Favorite"