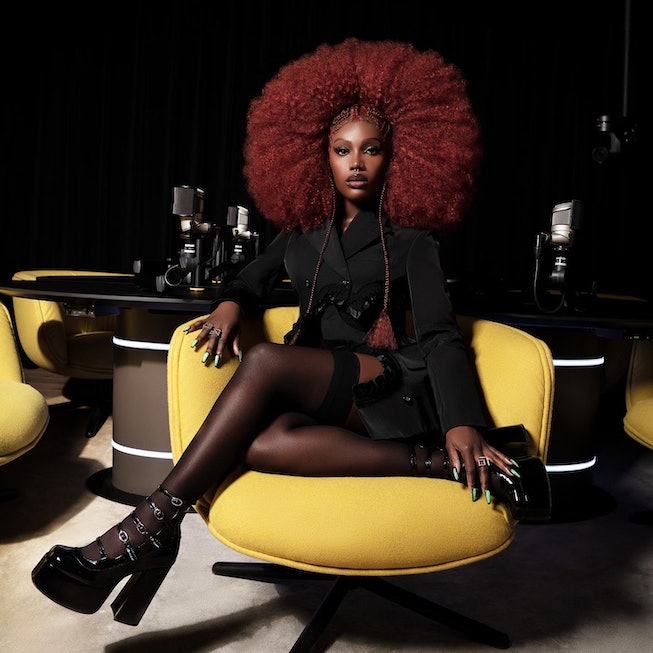 It’s fitting that Doechii’s breakout project is focused on what happens after you leave school, because everything about her warrants the “Most Likely to be Famous” yearbook superlative. Originally from Tampa, the 22-year-old artist born Jaylah Hickmon scored a viral hit in 2021 with “Yucky Blucky Fruitcake” and its kaleidoscopic music video, which recalled the surreal work of Tierra Whack or Missy Elliott.

Since then, she’s opened for SZA, collaborated with Isaiah Rashad, and released the Bra-Less EP, an eye-opening project that cements her rap bona fides. “The labels treat my talent like a secret weapon / And I'm a force to reckon, just gotta accept it,” she says on “PMS,” but the secret is clearly out. “I have my next five years planned out,” Doechii says. “I would sit down with people and they would be shocked that I have my next three albums already conceptualized.”

Doechii has officially joined the ranks of Top Dawg Entertainment, and it’s not hard to see how she fits into the the same infrastructure that helped give us idiosyncratic stars like Kendrick Lamar, SZA, and SiR. But someone this fiercely in command of their craft doesn’t take the decision to sign a deal lightly, particularly after Doechii was being courted by several labels following the viral success of “Yucky Blucky Fruitcake.” “With TDE, we have the same vision about where I’m going and what I’m doing and they support it. It feels great to have that machine next to me, but I was prepared to be that machine with or without [them],” she says.

Her debut album is on the horizon. And even though the stellar Oh the Places You’ll Go EP served as a fitting introduction to Doechii’s sound, it’s clear she’s already in a different creative place just 18 months later. Her new song “Persuasive,” out now, is what she calls, “the perfect song to play on a rooftop at midnight.”

Here, we speak to Hickmon about her upcoming debut album, when she knew she had a place in hip-hop, and advice from Schoolboy Q.

Looking back at some of the songs from your first couple projects, one line that stuck out to me was when you say “Who else you know could break a neck without a push from Vevo?” on “Truth.” It’s a great bar, but also I think it’s a good point that you really did do all of this yourself. You had collaborators, but it’s rare for an artist to reach the position that you’re in largely on their own created momentum.

Oh the Places You’ll Go, that was me 100 percent independently. I spent every last dime I had on that project. I came up with all of the concepts. I hired the team. I bought the studio. I drove the U-Haul truck to go take the props out. I did everything by myself at that time. And yeah, when I said, “Who else could break a neck without a push from VEVO?” those views and the streams, that was organic, I didn’t have a push. That happened on its own and I’m really proud of that.

You have a lot of creative skills beyond making music, and now you’re in a position where a lot of that stuff that you were doing on your own, there are people around you who can do that. Is it a challenge at all now to find that balance of not being the sole person making the machine work?

No, it’s not. One of the biggest things for me when I was independent was that I wasn’t worried about being signed. That wasn’t even a goal. I set up the foundation of my art and my business to where I was prepared to take my career far independently or with a label. And my one thing if I did collaborate with a label was being able to have full creative control and working with a label that believed in me and didn’t want to change what I had going on. So right now, I don’t feel like I relinquished any control. I have a machine next to me, I’m partnered with another business, but it’s my business. I am Doechii with TDE. They love and support my vision.

A lot of labels scouted me after “Yucky Blucky” and I didn’t get that from them. It didn’t reflect in paperwork, it didn’t reflect in the studio. With TDE, we have the same vision about where I’m going and what I’m doing and they support it. It feels great to have that machine next to me, but I was prepared to be that machine with or without [them].

Now that it’s official, the partnership between you and TDE really makes a lot of sense.

It’s funny, because I don’t think I really felt like I was TDE enough. I didn’t even really feel like I was TDE when I first talked to [my manager] Moosa [Tiffith], I felt almost too alternative. I think SZA is super alternative and creative in that sense, but she’s a vocalist. With the rappers on TDE, they’re hip-hop, you know? I can rap and I am hip-hop, but I’m also alternative. It was really cool to talk with Moosa and know that that’s appreciated and almost needed in hip-hop right now.

The Artist’s Way by Julia Cameron was a big perspective-shifter for you. With the new album, was there any specific non-musical art or books that you found inspiring?

I’ve been focusing a lot on home, Florida, animals that I’m inspired by, symbols, and things within and around me. Right now, I’m not really reading anything in that avenue, I’m on superficial sh*t and studying fashion. I’m inspired by alligator skin and just figuring out how I can incorporate that in my album. I’m focused on futuristic sh*t and, right now, I’m just focused on having fun with fashion aesthetics and colors and things like that.

Have you started conceptualizing how you want to translate this next project into a live show?

100 percent. I’m building a world and now that I have a bigger budget and a larger team to support me, I’m getting really detailed about the experience. I am embodying Florida. I’m embodying how I feel as a Black woman. I want to embody how limitless I feel creatively and with that, that has to translate into what I’m wearing on stage. When I’m wearing a costume it has to feel limitless, it has to feel innovative, it has to feel powerful. It has to feel like Florida. So I’m really detailed about how things are when I make my merch. If I have props on stage. When people buy tickets, how they buy those tickets.

My first time being on tour, I realized I genuinely love to perform. Before I went on tour, people were giving me these horror stories about the experience of touring, but I realized that I want to perform every day. That’s why I make music. I love to record and be in the studio, but not nearly as much as I love being in front of fans and connecting with them and performing. That sh*t is fun.

You showed us at NYLON a few songs from the album that ranged from slinky and romantic to really hard-edged rapping. Where do those fit into the overall makeup of the project?

It’s a lot of genre-bending. I genre bend a lot. I do, but not really. It’s like different planets, same universe. I think on my past albums like Bra-Less, that was kinda heavy. Even Oh the Places You’ll Go, it’s fun, it’s cute, but I was still talking about a lot of real shit. And on this album I am as well, but I really just wanted to have more fun and, like, not be so serious all the time… It’s about me showing a lot of power in a different way. I found a lot of power in being vulnerable, and now I’m finding a lot of power in spending money and having sex.