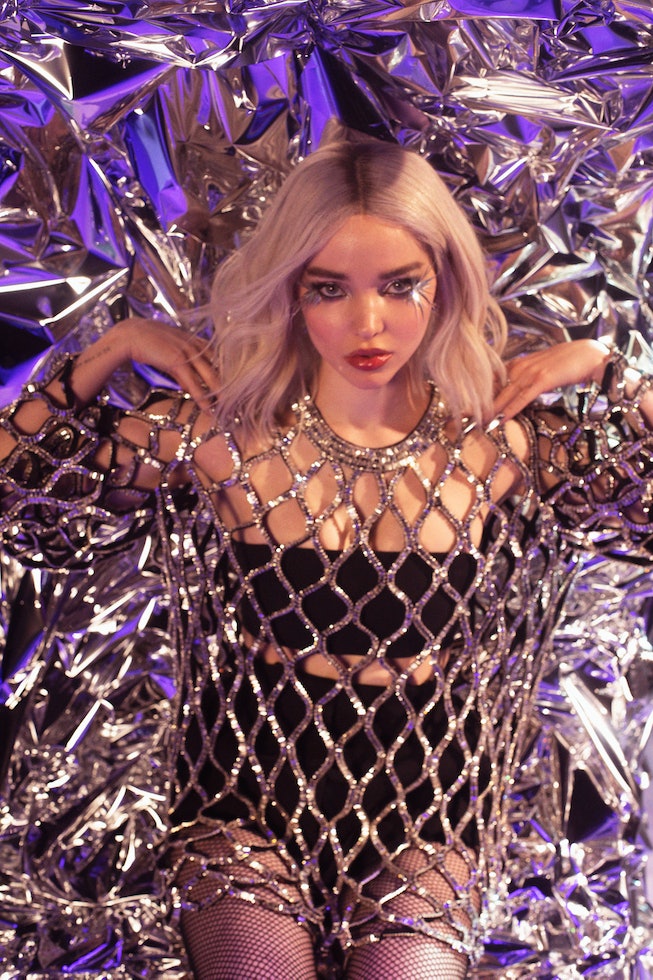 Lately, Dove Cameron has been operating at what she calls “high vibrations.”

“Everything terrible that happened in the whole of 2020 is being rectified by these first three months. Why is that?” she says over Zoom from her Los Angeles home on a recent weekday. “I feel more in touch with my friends and my community than ever, which is the most important thing. Everybody's really started prioritizing each other and communicating intentionally. It's all become very sexy. We're very grown now. [And] I mean, I've got these incredible projects and I'm super passionate about it. I've got this new single that I'm so excited for everybody to hear, and this video I can't wait for people to see.”

The single, “LazyBaby,” out now, is a culmination of all that terribleness of 2020 turning into something positive. “The fact that I got a good song [out] in the last couple months of 2020 puts a nice little bow around it for me, emotionally,” the 25-year-old says. To bring it back to vibrational terms, the song is what Cameron calls a “bad bitch anthem” for “a low vibrational time” following the end of a relationship. “‘LazyBaby’ was born out of necessity for me,” she explains. “I went through a really bad breakup that was completely out of nowhere, so hard for my brain to even reconcile. I was not handling it well, and I dropped off the face of the planet. If I'm doing well, everybody hears about it. But if I'm doing badly, I'm gone.”

Her friends attempted to help in a way that so many of our friends do during similar times: by sending breakup songs to help “heal” the pain. Cameron felt the opposite. “I was like, ‘I don't need help getting into my feelings. I actually need to step outside of them,’” she says. “‘LazyBaby’ was just so incredibly upbeat, it helped me rewrite the story of what was going on so that my nervous system could get to the next step. Obviously the song is about the end of a relationship, but I didn't want it to be a breakup song. I wanted it to be a breakthrough song.”

The disco-infused, bass-heavy track sees Cameron playfully lamenting a lost lover who took her for granted — a so-called “lazybaby.” “‘LazyBaby’ is about someone who's not loving you correctly or well or the way you need to be loved or enough or they've stopped putting the effort in,” she says. It’s a fun track above all, and, as she’s quick to clarify, in no way a diss track towards her ex. “[That term] is not a commentary on my ex as much as that it is just the premise of the song,” she adds. In fact, she even played it for him before it was released on Friday. “I was like, ‘Hey, it's important to me that you know I'm releasing this.’ So I played it for him and he loves it. We're good friends. We love each other forever. There's a lot in the song that is not actually directly about him.”

The song is the first new music release of 2021 for Cameron, with the promise of more to come. In addition to having a number of songs already in the can — “I know what music I'm releasing basically for the rest of the year,” she teases — she’s also happier than she’s been in a long time, meaning she’s more inspired, too. “”When I'm happy and I'm feeling good in my life, songs are popping off left and right,” she says. “Personally speaking, I've had a lot of trauma, true trauma where I have to completely drop off the face of the planet to process the level of agony that I'm in. I think when I'm in moments like that, my system actually shuts down. I have a really hard time writing about it… Right now, I'm surrounded by all my friends and the amount of times that I've been getting ready in the morning and I've said something and they're like, ‘That's a song title, write that down.’ Life is just so beautiful and poetic right now. It's very conducive to the songwriting process.”

Eventually, she hopes to release an EP to start, and to get on the road and tour with her music. “It feels way overdue that I haven't done at least a national tour,” she says. “I really want to see my fans.” But first comes an equally exciting role: In March, it was announced that Cameron would play Bubbles in Diablo Cody’s live-action adaptation of The Powerpuff Girls. “After I got cast, I had to wait a week before the news came out, which was an excruciating week because I'm such a fan of the cartoon. It was so hard not to talk about it,” she says. “I’m so excited to be in jeans and a little blue tank top and then levitate and zoom out of a window. Please. Fighting monsters? But also specifically getting to play the Powerpuff Girls. I grew up without cable and I even knew what the Powerpuff Girls were. I'm a freak for them.”

A freak, sure, but also a good secret keeper. She stops herself before divulging any more information — the first step of a superhero in training. “Diablo's vision for it is so crazy,” she continues, carefully. “I can't tell you too much about it, but it is so exactly what you would want. It's mental.”