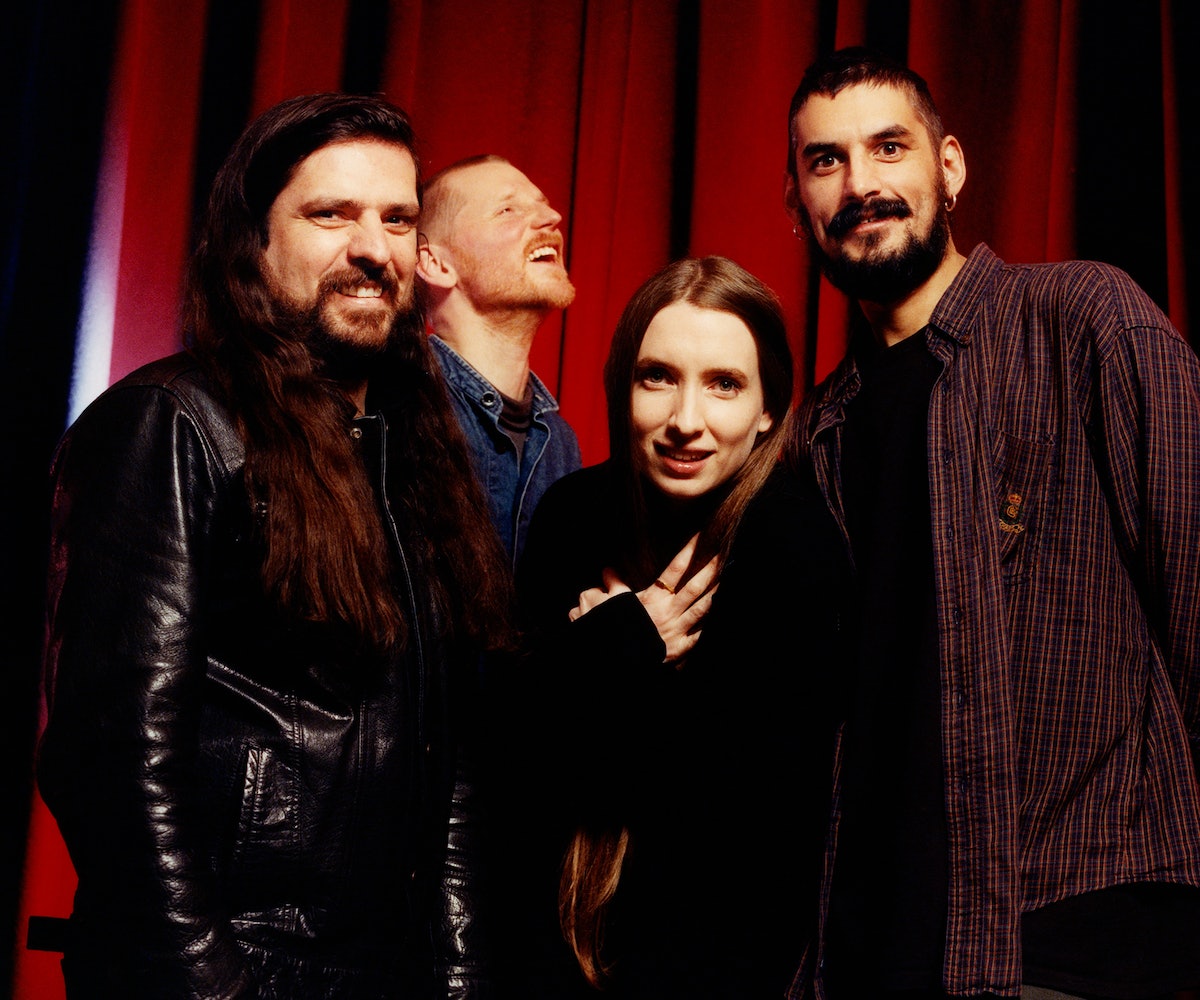 “Brain replaced by something,” opens Florence Shaw in a deadpan at the beginning of Dry Cleaning’s “More Big Bird.” Perhaps no other lyric has quite so accurately captured my mental state for the past year in such few words than this track from the South London band that’s brilliantly merging post-punk instrumentation with spoken word.

Everyday observations, found lines, and cobbled-together musings — all delivered in Shaw’s pleasing and droll monotone — form the captivating foundation of their debut album, New Long Leg, out now. The 10-track project is rife with moments when Shaw murmurs a stray remark that suddenly pricks your ear into alert. Some are simple, like the above, or hilariously specific, like: “I just need to be weird and hide for a bit and eat an old sandwich from my bag,” from the grimy guitar opener, “Scratchcard Lanyard.” At points they sound like the out-of-context and un-workshopped thoughts steamrolling through our heads at any given moment. It’s a surreal dissonance that makes listening to the project oddly invigorating. (New Long Leg also earned Pitchfork’s coveted Best New Music distinction.)

Alongside bandmates Tom Dowse (guitar), Lewis Maynard (bass), and Nick Buxton (drums), Shaw — who’s a visual artist and auditioned into the band by reading from a copy of Michael Bernard Loggins' Fears Of Your Life — is the author and narratorial force of Dry Cleaning. Over video chat from her London flat one evening, she spoke to NYLON about making the album, the band’s improvisational creative process, and the life-changing effects of carrying a notebook.

I am so glad to be talking to you about this album. How are you feeling about it?

It's a mixture of feelings really. There's a reason they call it a release. Feels like I'm excited for the songs to belong to other people and not just us. I always really enjoy how they become something else in other people's ears. I find that almost unburdening sometimes. I'm still quite new to this. I would be lying if I didn't say it's scary to release something like this.

Does this feel different than when you were sharing your visual art with your friends or with other people?

I guess, with this, what I do comes out of my body. You use your body to make drawings or to make artwork, but my voice comes out of inside me. In a way, making art almost feels like a way to distract people from yourself. It's like a way to talk on a wall or in a room, or it's a way to put your talking into an object or on a piece of paper. Whereas this is much more talking out of my own body. That's the main difference for me.

Were you ever curious about or interested in doing spoken word before you joined the band?

Strangely, no. I always enjoyed spoken word music, but was not a super fan or anything. When I was a kid, I used to really love that Pet Shop Boys song, “West End Girls.” Now that I do this kind of music, I suddenly remember all the different things that I really enjoyed. Things like that Noname album, Telefone, I'd just listened to on repeat for a few years.

A girl I went to college with, called Sophie Taylor, she would always write a lot of her own stories and she still does. She was someone who really inspired me on my MA, and she did the odd bit of performance. Not poetry necessarily, but narration or reading of her work, that she would often use in films. So there's a whole load of instances where I can think back to now, where it struck me as something interesting, but not intentional. It would not have happened, unless Tom asked me to be in the band.

When it comes to writing these songs, do you do the instrumentals first, and then you write to it? Or is the process more organic than that?

It is more organic than that. I think it's surprising to people, but we jam basically. We're all in a room and we play together, and some of that is totally improvised — Nick and Lewis in particular are fantastic improvisational musicians. They can just play along and be creative in the moment, which I am always really in awe of. Me and Tom, we'll mess around a lot at home. I'll be writing and he'll be writing little hooks and little bits of guitar.

We're not a band where anyone comes with a song written or even a section written. All we ever have is, I come with fragments of writing that I put together and try out together, and arrange into song lyrics in the rehearsal room. So as they're writing the song, writing the musical part of the song, it will all be at the same time.

What was the most challenging song to write?

Some come really easy. “Leafy” is one that came extremely easy. It just flopped out. And then “Strong Feelings” was quite easy, too. John added some really nice keyboard into that. Ones that were trickier... “Every Day Carry” is the last song on the album and it's our longest song by a really long way. We wrote that before we went into the studio, but it was a different song, and we're just like, "Meh." Sometimes that happens. You'll be really excited about something, and you'll go away and listen to it, and you'll be like, "Oh, I'm not feeling it."

What weren’t you feeling?

My first idea, lyrically, for it, was the idea of lines that are all three beats, three syllables or three hits. I compiled all these, lots of phrases like that all together. Then after a while, I was like, "This is too much of an idea." It was just too cute, I guess, to be like, "I'm going to do a song, and every line's got three..." It was too formulaic, and so that was my personal reason for being a bit like, "Ah, I don't know, I want to leave that to one side." But in the end, the lyrics completely changed.

Really with that song, I had lots of lyrics scattered around on pieces of paper in the studio, and I ended up just choosing what would come after what, instinctively, during the take. So that one really, for me, for that song, I did what I do in our rehearsal space, which is just to try things out as we were recording.

I love the lyric about the tree in the motorway, the one tree that didn’t get cut down. It's just so specific and able to capture a very distinct feeling of being alone.

Or like exposed, I guess. You always look at those trees, and you think like, "Wow, you used to be in a forest, and then one day we just built this thing, and you used to be hidden and surrounded by all these other trees. Now you're just, like, out there." I mean, I don't know if trees have feelings, but it's so violent.

Do you carry a notebook around with you every day? Or do you practice jotting down ideas?

I do. That's really something that actually was quite life-changing. I was advised to do that when I was at art school, but for drawing. I had this really amazing tutor who was particularly valuable to me, in that she was really keen on fostering this idea of doing a drawing every day, no matter what the quality, or no matter what the subject. She always encouraged us to carry a sketchbook around. If that means it has to be very small so it fits in your bag, then do that. It was all very pragmatic.

As soon as I really started doing that, I realized how many ideas I was previously just losing. Just because I'd think of them at an inconvenient moment, and then forget them. It became a really valuable way of just collecting things, which I really like to do, just in general. As soon as I started doing that, really the things I made exploded, and those collected things almost became the end product, rather than something that I would use to make something else.

Is there a line on the album that you're particularly proud of writing?

I think a favorite one is in “Her Hippo.” There's a line that goes, "I'm smiling constantly, and people constantly step on me." I really like it, just because of the rhythm of the line, the idea of having the word "constantly" in a line twice seems absolutely too much. But the rhythm of it makes it work. But also just the sentiment of that line. It's a sad thought, the idea of someone being stepped on, but just smiling through it, or smiling and then being stepped on. There's something just brutal about that. And sometimes things like that that also made me laugh. Maybe I'm unhinged.