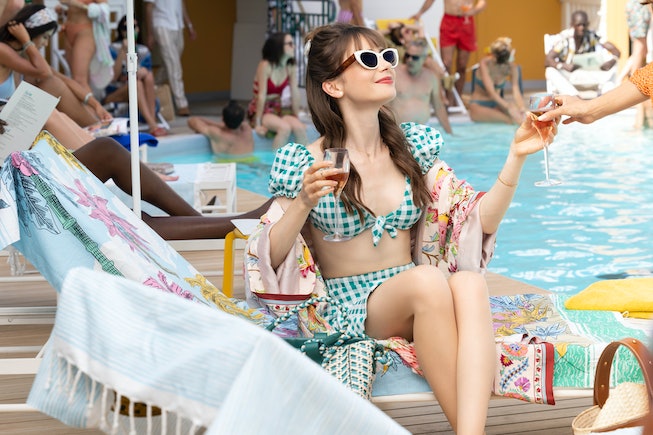 Somehow, Emily is still in Paris. The social-media manager turned Parisian socialite, will return to Netflix for another round of chaos very soon. The streamer confirmed that Season 3 of Emily in Paris is officially in the works, and the first images promise the return of your favorite characters and steamy romances.

Keep reading for everything we know about Season 3 of Emily and Paris.

The core cast will return for season 3.

The cast members from Season 2 will return for the next chapter of Emily in Paris. Lily Collins will reprise her role as Emily, while Ashley Park will continue to play her best friend Mindy Chen. Philippine Leroy-Beaulieu (Sylvie), Lucas Bravo (Gabriel), Samuel Arnold (Julien), Bruno Gouery (Luc), Camille Razat (Camille), William Abadie (Antoine Lambert), and Lucien Laviscount (Alfie) are all attached to the next season as well.

Emily’s fate will be revealed in season 3.

The last season of Emily in Paris ended on a wild cliffhanger. After Emily’s boss from Chicago, Madeline, traveled to Paris to take over Savoir Marketing, the team was entirely upended. In the episodes, final moments Sylvie, Luc, and Julien announced that they’re starting a new agency which left Emily with the biggest decision of her career thus far — stay at Savoir and keep working toward her promotion, or take a risk and join her old team on their next adventure.

The cast is currently shooting Season 3.

Most of the production details are still under wraps, but it seems like the cast is currently filming the next season. In years past Netflix has been able to crank the show out in record time, so if filming continues without delay, we could have a new season to binge as early as 2023.

The first images of Season 3 tease a romance with Alfie.

Alfie hive, rise up! The dreamy French student is back, and from the looks of things, he and Emily’s romance is moving forward. In one image we see Emily dressed up in a sparkly dress — perhaps fit for a date — while standing next to Alfie who is wearing a polished suit. Though the details of the scene are unclear, the way they are staring at each other suggests they might finally work things out.

Netflix
NEXT UP
Culture
Succession Season 4 Trailer Explodes With Family Drama
Culture
Phoebe Dynevor Will Not Return for Bridgerton Season 3
Culture
The Biggest Revelations From The Price Of Glee Docuseries
Culture
6 Shows To Binge Once You've Finished 'The White Lotus'
Style + Culture, delivered straight to your inbox.