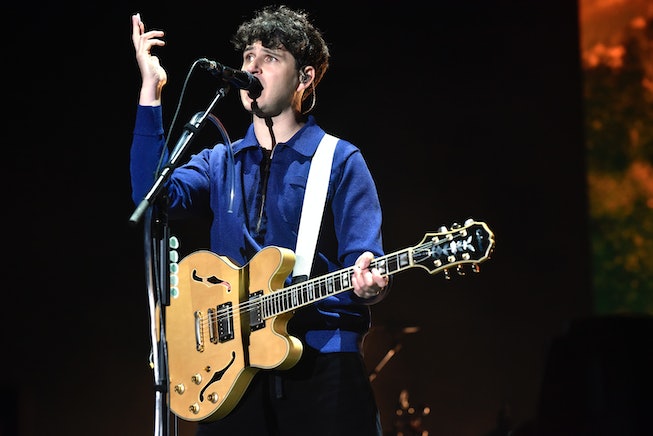 This time last year, I was spending my free time sitting in parks, sipping rosé, and listening to Vampire Weekend's fourth studio album Father of the Bride, which had just dropped. It was a different time, one where I could spend an entire day crammed inside Webster Hall listening to the band work their way through their entire discography alongside the likes of HAIM and Dev Hynes. Such simple pleasures are no longer an option these days, but at least I can still spend some time listening to live renditions of some of the band's best songs now that Vampire Weekend frontman Ezra Koenig has stopped by (or whatever it's called in the age of social distancing) The Tonight Show with Jimmy Fallon: At Home Edition to sing a medley of tracks from that excellent album.

Dressed in a black crewneck t-shirt with a fleece sweater playfully thrown over his shoulders, Koenig, set up in his home studio, sat down in front of his piano and dove into a completely angelic 3.5 minutes of pure musical bliss, playing stripped-down versions of "Flower Moon," "Stranger," and "Big Blue," all highlights from Father of the Bride.

The impressively recorded performance would have been incredible regardless, but nothing can compare to the moment that kicks in around the 55-second mark, when Koenig shows off his dexterous finger movements by launching into a very involved piano solo right as "Flower Moon" is transitioning into "Stranger." Talent is a dangerous thing for a Vampire Weekend frontman like Ezra Koenig to have...but he has it. And for that, I'm grateful.

Allow Ezra's silky-smooth vocals (and very impressive piano skills) to serenade you below.