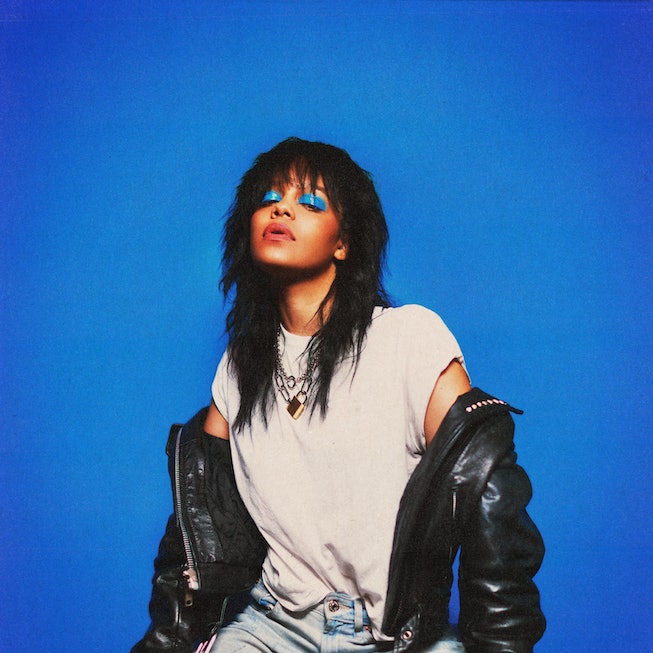 Fefe Dobson is undoubtedly an icon. Since her early-aughts breakout with bombastic singles like “Take Me Away,” “Bye Bye Boyfriend” and “Everything,” leading to her self-titled 2003 debut album, Dobson has carved her place in the pop-rock pantheon.

If you let the cruel nature of celebrity media and racist perceptions tell her story, the Canadian teen didn’t readily fit into the horde of young, emerging white artists like Avril Lavigne, Simple Plan, Good Charlotte, and others whose music videos also played nonstop on MTV. It didn’t help that she was compared negatively to her female peers, like Lavigne. Nevertheless, Dobson forged ahead, recording three albums throughout the aughts that have become influential to some of this generation's biggest artists including Willow Smith, Olivia Rodrigo, Miley Cyrus, and Selena Gomez, who've either covered Dobson’s songs or otherwise sung her praises.

Dobson defies what it means to be unsung with unforgettable, razor-sharp hooks and a true rock spirit. That’s what powers the singer’s comeback single — her first commercial release in eight years — “Fckn In Love,” a shamelessly catchy, euphoric embrace of love’s torrid lows and swooning highs. Synths pulse with energy and guitars go to 11 as Dobson surrenders to the groove when she sings on the song’s coda: “I want your babies/ I want a house/ I want forever/ I want it now!”

NYLON caught up with Dobson, who’s currently based in Nashville, ahead of the song’s release to chat about her new music, authenticity, and her advice to young singers.

How are you doing? What a ride you must be on right now.

I’m doing good! I'm in Nashville and was up early this morning doing a TV show. I love it. I mean, I'm super stoked and excited. It's been a second, so it's kind of like, excitement is like all I can feel right now. I’m also nervous, but it’s kind of the gig.

After eight years, how did you know now was the right time to step back into the spotlight?

Well, I definitely feel like the pop-rock [and] pop-punk scenes have re-emerged. It wasn't in the forefront of music for a good few years, but I felt like, since things are kind of coming back, it was time for me to step forward musically. Also, I’ve kind of lived this weird, romantic, and tragic relationship life in the last few years. And I felt like I needed to let it out and tell my side of the story. So that was very important to me.

Do you mean specifically with the music industry or in your personal life?

Oh, very much in my personal life, mostly. It’s hard to explain, but I've been just holding on to so many emotions for so many years and trying to figure out how to release them, talk about them in the best way. Music's the best way I know how, so that's why I'm doing it like this. But yeah, it was just time. I was exploding inside and needed to just release it, and this is my version of my love story. And like I said, the love and tragic elements, the tragedy and the love.

I, like many others, grew up listening to you. As a Black woman, I thought it was so cool to see a Black girl rocking out on MTV in that scene back then. To rewind, was there a moment early on when you knew you were making an impact?

When I first heard “Take Me Away” in the states, I was on a radio tour and we were in the car on the way to a radio station. And I just kind of was like, "Oh yeah, it's so cool." Like, I didn't really understand the impact. Like I didn't really get that I was actually on the radio. Like, it was just more of, "Yeah, there I am. That's so awesome, finally." I don't think I really started to feel the connection with everybody and until I was on TRL, and really being around a live audience and feeling that energy, that's what I really realized as there was something going on that was beyond what I could explain. And then when I did the Justin Timberlake tour in Europe, that was another moment for me, where it was so surreal that I started to realize that I wasn't in Kansas anymore.

Was [that success] a dream come true, or did you feel out-of-body the whole time?

It was a dream come true for sure. But a lot of moments I don't remember at the same time. You know, I was just a little Black girl from Scarborough, Ontario [with a] curly ponytail, going on TRL and just trying to be heard and be unapologetic about it. And Avril [Lavigne] and I came out around the same time and I remember seeing her and being like, "Dang, she's so pretty. How am I going to compete with that?" Which was so bizarre because I love Avril, and we're so different.

But at the same time, I felt like women were being compared to each other constantly, like, “Who wore what better,” and it's just one girl can be on top in a genre, which was so crazy to me back then. I just loved her, I loved her style. Everybody wore Dickies back then, and I remember thinking like, "Her Dickies still fit so different. Like I got hips and a booty…” I got curves, which I completely embrace now as a woman, but when you’re young, you’re just like, “What the hell?” Because you’re developing, going through growing pains, and now you’re in front of a bunch of people. Things are so different now, because we women really celebrate each other. It’s really amazing right now, in my opinion.

What’s really cool about the new song is how shamelessly pop it is, while keeping your rock roots intact. Back when you first started in the pop-rock scene, there were these discussions around artistic authenticity, aimed more negatively at women. What does that mean to you?

What is a thing that you think maybe people didn't get about Fefe Dobson when you first emerged that maybe you hope that they might understand now with this new single and all the work you have coming?

Well, when we first started, I would say that it was authentic. And I think a lot of people questioned that. "Can this black girl do rock and roll?" Which is absolutely ignorant. And me and my team would get that all the time and it was just like, "Why?" from certain people and it was just weird to me. But I would say now like, I just want people to hear my story. This might sound emo but I am a Pisces, so I definitely wear my heart on my sleeve.

You’ve been influential to singers like Willow Smith and the spirit of your sound is definitely heard in new music by people like Olivia Rodrigo, Miley Cyrus, and others. You walked so they could run! What would you say to young singers who see themselves in you?

I'm definitely starting to realize that more than ever and it feels good. It feels really meaningful and really inspiring. It inspires me to do what I do. To know that I'm helping others or inspiring others or encouraging them is very important to me. And then, if I was talking to someone else I would say, "Don't don't be too hard on yourself, and remember to have fun with this and that there's a place for you to be yourself.” Kick the doors down.