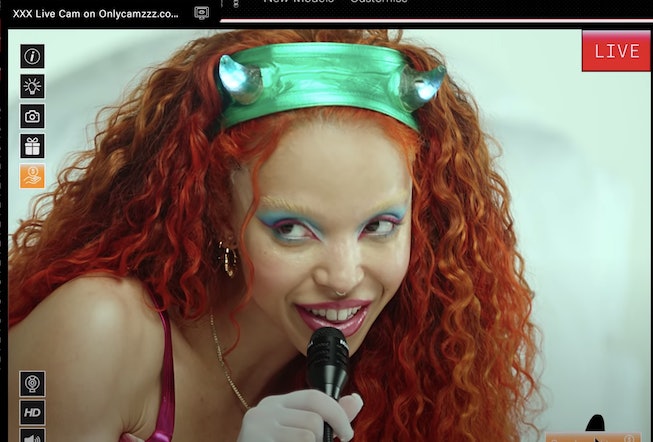 Atlanta-based rapper 645AR’s squeaky rap anthem "Sum Bout U" has only just come out and is already making waves — much in thanks to its accompanying video featuring FKA Twigs. Appearing as a cam girl, the London-based artist joins 645AR, who can be seen browsing a website called "OnlyCamzzz," (spoiler), inspired by OnlyFans, which is where he finds Twigs’ stream.

Produced by SenseiATL, the video was reportedly conceived by Twigs herself, and debuted on the same day her fundraising initiative that lends direct financial support to sex workers by donating £10,000 ($13,065).To further shed light to the cause, she also shared on Instagram personal anecdote working as a young hostess in a gentleman’s club in London.

“I was 19 when i learnt my first pole move, I learnt a back hook spin from a stripper when I was working as a hostess in a gentleman’s club,” she wrote. “For those of you who don’t know, hostessing is when one person pays another person for their time, anything from a conversation over dinner to sex work, and the club gets a cut of the fee. My lived experience as a very young woman in these environments has not only informed the strong and formidable woman that I am today, but also a lot of my work as a music and visual artist - sometimes even subconsciously.”

Citing how COVID-19 has impacted the lives of several sex workers she continued: “I feel like now is the time for me to step forward, pay respect, and shine a light on the challenges facing sex workers, especially during these uncertain times. sex workers I know and have met have discipline, craft, talent and work ethic - not only do they deserve better long-term, but their income has been wiped out by the lockdown and many are invisible to the financial aid available to others. There’s a bigger journey in challenging public attitudes, tackling stigma, and fighting for rights and protections.”

To donate, all you need to is go to the GoFundMe page and pledge the amount. All cash donations are meant to benefit organizations such as SWARM, Lysistrata and ELSC, that provide direct monetary support to strippers and sex workers.

NEXT UP
Culture
Senators Quoted Taylor Swift During Ticketmaster’s Hearing
Beauty
12 Lunar New Year Beauty Releases To Ring In The Year Of The Rabbit
Entertainment
Emma Chamberlain Is Officially Moving to Spotify On February 23 (Exclusive)
culture
Anna Delvey Is Getting A Reality TV Show
Style + Culture, delivered straight to your inbox.