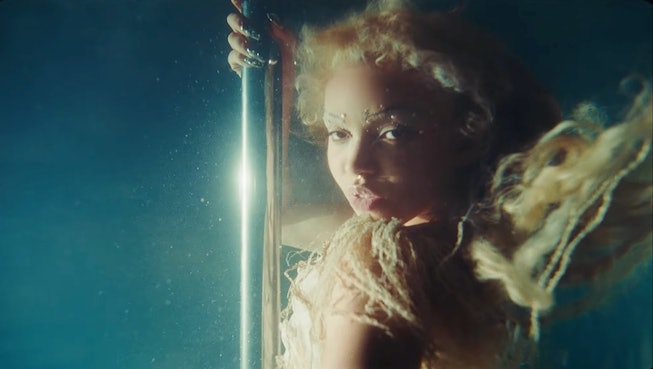 Like every great Capricorn, FKA twigs is all about pushing herself and her art to the extreme. From taking up pole dancing just to execute a music video concept, to incorporating martial arts sword training in her art, it’s clear the British avant-pop star is not one to rest on her laurels. She’s constantly honing her craft — not only raising the bar for herself, but for everyone else, too.

Now, it appears twigs has undergone yet another artistic metamorphosis. She’s announced a new era and mixtape set to arrive at the top of 2022: Caprisongs, a project that she’s teased will give “what u’ve been wanting from me for bare time,” she wrote on Instagram.

Its lead single, “Tears In The Club” featuring The Weeknd, is already out and shows that while sonically she may be moving into a more mainstream, pop-trap direction, her experimental tendencies haven’t been abandoned, they’ve just evolved.

“I’m always pushing to level up to MY best self,” twigs wrote of the mixtape and new single in a press release. “And I’ve pushed so hard to find my capri sun. I’m so proud of this music.”

The mixtape will be her first major release since 2019’s critically acclaimed Magdalene. In 2020, she filed a lawsuit against actor and ex-boyfriend Shia LaBeouf for “relentless abuse,” including allegedly knowingly giving her a sexually transmitted disease, sexual battery, assault, and infliction of emotional distress. “I’d like to be able to raise awareness on the tactics that abusers use to control you and take away your agency,” she told the New York Times at the time as reasoning for the lawsuit. (LaBeouf, through his lawyer, denied the allegations.)

Read on for everything we know about twigs’ Caprisongs so far.

The mixtape is called Caprisongs

On Jan. 6, FKA twigs confirmed that the mixtape will be titled Caprisongs, a name that seems to reference more her astrological sun sign, Capricorn, than the popular pouch drink.

CAPRISONGS… it’s bronzer in the sink, alco pop on the side, a cherry lolly, apple juice when you’re thirsty, friends in the park, your favourite person, that one sentence somebody said to you that changed everything, a club pre-game, your bestie who is always late but brings the most to the party, meeting a friend at the airport, just togetherness. And my world: London, Hackney, Los Angeles, New York City and Jamaica.

It’s my stubborn Caprisun ass telling me to work thru my pain by delivering at work, don’t think just go studio and create. My Sagi moon being the enigmatic temptress craving the club, to dance and to be social and my Pisces/Venus hot mess disastrous heart falling in love all over again. But this time with music and with myself.

Notably, the record’s release date also coincides with the end of Capricorn season on January 19, as well as twigs’ own birthday on January 16.

Caprisongs’ tracklist has a ton of features

Lead Single “Tears In The Club” Is Out Now

In conjunction with the mixtape announcement, twigs released its lead single, “Tears In The Club” featuring The Weeknd. The dark dance track is the first taste of her forthcoming project, which seems to find the musician venturing into more mainstream pop territory.

Over a trap beat, she sings about taking back ownership over her body, seemingly suggesting that the track was written in the aftermath of her relationship with LaBeouf. “I wanna get you out of my hips, my thighs, my hair, my eyes, my late-night cries/ I wanna take my clothes off, wanna touch my hips, my thighs, my hair, not yours, all mine,” she whispers in its opening lines.

In its accompanying music video directed by Amber Grace Johnson, twigs dances in a crowded club and delivers another breathtaking pole routine — this time while completely encased in a water-filled tank as The Weeknd watches on. As twigs herself said: she’s ascended to a new level completely.

This article was originally published on Dec. 17, 2021