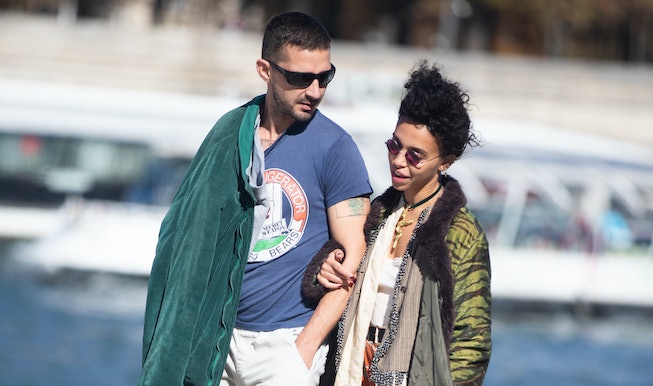 FKA Twigs has accused ex-boyfriend Shia LaBeouf of a "relentlessly" abusive relationship, a new lawsuit alleges. The couple dated from 2018-2019, with Twigs being the first woman LaBeouf was linked to after his divorce from Mia Goth, who he was married to from 2016-2018.

According to the New York Times, Twigs' lawsuit against LaBeouf describes one particularly bad trip together in the desert, that included LaBeouf waking her up in the middle of the night, choking her. As they drove back from the trip to Los Angeles, LaBeouf allegedly assaulted Twigs at a gas station and threatened to crash their car if she didn't profess her love for him.

Twigs said she wanted to come forward to show that abuse can happen to anyone, even a celebrity with a strong support network. “I’d like to be able to raise awareness on the tactics that abusers use to control you and take away your agency,” she told the NYT.

In an email to the NYT, LaBeouf said he had no excuse for his behavior, and that he's been abusive to himself and those around him for years. “I’m not in any position to tell anyone how my behavior made them feel,” he wrote. “I have no excuses for my alcoholism or aggression, only rationalizations. I have been abusive to myself and everyone around me for years. I have a history of hurting the people closest to me. I’m ashamed of that history and am sorry to those I hurt. There is nothing else I can really say.”

Another of LaBeouf's exes, stylist Karolyn Pho, is also named in the suit, where she describes similarly violent incidents with LaBeouf. “So much goes into breaking down a man or woman to make them OK with a certain kind of treatment,” she told the NYT.

The lawsuit alleges that LaBeouf knowingly gave Twigs a sexually transmitted disease, in addition to "relentless abuse," including sexual battery, assault and infliction of emotional distress. She describes her attempts to leave him, which proved to be far more difficult than she thought.

“It was actually very expensive, and a massive undertaking of time and resources, to get out,” she told the NYT, explaining why she plans to donate a significant portion of any money received to domestic violence organizations.

“What I went through with Shia was the worst thing I’ve ever been through in the whole of my life,” she said. “I don’t think people would ever think that it would happen to me. But I think that’s the thing. It can happen to anybody.”