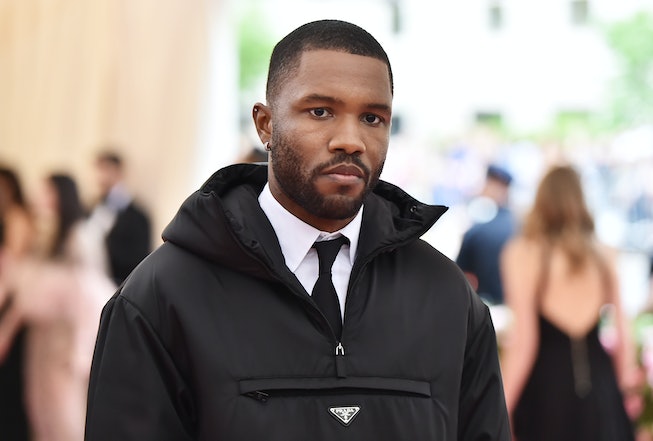 Frank Ocean is back — not with new music (yet), but with a new Apple Music 1 radio show. Homer Radio takes place on Thursdays at 10pm EST. The first episode is live and features producer Crystallmess.

Ocean, who fans have been flat out begging for new music since his last full length album, 2016’s Blonde, last released two episodes of his Blonded Radio back in July. Before that, he shared a Blonded Xmas episode in late 2021, but otherwise, he’s been pretty quiet.

Homer is Ocean’s luxury brand, that includes a $25,570 diamond-encrusted cock ring. A description accompanying the Homer Radio broadcast describes it as “a one hour window into what plays around our office after hours.” The statement, signed by Ocean, says:

Twin line array speakers hold court, they’re only a little loud. Someone’s vacuuming the carpets in another room adding white noise to the song. A security guard coming back up from a cigarette break can hear it all from inside the elevator. Magnified eyes see through a headset loaded with grids of light and lenses and loupes. Skulls on swivels make no sudden movements helicoptering over paperwork, pens, blades, vices, metals and gems. Artificial light pours from small canisters like those dragons that spring from cylinders, like the never-ending ribbons pulled from a magicians ear. Media fires back and forth and back again across the net. Sorkin-like walk and talks travel down the hallways further and further from the sound. This is Homer Radio. An office soundtrack. Can’t you hear our “voice”? It’s not a dead line.

Since Blonde, Ocean has released songs including “Dear April,” “Cayendo,” “In My Room” and “DHL.” In August of last year, it was announced he’d be headlining Coachella in 2023.

You can listen to Homer Radio on Apple Music.