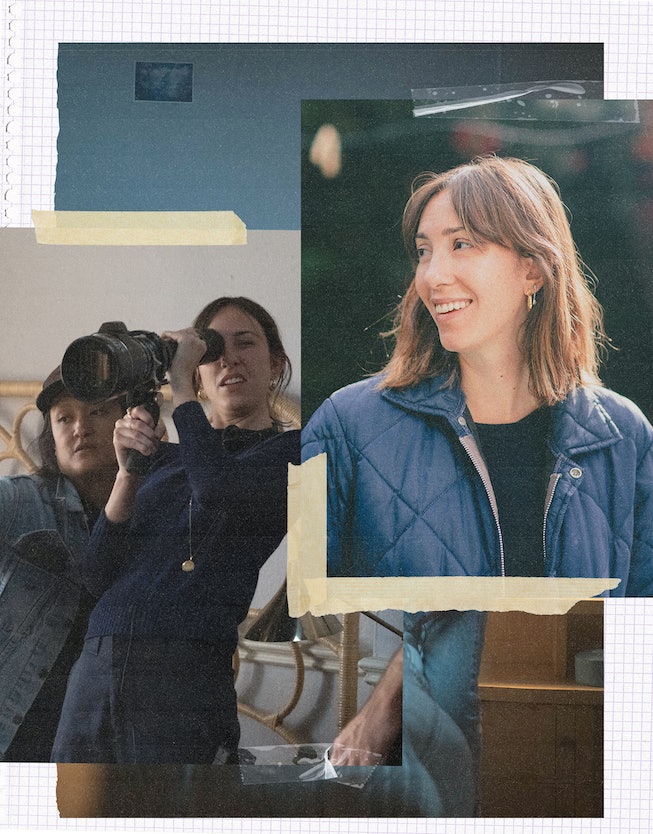 Nothing strains the psyche and warps reality quite like being perennially logged online. There’s a reason people write dissertation-length Instagram captions about taking a social media hiatus, only to pop back up on the feed roughly 12 hours later. As addictions are famously wont to do, at some point there’s going to be a spiral. It’s old news. We’ve been living in this screen-driven hell on Earth for years now, to the point that the phenomenon has made its way to film immortalization. Enter Mainstream, Gia Coppola’s sophomore feature and satirical exploration meets cautionary tale of the darkness that lurks beneath viral fame.

Written by Coppola and Tom Stuart, Mainstream stars Maya Hawke as Frankie, a struggling artist working a dead-end bartending gig at a cabaret bar, who becomes captivated by Andrew Garfield’s reckless live-wire, Link. He’s different from everyone else, prophetic almost. Link is in the midst of a frenetic rant about the perils of consumerism when Frankie first spots him. Enchanted by his zest and freedom, she records the performance, and the uploaded video goes micro-viral on YouTube. Frankie hunts him down, and begs to collaborate with him. Viewers are responding to Link’s candor — together they could be onto something big, she thinks. Link doesn’t understand why. He doesn't even own a cellphone. “I’m no one special,” he insists.

His resistance is futile, of course. Almost overnight, Link is transformed into a viral star, who goes by the moniker “No One Special.” He’s immediately seduced by his new found power — let’s be real, anyone who’s ever had a selfie pop off or a tweet blow up can confirm that it’s nothing less than intoxicating. Jason Schwartzman shines as the group’s eventual sleaze ball manager who takes Link, Frankie, and her besotted co-worker-turned-sketch-writer Jake (Nat Wolff) to a new level of celebrity. With his brain fully rewired, his serotonin receptors pulsing, and viewer retention dominating his life, Link will do anything to keep his followers engaged, even if it means going full scorched earth on his seemingly staunch values.

Mainstream unfortunately never packs the punch it thinks it does. It doesn’t have the horsepower to compete with its truly manic contemporaries on viral fame, like Eugene Kotlyarenko’s twisted thriller, Spree. Although Coppola’s fascination with YouTubers like PewDiePie may have led her on the road toward Mainstream, the viral social media references she chooses feel dated — the script may as well have thrown in a “Do it for the Vine!” moment for how far away it felt — but the message remains clear: the pursuit of fame is a sickness.

The following contains spoilers for Mainstream.

I don't actually. For this process, I was diving into that world and trying to understand it. But it really was stemming from my curiosity of what people find so engaging about it, I guess.

Who were you looking at for reference?

I've been kind of tracking it for a while. It kind of started with the PewDiePie world of it all, and I was really baffled. I just really couldn't wrap my head around it. He's just playing video games, why is it interesting to just watch him for hours on end? His sort of personality was really bizarre. Then just kind of in the audition process, I was getting to know more of them, and kind of understanding their experience, and their side of things. Things that my cousins were watching and into, so there aren’t really too many specifics, but it was kind of the content of it all.

The whole Twitch streaming world is also so bizarre. I still don’t understand how these people are making a livelihood from people watching them gaming.

And there's so many other unique ones, of course. Opening up a box is really fascinating. My cousin loves looking at people's pantries for 20 minutes and I'm like, "You're 14, what do you love about a pantry?" [Younger generations] don’t care for TV or movies as their platform.

What was the driving inspiration behind this film?

My friend was working with one of the YouTubers way back in the day and it stemmed from my fascination with it. I really don't understand what you do, and her kind of explaining what these people have such a massive following, but we just don't realize it because it's not really part of our world. But they're bigger than the sort of mainstream world that we know, and that kind of spiraled from there.

I also had stumbled on the movie A Face in the Crowd and I just felt it was chasing similar themes. Of course, it was dealing with radio shifting into television, but it was kind of all told in this sort of lens of a love story. I thought it was really beautiful, and even though it was a satire of the 1950s, it still felt really relevant today. I think I was just sort of in this space where I was really interested in what celebrity means, and why do we follow that? Certain characters like Andy Kaufman or Elvis. I was enjoying those kinds of stories of what it was like for those characters, and why we worship them.

An aspect that I particularly enjoyed was Devonté Hynes' score. How did you articulate what you wanted from him?

I'm such a fan of Dev and I feel like he can do no wrong. He had asked me how I felt about the project tonally, and how I see the progression of it. I also just really loved Tangerine Dream, and I had sent him this album that was a little more rare that I was into. I really want him to just run off and do what he thinks is best, and I always love it.

Do you consider yourself a super logged-on person?

I think, as I was making this film and before, social media was really kind of bubbling and I was recognizing how it was making me feel, and kind of watching the pros and cons that are coming out of it. In a way, I was trying to kind of understand my own way of navigating it through making this. Now that I've done that, I feel a release. I don't have the same kind of, I guess, tether to it or anxiety with it that I feel used to come with it for a lot of people.

What were you anxious about?

I think it breeds compare and despair. It's just the nature of the way it's designed. It's designed to keep you on it. So much of our society is designed to make sure that you feel inadequate, so that you want more, and you spend more. How do you kind of remain authentic to yourself? It was also partly how do you fit in in a world where I feel like I just don't understand what everyone's liking? Where does creativity lie in that space now that if you take a photo of something more abstract it doesn't get as much attention as if you're someone naked? But not to say that you need attention, it was just an interesting way to see how it affects you emotionally.

How do you stay creative and stay authentic to yourself in these kinds of spaces?

If you can connect to one person, I think that's really all that matters. If you can follow what is unique to you, and what feels like your story, and things that feel creative and inspiring to you, and following your gut, and trusting your gut. Those are the moments that you can gain so much about yourself, and I think when you learn, and expand, and challenge yourself, that's when life feels worthwhile.

After watching Link's descent over the course of the film, do you think that fame and fortune are inherently corrupting forces?

It kind of seems like that, it seems like it's very hard to remain pure and authentic when you have a lot of things that are just in your face, telling you how great you are. It's a very hard thing, I would imagine, to navigate or make sure that you stay grounded. I think what's so interesting about social media is that now it's kind of affecting everyone, and it's so constant. Link is this character that is sort of denouncing all of those things, but then he becomes victim to it and in a much bigger way. But I think it happens on a daily basis, it's the serotonin that hits you when someone says they like you.

He loses himself rather quickly, too. Because he comes across as someone who very much knows who he is and what he's about, and then the switch quickly flips.

I think with someone like Link, it was all sort of a facade before, and he always had that deep within him, and that it just released the beast.

Aside from being the director of this film, just as a person, do you think Link is responsible for Isabelle’s suicide?

I think what he did was selfish, but it was also a product of the collective that was what kicked it over the edge. I think what's so dangerous about the internet, and seeing it with young people who are still trying to form their identity, is that it’s not like a normal high school situation anymore where you're just walking down the halls and then someone makes fun of you. Now, the whole world can say something about you. It’s fragile, but it's amazing how that sort of stuff can happen. That was sort of understanding the worst case scenario of what this sort of space can do.