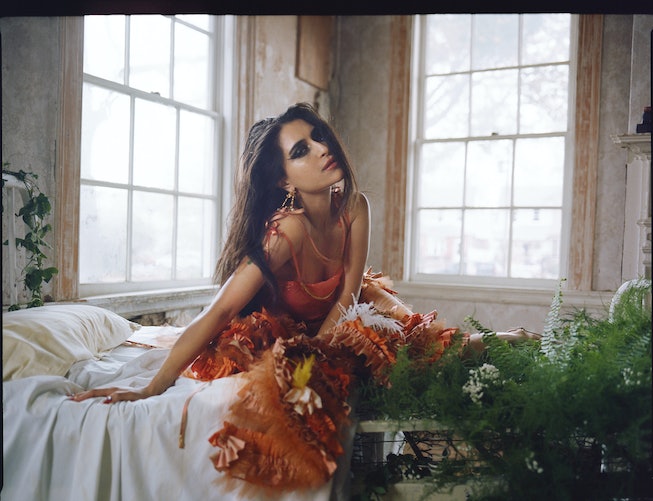 Queer Persian pop singer Gia Woods may only be 23-years-old, but she's seen enough growing up in celebrity-centered Los Angeles to know that glamorous things aren't always as they seem. In the video for "Naive," the third single off her first EP, CUT SEASON, the singer explores a dark take on Marilyn Monroe's iconic "Diamonds Are A Girl's Best Friend" performance, flipping Monroe's eerie world of pink evening gloves and the male gaze on its head.

"This song came to me at a very dark time," Woods tells NYLON. "I was going through an intense break up that left me feeling empty and almost without an identity. Spending four years of your life and waking up with them every single day, and then suddenly losing them is an intense scary feeling. I felt really lost. Writing this song was what finally helped me start to feel like myself again. A lot of my anxiety went away right after I wrote it and it helped me start writing my whole EP."

Like "Ego," Woods' second single that focused on how the need for control can poison a relationship, "Naive" deals with the kind of relationship dynamics that would make anyone question their sanity.

"I’ve been in two long-term relationships and when they ended, both of my ex girlfriends told me I never seemed to take the relationship seriously. It was crazy to hear, considering how invested I was in these relationships but also aware of how young we were," Woods says. "For me personally, I don’t have this 'ideal' fantasized relationship. That’s not me. I prefer things that are imperfect. I think that’s how you grow within any relationship. So this song is kind of saying to live in the moment. You’re only young once and your parents and everyone who is older and wiser says it for a reason: you can’t get those years back. Don’t be naive."

Watch the video for "Naive," premiering exclusively on NYLON below: