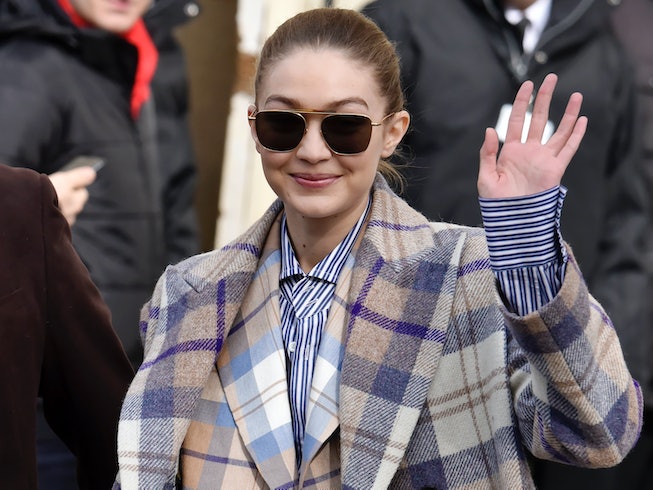 The rumor mill dropped a big one this week: Supermodel Gigi Hadid was allegedly expecting her first child with on again, off again boyfriend, Zayn Malik. TMZ reported that Hadid was 20 weeks into her pregnancy and expecting a girl, but neither would-be parent was quick to address the rumor. It took approximately one news cycle until eagle-eyed fans sleuthed out clues indicating that Hadid's 25th birthday party actually doubled as an intimate gender reveal party. Now, Hadid herself is speaking up and confirming that what we're hearing is true: she's pregnant with what will probably be the world's most beautiful child.

"Obviously, you know, we wish we could’ve announced it on our own terms, but we’re very excited and happy and grateful for everyone’s well wishes and support," she told Jimmy Fallon during her Tonight Show interview. "I’m trying [to be present for every part of it]," she continued. "Especially during this time, it’s a nice silver lining to be able to be home and together and really experience it."

Hadid and Malik are riding out quarantine on the Hadid's idyllic Pennsylvania farm, along with fellow supermodel and sister, Bella Hadid, and Hadid matriarch Yolanda. Prior to Hadid's Tonight Show interview, Yolanda confirmed the pregnancy to a Dutch outlet on Wednesday, letting it slip that she was “excited to become a Oma in September.”

Hadid and Malik got back together toward the end of 2019. According to Entertainment Tonight, "it was like they never skipped a beat and knew what they had was special.”

NEXT UP
Entertainment
Taylor Swift Swept The 2022 American Music Awards
It Girl
Jessica Henwick Is A Franchise Favorite For A Reason
Entertainment
RM's "Yun" & 9 Other New Songs Out This Week
Entertainment
Caroline Polachek Announces Album ‘Desire, I Want To Turn Into You’