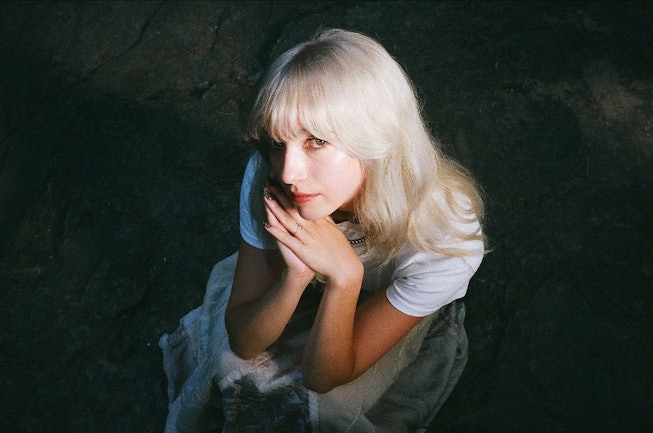 The last two years forced a lot of people into unplanned career pivots — and for Becca Harvey, it put her on the path to being one of indie folk’s most promising newcomers. Harvey had been writing music privately for years, but after departing a bakery job in her hometown of Atlanta, GA, she turned her attention to a musical project called Girlpuppy. Her earnest, quick-witted single “For You” quickly caught thousands of ears.

Now, she’s got a record deal, marquee collaborators in Phoebe Bridgers drummer Marshall Vore and Alex G guitarist Sam Acchione, and a growing discography of songs that touch on everything from young love to the freedom of hitting the road to QAnon.

Last August, Harvey released Swan, a tender, breakup-inspired EP that highlighted her knack for lyrical scene-setting and gossamer melodies that seem to hang in the air like the scent of a freshly baked fruit pie. And though her music thus far bears some similarities to Bridgers’ early work, it also feels like she could make the same tremendous artistic leap the latter did with Punisher before too long.

Here, we speak to Harvey, 22, about Atlanta’s burgeoning folk scene, being indie music’s most exciting young Swiftie, and working on her forthcoming debut album.

Your career took off quickly, and because of that you avoided some of the hurdles that come with playing open mics and very small shows. I’m sure a lot of people would say, “Oh, I wish I could have the path that Becca is on,” but I imagine that has its own challenges.

You’ve experienced a lot of it virtually. Was there a specific moment where your artistic career felt very tangibly real?

It was the EP release show. It was my first show ever, period. I had never played to people before. Even recording was just like, “Oh, this is cool. I’m making music.” But it was so chill and laid back that it didn’t really feel like I was doing something so amazing.

Playing the show was crazy. I was so nervous. All my friends and family came and then after that show we played [a music festival] like the month after. That was also one of those moments where it was like “Woah, I’m really doing it now.”

You’d been writing music for a long time in various forms, but had you not really taken recording seriously until you left the bakery job?

The problem is that I don’t play any instruments, so recording music isn’t [easy], unless I want to go the Grimes route and go heavy on Garageband. In high school, I would play whatever would sound good on my brother’s guitar and sing over that. I would record that on Garageband and add harmonies. I’d put that sh*t on Soundcloud just for fun. That was as far as recording went for me. I didn’t know what recording really was until I met my boyfriend and did my first song ever, “For You.”

Recording music didn’t seem very plausible, so I guess I didn’t really take it seriously. I thought, “This can’t really happen for me if I can only sing and write. I’m not gonna be an a cappella artist.”

Is all the music you’ve released as Girlpuppy brand new or did any of it come from older ideas that you revised and repurposed?

“For You,” the very first song, was a fresh, wrote-it-all-in-one-night type of thing. But when it came time to make the EP, it was a lot of recycled lyrics that I had written in high school or written in my notes from before I even started making music. Like, “Oh, if I ever write a song, maybe I can use this lyric.” The way that I write songs is whenever I think of a good lyric that I want to write a song about I’ll throw it in my notes and then look at it later when I have a melody. That’s what it was like with the EP. “Oh this is an idea that I came up with two years ago. I wonder if it would sound good in this song?”

Nearly all of your previous interviews have involved a question about Taylor Swift. Lots of people love Taylor Swift, but it seems you’ve gained a bit of a reputation as the new indie singer-songwriter who’s really into Taylor. Do you know how that happened?

I don’t know! I remember when I made “Cheerleader,” Marshall Vore, who produced it, was like, “We should get you PR for this.” They have to do a writeup for your Spotify bio and Marshall was like, “You should mention what got you into music to begin with.” And I was like, “Oh, well when I was little, I really wanted to be like Hannah Montana and Taylor Swift. Those were the two people that I wanted to be.” And he said, “Oh, Taylor Swift. Just put something in there about that.”

So in my Spotify bio for the longest time, until my EP came out, it was like, “Growing up wanting to be Taylor Swift or Hannah Montana…” so all of the earlier interviews I did would mention Taylor and then whenever anyone would ask me in interviews who was my inspiration, I’ve always said Taylor because it’s true. So now, Taylor just keeps getting brought up. Everything I do, she gets brought up. I love her, I will take any opportunity to talk about her. I do think it’s very funny that it's a part of my reputation. I actually love that and I hope that continues.

That would be a trickier position to be in.

How did you and Marshall start working together?

Literally on Twitter. We followed each other and we would DM sometimes as friends, very casually. Respond to each other’s tweets because we liked all the same music and stuff. And then after “For You” was made, Marshall offered to produce for me, so we made “Cheerleader” completely over voice memos and then I went to a studio to record the vocals. After “Cheerleader” was made, he was like, “Just come out to L.A. We can make the whole EP.” Very casual.

So much of Swan was inspired by a breakup you went through. Did you find you had done the brunt of the processing before you started writing or that making these songs helped you work through things?

I was going through it as I was writing it. We wrote “Cheerleader” the week after I got broken up with, so it was all happening at the same time. It’s nice to do that, because it’s all the things I couldn’t say. It’s hard for me now, but it’s so funny, because me and my boyfriend broke up and I went to L.A. to write a few songs and then we got back together. Some of the songs on the EP were written as we got back together, but it was still the heartbreak and hurt of the summer that I could write about. Now, since I’ve been writing the album, I’ve tried to look back on that summer and the things that I wrote Swan about and what hurt me. I am not a person who’s like “OK, it happened. I’m over it. Now I can write about it.” I have to write more in the present.

Songs on the EP like “Miniature Furniture” and “Surprise Me” have recurring motifs around driving and travel. Are you the kind of person who finds being on the move comforting?

Absolutely. It’s also harder for me to write songs in my own city. It’s so much harder for me to make music at all in Atlanta, in Georgia. I have to travel, not to feel anything, but it’s a very stimulating thing for me to do. Just driving around my city, even. I used to drive to very nice, expensive neighborhoods around my very not-nice, not-expensive neighborhood and just walk around. That was such a nice thing to do instead of being stuck in my house. It is very hard for me to be in one place all the time. I love to travel, I love to drive. I love to walk around. It is the most stimulating thing for my brain, really.

I wanted to talk a little bit about some of the specific tracks on Swan. “Hideout” really stuck out because it has a strong sense of place, which is a difficult thing to achieve. In that moment, on that drive to Florida that you sang about, was that one of those things where you felt in the moment “This could be a song?”

It definitely dawned on me later on. That song was written entirely after a breakup, which is, I guess, very clear on the song. So, with that song especially, it was just dawning on everything in the relationship and, for whatever reason, that stuck out. Navarre is such a funny city name. It was just such a silly thing to sing about. I like to get very specific in my songs and name very specific things and Navarre stuck out as a specific place.

I think that gives the song a tangibility. It feels real. Sometimes people make songs that are very general, and that can be pretty good, but a lot of times there isn’t much to latch onto.

NEXT UP
Entertainment
Harry Styles' Harry's House Has Scatting, Cocaine & His Best Songwriting Yet
Entertainment
Seventeen On Face The Sun & The Start Of A New Era
Entertainment
Olivia Rodrigo Spoke Out For Stricter Gun Laws Following Texas Shooting
Entertainment
Momma Is Indie Rock's Next Big Thing