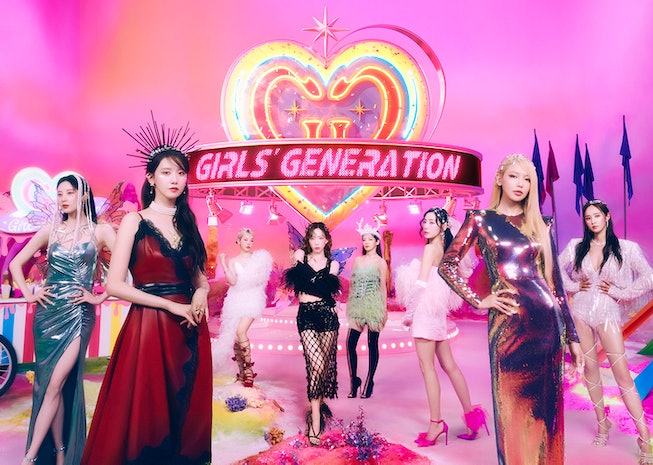 The first K-pop song I ever loved was Girls’ Generation’s 2009 hit “Gee.” At the time, the fresh-faced girl group was still fairly new to the scene, having debuted in 2007, but “Gee” changed the trajectory of their careers. Today, the 8-member group is better regarded as K-pop royalty — veteran superstars responsible for hits after hits — a title that still stands now as the group officially returns with their seventh studio album, Forever 1, their first package of music together as a group since 2017. For many Sones — the name of their fans — its release is a moment that’s been long-awaited, but not without a slight curiosity to see how the group now fares in the current, cultural K-pop context. Luckily, based off what I can hear from the project’s title track “Forever 1,” the girls sound great and as energized as ever.

Though Forever 1 is their comeback album as a group, Girls’ Generation first reunited in September 2021 when they made their first public appearance together in four years on a South Korean variety show. Earlier in May, the group’s label, SM Entertainment, announced that the girls would officially be coming back to coincide with the group’s 15 year anniversary of the release of their debut single, “Into The New World.” However you cut that, 15 years is a long time for groups in general, but especially so for K-pop groups, many of whom generally don’t make it past the seven year mark (the seven year curse, as its known in K-pop fandom). That feat is what partially makes “Forever 1” impressive in and of itself as all of the members sound like not a day has passed — though time has clearly passed.

Online, fans point have pointed out that the title track’s music video is all about showcasing the girls in their flourishing solo careers, and still reuniting for their group activities. It features scenes of what each member has been doing to keep themselves busy during the hiatus: for Tiffany, that’s been jet-setting across the globe; Hyoyeon, DJing; and Yoona and others, embarking into their acting careers. It’s a warm and reassuring message to send to fans for any girl or boy group but seems to ring especially authentic and true coming from Girls’ Generation. When they sing, “We’re forever,” over the song’s sparkly hook, you genuinely believe it.

Forever 1 the album, on the other hand, appears to be simultaneously an expansion of the Girls’ Generation journey and retrospective look back at their legacy. The project includes tracks written by some of the members themselves, notably the lounge-y R&B track “Seventeen” which credits Tiffany and Sooyoung as songwriters, but also callbacks to their previous hits. “You Better Run,” glitchy and electronic, seems like a natural continuation of Girls’ Generation’s 2010 hit “Run Devil Run.” Elsewhere, the project’s songs tap right into the sugary center of the group’s signature brand of pop, bringing the charm that made the group so great in the 2010s into the 2020s.

2021 alone has been a big year for K-pop reunions, from 2NE1’s return at Coachella to Girls’ Generations’ long-awaited return. From where we’re standing, it can only go up from here for the world’s girl groups.

Girls’ Generation’s Forever 1 is out now.