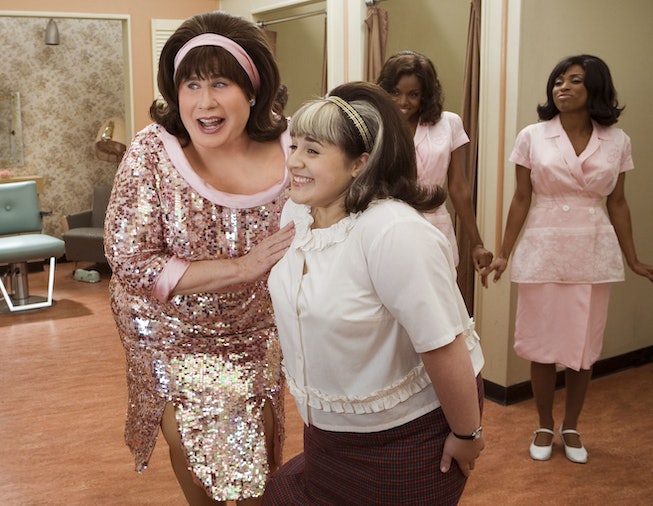 A girl I dated in high school introduced me to the remake of the Hairspray movie when it came out in 2017. We got a smorgasbord of fast food–chicken nuggets and pizza and milkshakes and curly fries–and embarked on my first watch. She did that thing where she watched me watch the movie, waiting for my reaction. I liked the movie, but it made me uncomfortable for reasons I couldn’t fully verbalize. Growing up in rural East Tennessee, I had made a point to try not to be an other, and this was a whole movie celebrating being an outsider: in body size and race and, by way of the genderfucked perfection of Edna Turnblad, queerness.

I came out to that same girlfriend in college three years later. Turns out, that was also something we had in common. About six years later, she came out to me, too. And although Hairspray doesn’t have a single LGBTQ character, there is something undeniably queer about it. For two teenagers growing up in the South, it marked a moment for both of us where we felt uncomfortably welcomed, even if we weren’t ready to talk about why. Fifteen years after its release, 2007’s Hairspray has ended up being this peculiar 21st century version of queerness.

Set in Baltimore, the 2007 remake is the follow up to the John Waters original released in 1988, starring Ricki Lake, Divine, Sonny Bono, Debbie Harry, and Waters, himself — the proverbial five people you meet in gay heaven. The film follows Tracy Turnblad: full-figured Baltimore teen of 1962, preoccupied with The Corny Collins Show, dancing, and of course, racial integration.

Tracy doesn’t adhere to the rules when it comes to social norms, nor does she understand why those rules were put in place to begin with. Let a big girl dance! Don’t restrict Black dancers to one specific day! The film was eventually adapted into a musical, which served as the basis of the 2007 film, but by the time the material was optioned for a film remake, a good part of the campiness and grit that defined the original had been stripped away.

The heroes are different and misunderstood, but they’re heroes all the same. If that’s not a gay mantra, I don’t know what is.

Still, the bones of Hairspray remained. Tracy’s mother Edna was played by John Travolta in drag. The story remained focused on the ostracism Tracy faced for her size, paralleled by the civil rights battle happening in 1962 Baltimore. The core message (broadcast in… Cinemascope!) is ultimately that being different isn’t just fine — it’s the future, baby. The heroes are different and misunderstood, but they’re heroes all the same. If that’s not a gay mantra, I don’t know what is.

At the forefront of the new version is Nikki Blonsky, an unknown actress who auditioned for the role before she’d even graduated high school. After the film wrapped, Blonsky was primed to be an overnight star, but the star-turn never happened. Within six years, the well of roles had seemingly run dry. Blonsky became a bit of a meme, tweeting at celebrities, “Hi (insert name), it’s Nikki Blonsky from the movie Hairspray,” typically to no response.

She was adopted by the queer community as a bizarre, if not sometimes cringeworthy, icon. She encapsulated what it’s like to be an “other,” unapologetically embarking on a public search to find where her tribe was. And then in 2020, she came out herself, identifying as a lesbian, as if it were willed that she join the queer fold. And that’s just Blonsky’s story. The cast, rounded out by the likes of Travolta and Amanda Bynes and Queen Latifah, is a veritable who’s who of Hollywood’s oft-misunderstood and misconstrued. Hairspray’s legacy has followed suit, becoming one of those pieces of culture that exists outside its own confines.

Watching the film back in 2022, with the current political climate in mind, Hairspray feels like a time capsule that (unfortunately) never loses relevance. Forty-ish years after the original film debuted, we’re still fumbling with the same themes and issues that Hairspray tackles. I mean, the Supreme Court is out here treating the Constitution like a Rubix Cube, rearranging precedents in a way that could threaten Obergefell and Loving rulings that affirmed the right to marry whomever you want, regardless of gender or race, respectively. It’s a timeless story, in the worst way.

But what I like to focus on fifteen years after my first viewing is that there’s something inspirational about what Hairspray has offered since its first iteration in 1988. John Waters’ original movie is queer in all the ways we’ve become accustomed to using the word: campy and subversive. But the Nikki Blonsky version is queer by the most stripped back definition; it’s about being out of the ordinary and what it means to exist among other people who don’t value what makes you different. And back in 2007, as a “straight” teenager whose greatest fear was being found out as “different,” it was oddly nice to be uncomfortable. To know that in this other universe (and maybe somewhere within my own) that me and everyone else in the world could also be celebrated for exactly who we were.