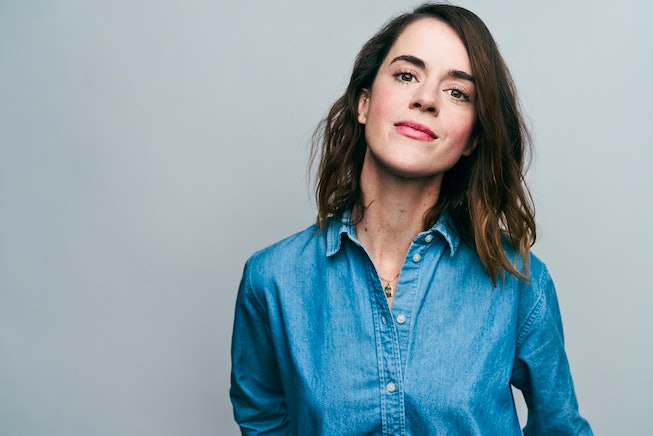 There is plenty to be thankful for when it comes to Happiest Season. For starters, it's a rare holiday film that centers around an LGBTQ+ couple as they navigate family and all of the stress that comes with all that togetherness. It has Kristen Stewart showing off her comedic side. There's also Dan Levy in his first major post-Schitt's Creek role. We even get a brand new holiday song from Tegan and Sara. But if there's one lasting impact the film will have on you (besides a new movie to add to your holiday media arsenal), it's the introduction of a comedic tour de force in actress Mary Holland.

Chances are you've already seen Holland in one of her many guest-starring roles on some of your favorite shows — Parks and Recreation, Veep, The Good Place — but in Happiest Season, she's unforgettable as Jane, the odd, but well-meaning sister, all but stealing the entire movie from an impressive ensemble cast that includes Mary Steenburgen, Aubrey Plaza, Alison Brie, and Mackenzie Davis. What's more, she also co-wrote the film with former Veep co-star Clea Duvall. "I'm such a fan of Clea's and would collaborate with her in any capacity," Holland said over the phone ahead of the film's release. "I was totally into it and I loved the idea. I thought it was such a beautiful story and over the process of writing it we were also becoming friends getting to know each other, so it was a very special process."

Here, Holland tells NYLON about the intricacies of creating a Christmas movie, her co-stars, and more.

How much of the story did Clea have figured when you guys started writing the screenplay?

The premise of the movie and the fundamental shape of it she had already thought through. When we got together she had it written out a one-page summary of like, "Here's what happens in the movie." We met over coffee and talked about it. It's inspired by her experience, so it's a story that's really important and personal to her. When we started fleshing it out and brainstorming all these other characters and the specifics of the set pieces of the movie, we had so much fun working on that together and creating this family and these other supporting characters.

When did it become clear that you would be the one to play Jane?

I have a sister and that's such as a specific and intense dynamic. We both thought that would be such a great relationship for Harper to play out when she goes back home. We wanted her to have sisters and knew we wanted one of them to be a little bit out of place with his family, like she doesn't fit in. And as soon as we decided that, I said I wanted to play her, and Clea allowed me to do so. So, we wrote Jane with me in mind very early on.

How much does that change your writing process knowing these are things you're going to have to do and portray yourself?

Jane became very close to me. I don't know how intentional we were about that or if that just organically happened. This family is so buttoned up and has these expectations of themselves to fit into what other people would define as perfect or good. We wanted one character to really not care what people think. I think Abby [Stewart] is one of those characters, but Jane also has that same self-acceptance and self-love and she's a real free spirit. And so, I feel like in the process of writing her there were a lot of things that I love that we had Jane love as well like fantasy fiction and artwork, and she also has this quality that I have which is like, "Is everybody comfortable? Are we all having fun?" Which is something that I do a lot, too. I really am very tuned into, "Is everybody having a good time? How's everybody feeling?"

She provides a lot of the film's biggest laughs, but how did you keep her from being just this one-dimensional comic relief?

Jane is a totally different energy than her family. She gets pushed aside by her family a lot and normally it rolls off her back. It doesn't stick and she doesn't take it personally. She's just so excited to be with her family. But then at a certain point it does start to have a cumulative effect. And we really wanted Jane to explode at a certain point. Because you see her the whole movie just getting ignored and pushed aside and not taken seriously and not given the same level of attention as her sisters.

I think it's so satisfying when you finally see Jane get mad and it was really satisfying to play. I remember when we were shooting that scene and the first take that we did of that moment where she explodes, I really went for it. I was shaking and I was like, "Wow okay, that came from a really real place." It was important to make her three dimensional and for all these characters to have a story and an arc and to have full journeys that they're going on, as well.

What was it like seeing this really impressive cast fill out these roles that you had created?

I feel like every single person in this cast just exceeded all expectations and made these characters come to life in a way that was so delightful. I loved how Mary brought to Tipper this lightness that even she has a very specific way of doing things and she wants everybody to abide by those rules, she has a brightness about her. I think that really made the comedy of Tipper stand out so much. Because for her to be like, "Okay, we're having a good time," and to have that brightness and airiness in her tone was really, really funny. Dan just floored me with his performance. He's exquisite, no surprise there. Kristen and Mackenzie are so clever and funny, and they're just very funny people [in general]. It is really great that audiences are going to get to see them play in this space because that is a great strength of theirs. Every single person in this cast made these characters completely come to life.

What was the hardest scene for you to film? I imagine the ice-skating was not especially easy...

That would be the most technically difficult scene. We all had to stay up on our skates, which was challenging in itself, and then also have this big competitive race scene that they did so well. But the climax of the movie I think we all felt a real desire to get right. I was constantly checking the schedule of when that seemed to happen and I'd be like, "Okay, it's next week. Okay it's in three days. Okay it's tomorrow." Just really making sure emotionally that we had built to that place and that I could, speaking for me personally, deliver and execute what we had envisioned for that scene. I think that I put a lot of pressure on myself to really get that scene right.

When it came to approaching this as a Christmas film, were there any movie troupes you did — or didn't — want to include?

We wanted it to feel like a Christmas movie. We wanted it to be universally relatable and recognizable as that. Holiday movies are so important to all of us. They become part of our tradition. They're comforting, they're something we look forward to watching every year. And so, we wanted to make something that would satisfy that desire with audiences, but this time with a new perspective, this time centering around a gay couple as two women in love. We drew from the things that we loved about holiday movies like The Family Stone and Home Alone and that kind of thing, as well as our personal things we've experienced in holidays with our families in order to make the movie feel very grounded and personal and yet still universal.