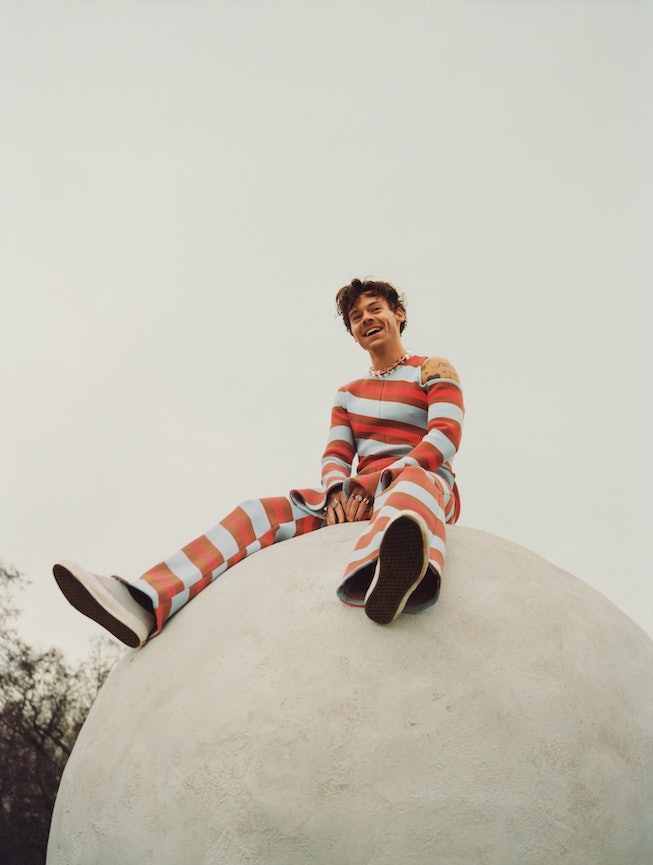 Harry Styles’ Harry’s House has arrived. The pop singer’s third album is his ode to the concept of home and its ever-changing meaning, exploring themes of belonging, love, physical connection, loneliness, and the chosen family you gain as you grow older in life. This latter theme is explored on the track “Matilda,” the intimate, plucky guitar song that’s quietly emerged as a fan-favorite and album standout.

It’s not surprising — the song, arriving in the back-half of the record, is stunning, and one of Styles’ most well-written songs. Centered around a girl named Matilda, whom the songs’ lyrics suggest grew up in a troubled or abusive household, the gentle ballad extends a moving level of grace and empathy to its subject, and in turn to other listeners who may be experiencing the same struggles. Featuring deeply intimate and sincere songwriting, it signifies a mature turn in Styles’ craft.

In an interview with Apple Music’s Zane Lowe, Styles revealed that the song’s main character is based off of somebody he knows in real life, though he’s wrapped her story and identity in the character Matilda, based off the protagonist of the same name in Roald Dahl’s infamous 1988 novel (and subsequent film).

“I had an experience with someone where, in getting to know them better, they revealed some stuff to me that was very much like, ‘Oh, that’s not normal, like I think you should maybe get some help or something,’” Styles told Lowe of writing “Matilda.” “This song was inspired by that experience and person, who I kind of disguised as Matilda from the Roald Dahl book. I played it to a couple of friends and all of them cried. So I was like, ‘Okay, I think this is something to pay attention to.’ It’s a weird one, because with something like this, it’s like, ‘I want to give you something, I want to support you in some way, but it’s not necessarily my place to make it about me because it’s not my experience.’ Sometimes it’s just about listening. I hope that’s what I did here. If nothing else, it just says, ‘I was listening to you.’”

For those who might relate to the song’s subject matter too closely, the song does listen and create a space of refuge and understanding for anyone suffering from “parent issues.” But the most moving aspect of the track comes from its lyrics and suggestion of a chosen family, once again broadening the album’s exploration of what, and who, makes up a home.

The start of “Matilda” paints an unassuming scene of her childhood, “riding your bike to the sound of ‘It's No Big Deal’/ And you're trying to lift off the ground on those old two wheels,” Styles sings. Though he hints at trouble in her interior life with the line: “So you tie up your hair and you smile like it's no big deal.”

When the song’s first chorus comes in, growing with additional sentiments as the song goes on, it’s clear that this is the backbone of the song. “You can let it go/ You can throw a party full of everyone you know/ And not invite your family 'cause they never showed you love/ You don't have to be sorry for leavin' and growin' up,” he sings directly to the subject of the song. The lyrics already begin to suggest that family goes beyond blood relations and offer the possibility of a life that doesn’t include people who may be toxic to you, whom you’d otherwise feel you’re obligated to be around given societal expectations.

In the song’s second verse, Styles’ careful positioning of himself in her story becomes clear with the lyric: “You showed me a power that is strong еnough to bring sun to the darkest days/ It's none of my business, but it's just been on my mind.” It’s a thoughtful aside, one that prevents the song from coming across as preachy.

Towards the end of the song, the chorus changes up, with Styles adding the new lyrics: “You can see the world, following the seasons/ Anywhere you go, you don't need a reason/ 'Cause they never showed you love/ You don't have to be sorry for doin' it on your own.”

Not only exercising empathy, the lyrics also hold an empowering message of choosing your own life and happiness, and later on in the song, choosing your own family. The song’s last chorus changes into: “You can let it go/ You can throw a party full of everyone you know/ You can start a family who will always show you love/ You don't have to be sorry, no.”

Already, the song’s message is resonating fiercely with fans. On YouTube, one viewer writes: “Just knowing that Harry knows he has a young audience and wrote this song for the Matilda's of the world who grow up in a loveless home makes me respect him even more as an artist and human being.” Another says, “This song just broke me inside I don't think I'll ever stop crying.”

While it’s unlikely the world will ever get to know the person who inspired the song, with “Matilda,” Styles turns a singular experience into a comforting anthem that’s applicable to anyone feeling out of step with their surroundings. It’s the brightest and most beautiful room in Harry’s House, and stepping inside you’ll feel right at home.