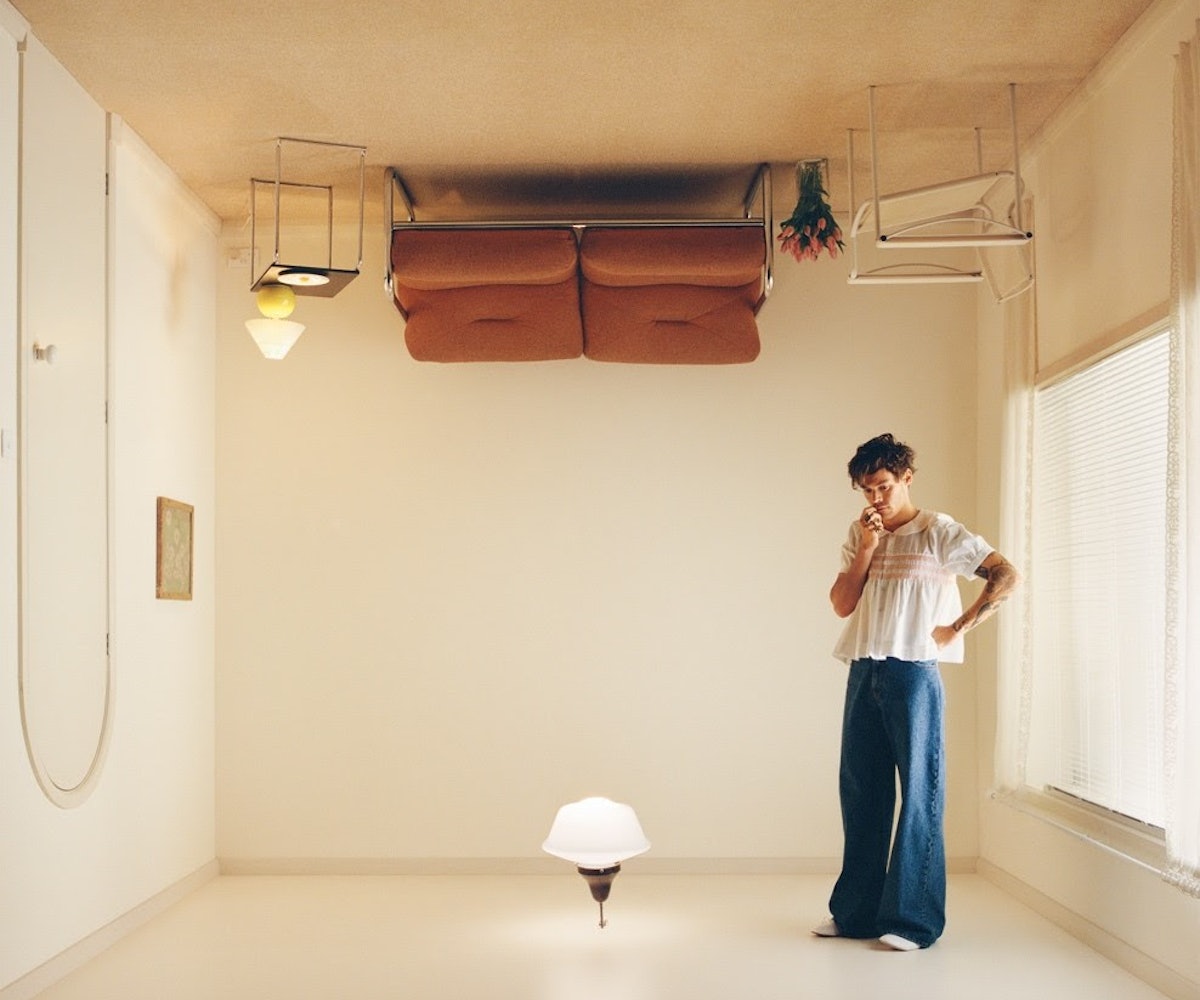 Harry Styles has put down his feather boa and taken off his intricately designed Gucci suits. On his third album, Harry’s House, Styles eschews the sequined grandiosity that defined Fine Line and delivers his most disarming and befuddling project yet. There’s scatting. There’s cocaine. There’s lots of sex. It’s a project that nods to Styles’ admiration for rock ‘n’ roll legends Prince and David Bowie without sounding like he’s trying to travel back in time to the glory days of glam rock or laurel canyon. The sounds and subjects explored are vast, illustrating Styles is at his most free and creatively open. But, it’s a mixed bag. Harry’s House takes the moodiness of his first album and the vibrance of its follow-up for a collection that holds his most successful songwriting, but ultimately feels like an uneven hodgepodge.

In a recent interview with Zane Lowe, Styles compared therapy to discovering new rooms in a house. “You open a bunch of doors in your house that you didn’t know existed,” he explained. “You find all these rooms and get to explore them. In a time when it would be easier to emotionally coast, you can no longer do that because you know the room exists.” Styles uses that same mentality on Harry’s House, pushing his songwriting to experimental limits without prioritizing radio hits. Even though it’s one of the weaker points on the album, the sole single “As It Was” sets up the project’s conflicted tone with its bouncy, bright-eyed energy contrasted against its mournful subtext.

The album’s melancholic moments are some of its strongest. Taking stock of his emotional growth, Styles analyzes his relationship with England on album standout “Love of My Life” and reflects on a friend’s family trauma on “Matilda,” shading in these reflective songs with scenic details. It’s like walking through the halls of his memory, jumping into past moments by looking at pictures on the walls. On “Little Freak,” his stream of consciousness writing makes it seem like Styles has divulged small secrets as he flashes between memories and feelings against a somber electro-pop background: “I spilled beer on your friend/ I’m not sorry/ A golf swing and a trampoline/ Maybe we’ll do this again,” he sings to a former flame. But it’s the song’s subtle hints which suggest Styles is wrestling with the darker parts of his psyche that are the most interesting: “Somehow, you’ve become some paranoia/ A wet dream just dangling/ But your gift is wasted on me,” he cryptically intones.

Throughout the album’s most introspective songs, Styles never lets his guard down completely. Like reading a letter with all the sentences out of order, these songs illustrate his growing skill in setting up a world without giving too much of himself away.

Similarly, waltzing synth-pop track “Keep Driving” is riddled with that contrast of scene-painting and oblique, poetic phrases. “A small concern with how the engine sounds/ We held darkness in withheld clouds,” he sings amidst bright ‘80s sitcom synths and a carousel melody. “Cocaine/ Side boob/ Choke her with a sea view,” he lists later. The song takes on a darker tone with rumbling distorted guitar. “Should we just keep driving,” he gently asks as if the fever dream of images didn’t already cause the car to crash. These gentler tracks woven with surreal imagery demonstrate Styles coming into his own as a songwriter. The paired down, eerily pleasant production puts emphasis on these complex perspectives, where Styles is at his best exercising empathy.

Like reading a letter with all the sentences out of order, these songs illustrate his growing skill in setting up a world without giving too much of himself away.

Oddly enough, for an artist who weekly goes viral for his charm, Harry House falls flat at its horniest moments. He isn’t hiding behind double entendres or fruit imagery to express his desire anymore. Instead, he lays the cheese on thick and reverts to other food-related metaphors. “I could cook an egg on you,” he admits on the funk freakout of “Music for a Sushi Restaurant.” He’s accompanied by jubilant horns, so excited by the sex appeal that he improvises and throws in a few scuba duba dubub boos. On the saccharine “Daylight” he sings: “You’d be the spoon/ Dip you in honey so I could be sticking to you.” But it’s the stale attempt at baby-making music on “Cinema” where the album hits its lowest point. The track, built around a sly but ultimately lackluster funk guitar melody indistinguishable from “on hold” music, is a clumsy attempt at describing sexual chemistry that relies on confusing songwriting. Explicit verses (“If you’re getting yourself wet for me/ I guess you’re all mine”) feel undeserved for a chorus built on insecurity: “Do you think I’m cool too? Or am I too into you?” Fine Line’s “Watermelon Sugar” changed how we look at the summer fruit by comparing the euphoria of oral pleasure to its tasty juices. Unfortunately, the sex appeal of movie theatre seats and the sticky floors of an AMC don’t conjure the same thrill.

Harry’s House holds the extremes of Harry Styles’ catalog; this batch of songs includes some of the best and some of the worst songs he’s ever released. Initially inspired by Japanese musician Haruomi Hosono’s 1973 album Hosono House, Harry’s House was meant to be a concept album made with the intention of recording the whole album at his house. Instead, the pandemic forced Styles to rework his plan, eventually recording it in multiple locations in England and Los Angeles. Harry’s House probably shows a more realistic version of what his real experience of home is as a superstar constantly on the move. It’s lived in, fractured with paint chips or floorboard creaks, a bit messy, but still compelling to explore.