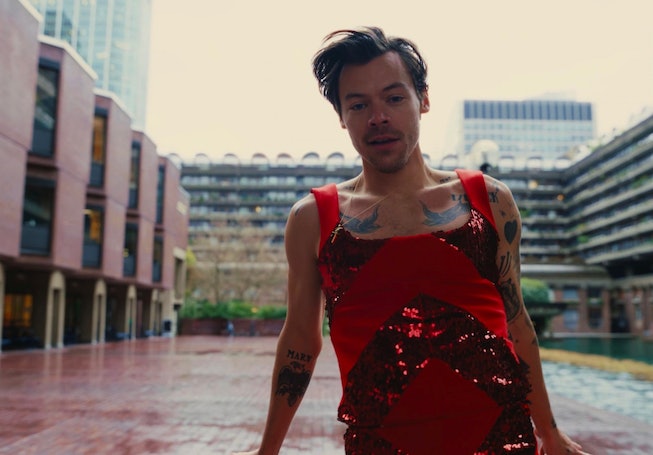 The first single from Harry Styles’ much-anticipated third studio album, Harry’s House, has arrived and the internet’s already been abuzz with theories and speculation about what the song’s about.

Unlike with Fine Line, which dripped unsubtly in its subject matter, the larger themes of Harry’s House and its lead single, “As It Was,” have proven to be much more elusive. With Fine Line, Styles stated bluntly in an interview that the album was all about “having sex and feeling sad.” He has, however, been much more mum and restrained about the origins of his upcoming music. He announced the album in late March on Instagram with little fanfare and explanation. And the few interviews he’s done for the release of “As It Was” have only managed to confirm that the little girl’s voice which opens the song belongs to his goddaughter, Ruby Winston, that the song is about “metamorphosis,” and that it’s based off “personal experience” and his experience during lockdown.

“I’d say I try and write from personal experience for I’d say almost everything,” he told the U.K. radio station Heart. “I think over the last couple years and stuff, you know with the forced pause that happened for a long time for all of us, I think I had a lot of time to think about and work out who I was away from music and get a little more comfortable with it. I think that allowed me to make this album from a very liberated place.”

These are safe enough answers to actually reveal very little about the backstory of the track, but enough to dispel some early theories about the song, like the fan-concocted belief that it was one of Olivia Wilde’s children who opens the track. Yet its other popular theories have been more difficult to confirm; is that one lyric, “Leave America, two kids follow her,” a direct reference to Wilde and her transatlantic life splitting time between Los Angeles and London? Realistically we’ll probably never get confirmation, as Styles has firmly stated in the past that he’s “always tried to compartmentalize [his] personal life and [his] working life.”

Despite all that, there’s still plenty of information to piece together an overall meaning to the song’s lyrics — Styles’ most nontransparent to date — and parse exactly what topics have been ailing the singer’s mind as of late.

From the top, “As It Was” is infused with an air of melancholy as Styles sings about feeling held back, or rooted in one place, and wanting someone to reach out to him. “Holdin' me back/ Gravity's holdin' me back/ I want you to hold out the palm of your hand/ Why don't we leave it at that?/ Nothin' to say/ When everything gets in the way/ Seems you cannot be replaced/ And I'm the one who will stay,” he sings on the first verse.

Given that the track was inspired by life under lockdown, these sentiments make sense as the entire world was forced to learn how to cope with new feelings of isolation and disconnection. That detail adds clarifying context to the song’s hook, which finds Styles straight up acknowledging a shift from what used to be: “In this world, it's just us/ You know it's not the same as it was.”

With lockdown as the backdrop, the rest of the song’s lyrics can become interpreted as Styles’ own struggles and observations around loneliness, as well as a renewed reverence for closeness and human connection. Its second verse is the most telling: “Answer the phone/ ‘Harry, you're no good alone/ Why are you sitting at home on the floor?/ What kind of pills are you on?’/ Ringin' the bell/ And nobody's coming to help/ Your daddy lives by himself/ He just wants to know that you're well.”

The mention of the phone seems like a direct reference to his nightly phone calls with his goddaughter which, Styles revealed in interviews, she was in the habit of doing during lockdown. It’s also where he got the voice clip from the start of the song from — “I missed one night and she let me know she wasn’t happy about it,” he said. No doubt the calls became a vital form of connection between the two, and he seems to have found a newfound appreciation for that action of checking in with the following lyric: “Your daddy lives by himself/ He just wants to know that you're well.”

And while the song’s bridge is where fans have placed the most speculation, in this context it reads more like a brief laundry list of ways to escape or force an adaptation to a changed world, the mention of the two kids a possible reference to anyone who was made transient during that time: “Go home, get ahead, light-speed internet/ I don't wanna talk about the way that it was/ Leave America, two kids follow her/ I don't wanna talk about who's doin' it first.” But, we admit, it’s also the song’s most opaque verse — and who are we to say that it’s not actually, really about Wilde?

What does remain clear by the end of “As It Was” is just how intimate and personal Styles’ ruminations are across his songwriting, from the specificity of his lyrics to the intention of wrapping its themes up in a bright, ‘80s pop-inspired sonic bow. Whether he’s talking about loneliness in lockdown, his relationship, or, more likely, a mix of both, there’s a maturity and writerliness present that we haven’t seen yet before. It making us curious about what’s left to be explored in Harry’s House.