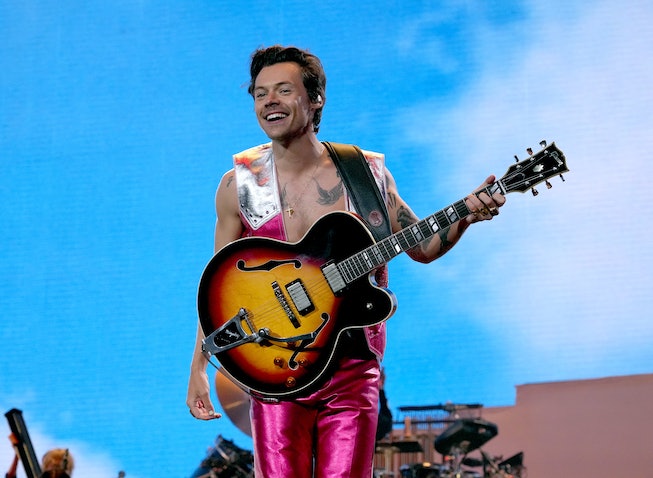 Harry Styles’ upcoming third studio album, Harry’s House, is an ode to life’s many changes. To celebrate its release, the singer-songwriter was profiled by Lou Stoppard for Better Homes and Garden. During the interview, Styles discussed how he’s evolved as an artist since his One Direction days and revealed some of the more the stressful aspects of being a part of the world famous boy band.

One Direction was created by Simon Cowell on The X Factor in 2010. The group — which also included Zayn Malik, Louis Tomlinson, Liam Payne, and Niall Horan — didn’t win the show, but they became a massive success after it aired. Together, they released five albums, which Styles revealed was a grueling process. The songwriter told Stoppard the band’s management was focused on maintaining their relevance, saying, “[It was] all about how do you keep it going and how do you get it to grow? There were many years where, for me, especially in the band and the first few years coming out of it, I’d just been terrified of it ending,” he continued. “Because I didn’t necessarily know who I was if I didn’t do music.”

After the band split in 2016, Styles pursued his own career. The singer revealed that he burst into tears after signing a solo contract. “I felt free,” he said. Though Styles repeatedly confirmed that he enjoyed being in One Direction, he also expressed feeling uncomfortable with his lack of privacy during that time.

For instance, according to the singer, all of his baby photos are public. He said the X Factor required him to submit a bunch of content to the shows producers so they could make backstory videos, but now most of his childhood is online. Styles also opened up abut the inappropriate questions he was asked as a teenager — most of which speculated about his love life. Rather than asking reporters to stop, the singer would find ways to answer the questions vaguely but often felt bad about being indirect. “Why did I feel like I’m the one who has done something wrong,” he said reflecting on the experience.

Along with the constant probing into his personal life, Styles said he was instructed to behave in accordance to “cleanliness clauses.” The rules were embedded in contracts that he had to sign, which threatened consequences if he did not obey the rules. The restrictiveness of those agreements ultimately led Styles to be fearful of making mistakes during his most formative years.

"For a long time, it felt like the only thing that was mine was my sex life,” Styles said. “I felt so ashamed about it, ashamed at the idea of people even knowing that I was having sex, let alone who with.” He continued of his 1D days, "At the time, there were still the kiss-and-tell things. Working out who I could trust was stressful. But I think I got to a place where I was like, why do I feel ashamed? I'm a 26-year-old man who's single; it's like, yes, I have sex."

Now, as a solo artist, Styles has the freedom to behave authentically and create whatever he wants. According to the singer, Harry’s House was crafted during the pandemic when he had the time to experiment without strict deadlines. “I’ve always made my worst, most generic work when i’m just desperate to get a single,” he said.

The upcoming record is a mix of songs that reflects on what “home” means to the singer. “I realized that, that home feeling isn’t something that you get from a house,” he said. “It’s more of an internal thing. You realize that when you stop for a minute.”