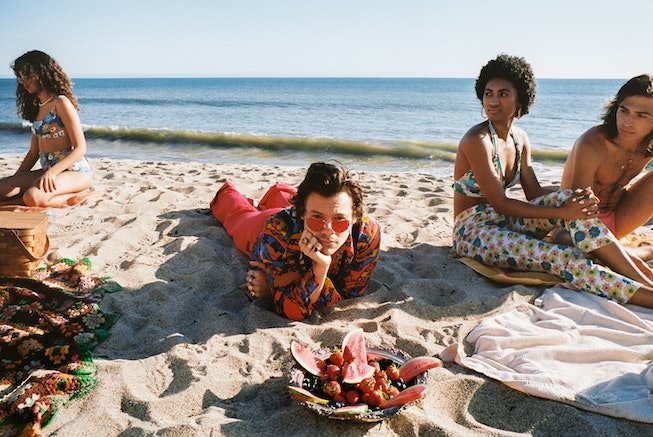 If ever there was a more apt message that warned of the content that lie ahead, the opening dedication to Harry Styles' "Watermelon Sugar" video is it. The former One Direction heartthrob finally unleashed his new Fine Line visual, which he "dedicated to touching," an interesting sentiment now that the world is stuck in a moment of Not Touching Anything If Possible. True to Styles' word, the Bradley & Pablo-directed video is a major touch-fest once it properly kicks off. Styles and a crew of stunning models eat fruit and touch (kiss? caress?) each other on a Malibu beach, making for an incredibly indulgent — and also mildly depressing — scene to bear witness. It is also very hard to look away.

To be fair, the content of the song definitely warranted a horny-enough video as this one, as Styles sings unabashedly about how he "just wants to taste it" and get "watermelon sugar high." (One guess for what "it" is!) The video is equally as unsubtle as the women beam with pleasure while holding a watermelon between their legs. And yet — how many watermelons I would fake-moan into if I could just be on a beach outside without fear of dying right now! In many ways, Harry Styles is brave in showing us what we all want right now: being horny on a beach somewhere.

Styles released Fine Line last December. The 12-track record, which included the singles "Lights Up" and "Falling," is rumored to be about his ex-girlfriend model Camille Rowe. Watch "Watermelon Sugar" below.

NEXT UP
Entertainment
Harry Styles Is Performing At The 2023 Grammys
Entertainment
Muni Long On The Grammys, Burnout & Not Worrying About The Labels
Entertainment
Annie DiRusso Makes Indie Rock For Your Growing Pains
Entertainment
Raye Explicitly Speaks Her Mind On Debut Album, ‘My 21st Century Blues’
Style + Culture, delivered straight to your inbox.