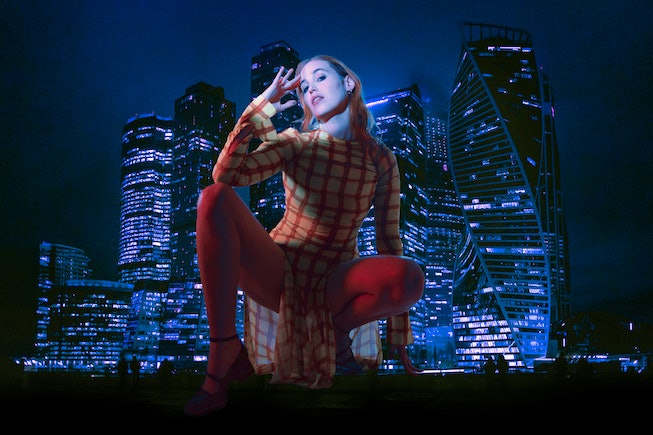 Hatchie is the project of Brisbane singer-songwriter Harriette Pilbeam who makes sparkling pop music that goes down the gullet like a fresh-cracked can of fizzy pink lemonade. Since she emerged in 2018 with her strong debut EP, Sugar & Spice, she’s continuously chipped away at a sound that’s completely her own: huge-feeling anthems with straightforward lyrics that get stuck in your head more often than not.

On her 2018 album, Keepsake, her songs mined the sweet and sour details of love and, like its title suggested, glittered like crystals in a jewelry box. Now, she’s gearing up to release its follow-up, Giving The World Away, a record that she promises will be bigger, wiser, and contain her most glossy music yet.

If you ask Hatchie what’s the biggest difference between the music she made five years ago and her newest songs, she’ll point to the lyrics, which on this new record probe deeper into her psyche and inner turmoil than ever before.

“I felt like [my past music was] all surface level lyrics that I've been working on since I was in my early twenties,” she tells NYLON over a recent Zoom. “So, for me as a 28-year-old now looking back on them, I was like, ‘Oh I feel like I can go a lot further with these.’”

On “Quicksand,” the album’s thrilling new single, she sings about feeling disillusioned and stuck, remarking relatably on its hook, “I used to think that this was something I could die for.” Written during the global turmoil of the last two years with the help of Dan Nigro, the producer who famously brought Olivia Rodrigo’s “Deja Vu” to life — its lyrics are dark but the sound is still dazzlingly bright, gleaming in 3D like a disco ball. If there’s more like this coming up, then we’ve got a feeling that 2022 is going to be Hatchie’s year.

Hear “Quicksand” above and read on for our conversation with Hatchie about her new album, pushing herself lyrically, and why she doesn’t listen to “depressing-sounding” music.

Thematically, “Quicksand” probes a bit deeper than your previous music. Would you say writing it felt different?

That’s something that I really wanted to do with this album, push myself a bit further with lyrics, because when I listened back to my first one and my first EP, I felt like they're all surface level lyrics that I've been working on since I was in my early twenties. For me as a 28-year-old now, looking back on them, I was like, "Oh I feel like I can go a lot further with these."

I really pushed myself with “Quicksand,” and Joe and Dan [Nigro] definitely helped a lot. I'd be second guessing stuff like, "I don't know. Should I say that? That's a bit much." I think Dan came up with the, “I used to think this was something I could die for,” because originally I was just repeating the first half of the chorus. It's a bit more depressing, but there's a little glimmer of hope in it as well, but it covers a lot of how I was feeling at the time, which was just really confused and dissatisfied. And then annoyed at myself for being dissatisfied with my life because everything was going right.

What I love about your sound is that it’s always so upbeat, and it still is on this track. What is it about that contrast between darker lyricism and a bright and upbeat sound that you like so much?

I think it helps things feel a little less melodramatic to me. I don't listen to super depressing-sounding music much. I did a lot when I was younger but for some reason I don't these days. I think it makes me too sad.

The Sundays were a really big influence on me when I started this project and I remember just loving that mix of really sad lyrics but hopeful sounding music. I don't know why, if it's just because it takes you by surprise, or maybe because it's just not too sad, so I don't get too depressed. I don't know. I don't know what it is. I just think it's really interesting and it's more fun. I wanted to write music that was more fun to perform live with this record as well. So, I think it rubs off a lot on the songs. There's less slow ballads than my first album for that reason.

What would you say was the biggest difference you felt in making this record in comparison to Keepsake?

I would say I was more thorough with this one because I was a little more selective with the songs that I chose to work on for it, whereas with Keepsake it was like, "These are all the songs that I've written lately."

With this one, it was a bit more planned out and conceptual and it was more collaborative as a whole. There was collaboration on every song, whereas with Keepsake, there was collaboration, but it was less co-writing. This whole album was co-written with Joe or some of them were with Jorge [Elbrecht] who produced it. It was a lot more of a teamwork kind of thing, which was really good, because I think that allowed me to be more thorough and get more out of each song because there were more people contributing. The lyrics had more iterations and more rough drafts and stuff rather than just like, "Yeah, this will work," and just not really thinking about how permanent the lyrics were. In the past, I hadn't thought about how permanent it was, and now I'm like, "Wow, I can't change that now. I really should have put more time into it."

How do you feel listening to your old stuff nowadays? Do you revisit your old songs much?

Not really. I'm still really proud of them but I don't listen to them unless I'm trying to figure out a set list for a show. Often I just find that I'm kicking myself over things that could have been better or different. I'll be like, "Damn. I should have said that." Or I'll hear a vocal part, and I'm like, "Oh, I really could have redone that better, or I could have sung it a bit differently." I'm trying to do that less, and just accept that it's always a work in progress and it's never going to feel finished. I don't think it's ever going to feel finished to me, so you just have to find a moment where you feel happy with it.

Sonically, what can people expect to hear from this record?

Is there a song that you're most excited for people to hear?

Hatchie’s Giving The World Away is out 4/22 via Secretly Canadian.