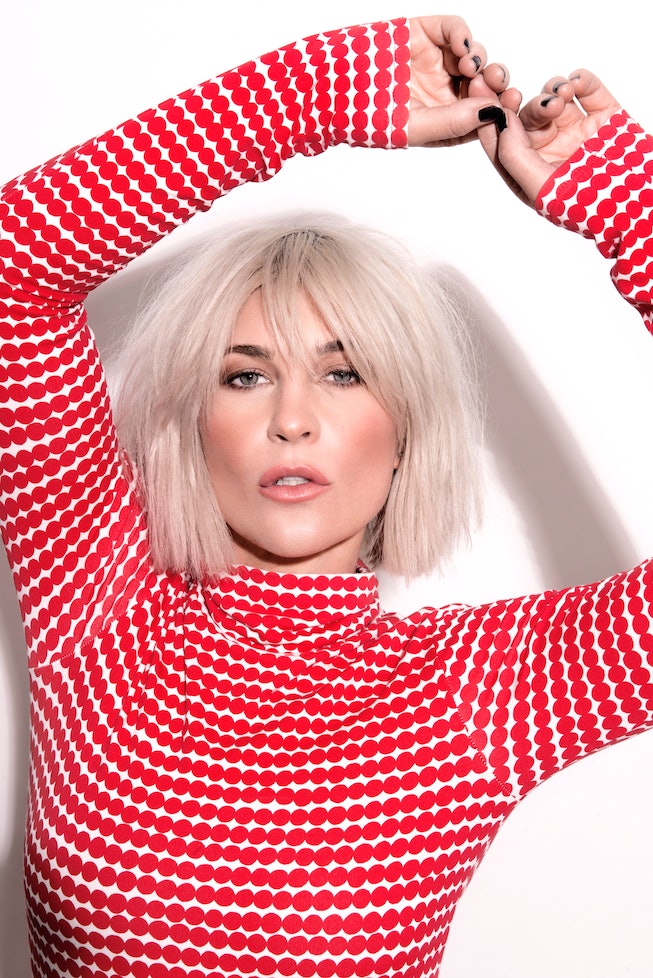 The piano ballad, which bursts into a cathartic pop anthem midway through, flips the traditional narrative and power hierarchy of a break-up: someone leaving and someone being left. Instead, on Haywood’s cresting, emotional track, she embraces being a “bleeder,” the underdog position that she spins into a role of strength and power. After all, the act of stitching oneself up time and time again is an act of hope. “Now I’m just a bleeder, baby you’re a leaver,” she sings on its chorus.

"So many people have spontaneously cried when I’ve played it for them,” she tells NYLON of the song. “Something just tears you up – it’s the loneliness, the vulnerability, and the acceptance of being the underdog that captures people. That being said, I didn’t want it to end there. I wanted the end of the song to explode with hope. Even if it’s hope in an admission, knowing you’ve fallen for a lie and embracing the brokenness… that’s the point where you find freedom."

In the Fred Cochran-directed video, Haywood belts out the song during a storm as the visual weaves a story between two strangers, both down on their luck, as they collide together in a moment of redemption.

Watch it below and read on to learn more about Haywood, the story behind “Bleeder” and her journey of creating the video.

What are you up to now — describe your surroundings.

Right now I’m physically in front of my computer arranging and printing stems for a live show, but mentally I’m getting a fish pedicure in the ocean in the Maldives with a rosé in hand.

What inspired you to write “Bleeder”?

Strangely enough, there’s a couple close people in my life that I was thinking about when I wrote this song. It’s a mashup of two stories. One is an artist I’ve worked with, another is a close friend. The artist was going through a really tumultuous time in a relationship and I could kind of hear this cry. I saw a house with her in the top level, kind of like Rapunzel, leaning out a window as he drives away after getting what he wants out of her, and her thinking each time it will bring her a little closer to locking him down, which it never does. Each time he leaves, the pain of feeling used and abused intensifies. Ultimately that was the original picture I had in my head, which became a story of unrequited love and the admission of feeling hopeless in a situation.

What was your favorite part of shooting the music video?

Honestly, every part was my favorite part. It was a five day shoot, we were coordinating with everyone’s schedules, and then the week before, one of my original cast got Covid and we had to recast the bike rider. We had a week before shoot time to lock someone in. A name dropped into my head, which is Ben Smith, married to Riley Keough, who I’ve known for quite some time. I hit Riley up and asked if he would ever do it, and she generously made the connection. What I didn’t know is that Ben, as well as being an amazing actor and stuntman, is also a stunt coordinator, and helped coordinate the entire crash scene. It was one of those moments where the universe fell in line and I knew what we were creating was in safe hands.

My other friend Len Wilson had never acted before but I knew he was the one. I knew his face would translate the pain and I trusted him with it, and he just was unbelievable. My director Fred [Cochran] who I’ve worked with on every video to date, pulled off the impossible. His eye and also his synergy with me when I have a clear vision is such a powerful thing to experience. We did partial street closures, had a police squad warding off drag racers, cars throwing whip-its out the window at us. We were all hoping we’d make it home alive that night.

Besides making music what do you like to do in your free time?

I have two beautiful angel babies, Rooney and Goldie, that keep me off my face busy. I also have a few other businesses on the side including a candle company called Otis and leaf and a coffee shop called Red Window Coffee. Apart from that, I’m like Jerry Maguire: I can’t be alone! So I’m always hanging with friends and hitting a charcuterie board and French rosé. Sometimes I get so busy I forget to stop and just be still, so I’m working on that too.