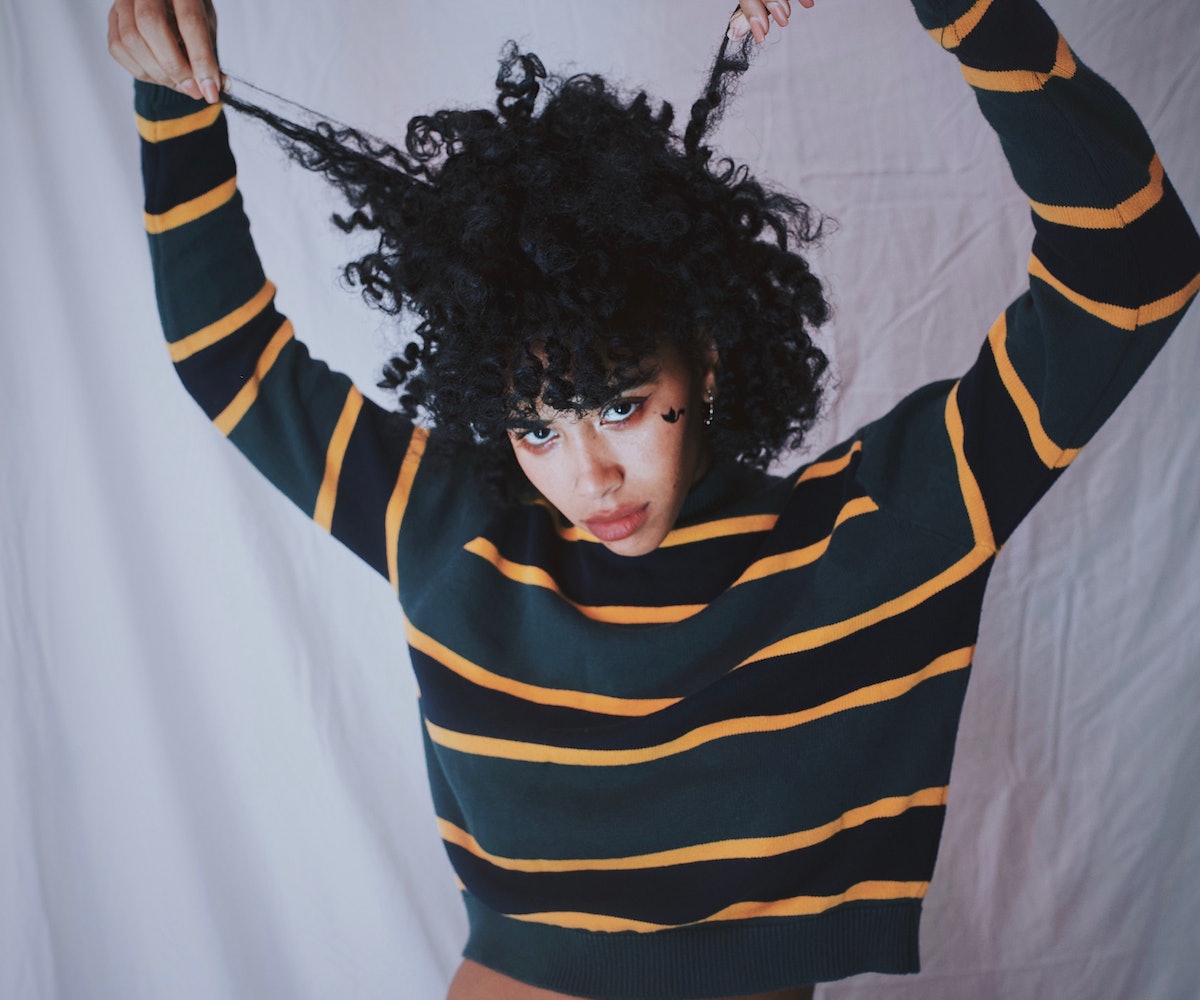 “For some reason, I operate quite nicely with a bit of pain,” Herizen muses. One of the first things the 24-year-old actor and singer says when she picks up the phone one recent Wednesday is how her latest EP, Demon, returns back to “the darker side of music” from her last release, which she considered her "happy break." She sounds absolutely giddy about the switch, and her reasoning is, frankly, quite practical: “It makes for better lyrics and I don’t mind being in a bad mood.”

It’s not surprising to learn that the young Oregonian feels such an affinity for the gloomier parts of life. The roles she plays on television — Yoruban goddess Oshun on American Gods, and conflicted cheerleader Addy on USA’s Dare Me — are often imbued with shadowy figures and complicated backstories. Plus, hear her list all the music she grew up listening to — Nirvana, Korn, Metallica, Black Veil Brides — and it’ll start to make sense.

Demon, Herizen’s new collection of brooding, misfit punk-pop songs, then, can fittingly sit alongside any of the beloved soundtracks of her childhood. She wrote the project after experiencing a “heartbreaking breakup.” She tunneled deep into her anger and sadness, emerging with four shiny, gripping tunes that bristle and seethe. "Range Rover,” with her distorted, clipping vocals, sounds like a transmission from hell. The sweet “Flower” is acoustic, raw, and tangibly textured with quiet rage; “I’m no angel, anymore,” she wails. It is a potent and enthralling reset for the young artist, and on a wider cultural scale, an acute reminder of how the new generation has taken the gnarled roots of the golden age of metal and punk, and run with it.

Below, speaking from her home in the forests of Oregon, Herizen takes NYLON into the making of Demon, being inspired by Lil Peep, and the intense acrobatic act that is balancing her acting and music careers.

"Flower" and "Hellboy" almost fit into this pop-punk revivalism happening right now. Was that a subculture you were involved in growing up?

I was, like, too young. I wasn't allowed to listen to it. But I would actually have to sneak away to listen to it. I was 10 when The Black Parade came out. And I was already getting into really, like, on the darker side of things. A lot of Nirvana, and I liked Korn, and Metallica, and Black Veil Brides. My parents, they would walk into a 10-year-old's room and they would just hear screamo. I would definitely say that influenced me, my type of music, my writing. Like I said, I took a little happy break there. I was happy, but I'm back.

You went through heartbreak but you sound so glad to be back on the dark side.

For some reason, I operate quite nicely with a bit of pain. It makes for better lyrics and I don't mind being in a bad mood. I kind of enjoy myself when I'm dark and in my room and on my guitar. I would say one artist that also triggers this and was a part of my heartbreak was Lil Peep and him dying was really painful for me. I was listening to him all day yesterday. I felt really connected to him as an artist. I felt like a lot of stuff he was writing, I was almost writing at the same exact time. I connected with him so much and his lyrics resonate with me and I think it's 'cause he's one of the artists that makes me feel all the emotions, which is something that kind of inspired me to not even be shy with what I write. Because maybe I could be that for someone else too. Not just happy or sad, but also the confused and the anger, which I feel like is lost a lot because it's usually the happy-sad. There's all that gray area in between that I feel like a lot of artists don't cover and he did.

Have you thought about why you're so drawn to the darker side of things?

I definitely think I was just born like that. I don't know. Even from the books my mom would read me, I'm very connected to fairy tales and magic but I had a very light, beautiful, magical childhood, and I did a lot — like I said I was homeschooled. I didn't have friends even up until high school. I had friends but they lived really far so I would only get to see them every so often and I wasn't allowed to do a lot. And I think that music is the only thing that I could get away with because of, like we didn't have TV, really, we weren't allowed to watch TV. So music was the only thing that I could get away with because my mom got me an iPod when I was 10, or 11. And I got really into rock and dark music and not just dark music, ethereal music that had a haunting feel. Just the dark side of the forest. We still have the magic but it's like Hansel and Gretel; it's the Grimm brothers' version.

Is there a particular song on the EP that you feel that was hard for you to write?

I mean, I cried the whole time in the studio that I was writing "Hellboy." I had to go outside to take breaks because I was like, choking on my words. "Flower" was, the version that you're hearing is actually one-take. It was me playing the guitar, we didn't do anything to it because it was all so raw. Like, "Hey, we're just going to keep this an MTV Unplugged vibe and just release it." Some of it was even freestyle; I just picked up the guitar and started singing.

I saw you co-produced every song on this EP and on "Range Rover," there are some bold stylistic choices with the voice clipping, and whip sound effects. What prompted that?

Honestly, the "Range Rover" track was me being pissed off but also wanting to feel my pride and not allow my pride to be hurt in a way, when I wrote that song. To me, it was kind of brushing off everything that happened and being like, "F*ck you," whatever. Like, "I'm the sh*t." [Laughs.] I guess the weird sounds, like voice effects, is me, like my double side on it. LIke me straightforward, but then there's shakiness in my voice, which is like me being unsure of what I'm saying, which is kind of what that felt like to me. On almost all my songs you'll hear a little demon voice underneath, and that's just like the demon of my feelings and everything that's happened. And that's kind of why the project is called Demon.

The other half of your life, you're an actor. Balancing these two parts of you, is there anything important that you've learned or realized about yourself?

Yes, definitely. Something that I've learned about me is that I have to do one at a time. I can't do both, I'd go insane. And I care about both. I mean, music is definitely my number one passion, I've just always made music since I was little and it's one of the only things that I know. So I definitely would say that comes most natural to me and something that I would never consider stopping. But I have to give my entire self including my physical body to each body at a time because otherwise it gets all confused in my head for me because I create from a very deep place in my head. And if I have too many things going on, like I'm writing a song and still trying to memorize my lines, each character that I play deserves my full attention and body and mind.

Do you find that things that you learn while acting can be applied to your music career?

Yeah, I mean, everything that I think... Projects that I go for are all a part of my plan and who I am and where I'm going as an artist. I'm not two separate people even though I have to do them separately, I'm one person and so I like everything to be cohesive. Which is why Dare Me was perfect, because it was very dark, and my upcoming projects are very dark. And then I'm in the next season of American Gods, which is also dark but magical, which is kind of what everything is for me right now. So everything is — there's a plan.

Demon is out now.