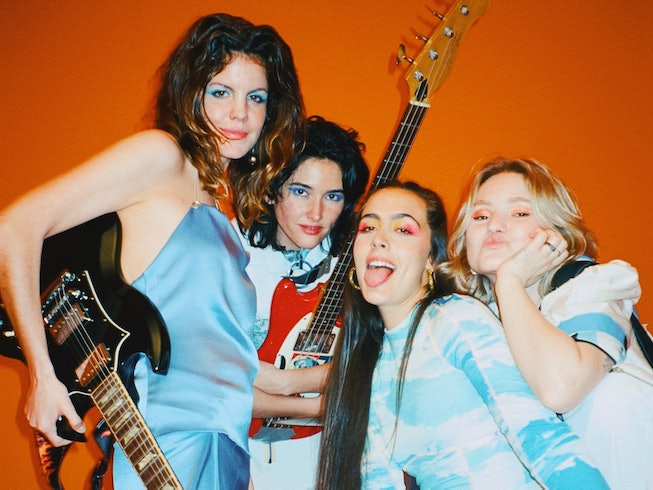 Hinds is missing life on the road. When three of its four members blink onto the computer screen on a recent May morning, the restless energy that usually lights up their press interviews is instead a subdued chill. Since lockdown hit their hometown of Madrid, Spain, on March 14, the indie rock quartet has been cooped up in their respective homes with nothing to do but stay inside and wait. Thankfully, things are looking up.

“For one week now, we've been able to go for a one-hour walk a day, which is a massive difference,” Ana Perrote, vocalist and guitarist, says of Spain’s slowly loosening restrictions. “I see a little bit more smile and less grumpiness.”

Like many musicians whose album releases coincided with COVID-19, Hinds made the difficult decision to push back the release of its third studio album, The Prettiest Curse, from April 3 to June 5. For Perrote, it just felt wrong to be promoting new music during a time when everyone was scared and had no idea what was going to happen. Now that that’s more or less become the new normal, Perrote reasons, at least, they “can be happy-ish in this situation” and finally share the music.

Because Hinds is happiest when living that rock ‘n’ roll tour life. The band’s deep adoration for playing shows and bouncing through hotels saturates the new record. Its 10 poppy tracks — recorded in Brooklyn alongside producer Jenn Decilveo — details all the ways traveling the world strains your relationships back home, invites paranoia in, and also makes you face annoying sexist comments if you’re an all-girl band doing it. Yet, if you take the album as Hinds’ fraying and resolute love letter to its craft, by the ultimate track “This Moment Forever,” one gets the sense that the band still loves every second of it. As a project, one that truly blooms from its floor-to-ceiling sound, it is also Hinds’ most realized music yet.

NYLON caught up with the crew — Perrote, drummer Amber Grimbergen, and guitarist-vocalist Carlotta Cosials, who almost forgot about the interview and crashed it midway through (bassist Ade Martin was unavailable to join) — to discuss what it was like recording in NYC, the things they do to keep busy on tour, and the importance of speaking out on the sexism as an all-woman band.

Your previous albums were recorded at home in Spain. How was recording this one in New York?

Perrote: We went from total opposites. From somewhere where you cannot find a bar to literally the city with the most amount of bars in the world. Also, it was a longer period; it was three weeks, and I think it was very, very helpful to disconnect and do whatever we wanted or to even go and see shows and get excited about making music.

I get the sense from the album that being on the road really affects all of your relationships, romantic or not. What's the biggest lesson you guys have learned from touring?

Perrote: I think it really forces you to be very empathetic. Obviously, when you're on the road, you're constantly sharing everything. You're like a family, but you're a very, very tight, maybe too tight family. At least to me, it has shown me to see through people. Not, "Oh, she just yelled at me, or she was annoying to me, oh I hate her." It made me think about why everyone is doing things and to see the bigger picture than just you and what you're receiving and how it's making you feel.

Grimbergen: I agree with that, but also, when we started we used to eat like chips and not healthy. [We realized,] maybe we should ask for tomatoes instead of chips. That also really, really helps.

Perrote: Sí, sí, we manage to stay healthy. Do you remember? Amber, you and I on tour exercised more than I had ever exercised in my life. It takes a couple of years for everyone to realize that that is going to be your reality. It's not going to be your weekend or your parties. No, no, that is your Monday, Tuesday, Wednesday, every day of the week. So you're learning how to cope with, obviously, having fun but also staying healthy mentally and physically.

Are you guys looking forward to touring again?

Perrote: Sí. Especially now. If we had a doubt, now we can't have it. We miss it more than ever. I think we're just more aware of the goods and the bads of touring. Because we've toured so much — I don't know how many tours we've done — we know each other a lot. We know what we like for touring. For example, we know that opening bands are super important for us, and Amber is always in charge of that. Having friends on tour seriously changes the whole experience. Everything. Having someone to actively look forward to see in the crowd when you're playing? It's just like... it feels like a present.

Grimbergen: It helps you be a little more of a person. When you finish the show, maybe you don't want to go to sleep. Maybe you want to hang with somebody and have a beer and share, whatever, and talk about something. It feels human.

Perrote: It's weird because you can't really put tour as a one thing. It's nothing to tour in England in December or to tour in the spring in the States. It is literally two different experiences. I can tell you we hate touring in the cold. That we hate it and we're always going to hate it.

When does "the curse" come in?

Perrote: I think it comes with the sacrifice that you have to make to be on tour. For your own self, things you have to stop doing because you are on a van and you can't paint because you don't have brushes there. Whatever makes you happy suddenly it feels like none of those things, I cannot have, because I had to choose, so I chose music and touring and that eliminates absolutely everything else. On a personal level and obviously, the sacrifice of missing out on the people you love's life. A wedding? Who knows if you're going to make it. If someone is pregnant? Who knows if you’re going to see the baby. It's like a paradox of the things that makes you the happiest, makes you the unhappiest as well. That paradox of the prettiest of the curses.

On the album there's the song “Just Like the Kids,” which talks about the sexism in the industry and how now it feels sexist to ask women what it's like to be a woman in the industry. Do you guys still get these questions when you're talking to people in press tours?

Cosials: It's not only press. It comes from anywhere, literally anybody. It's not a concrete thing... It's comments we receive from every single body. Random industry people, or people in the internet, people in a festival, drunk people, people in a bar.

Does it feel like a catch-22, to write about it in your songs because then you have to talk about it in interviews?

Perrote: I personally feel there's like two kind of approaches to this question. Sometimes it's like: “Hm-mm and how was playing with The Strokes?” You know, literally, nod, not interested, just asking, because if you don't ask then it means you're sexist or something like that, which, obviously, that is absurd. I also feel there is not that many women in our position with this amount of people listening to us, in general, and one of the things that made me stronger and able to cope with all that sh*t, was having these three wonderful women next to me. Hopefully, if there's women that are [living through this] and they read about other women that are actually overcoming it and going through the same and realizing, OK, I'm not alone. It's not me, that has a problem [because] the whole f*cking society, or the whole industry, or just that f*cking drunk guy that is telling me that.

Cosials: Yeah, I think exposing that problem or talking about a problem is never going to be a bad thing. It's good. Sometimes it's not that easy to stand up and to fight for it again and sometimes it gets exhausting. But at the same time, not telling it would be hiding it, and it would be lying.

Where do you see the biggest growth for Hinds on this album compared to your previous records?

Grimbergen: I would say no doubt, the use of different instruments. That, for me, opened up so many worlds.

Was that something that Jenn introduced? Using new instruments?

Actually, we had Kali Uchis' album as a reference for a very long time. Things that maybe not make a lot of sense when we tell you. Then comes Jenn. We met her and we discovered that she's super fast in the studio. She goes like, "Oh, repeat that guitar again," and she goes with the synth and does something that fits with the guitar. She literally was completing that part of sound, because we didn't have synths at home. She was completing the part that we as Hinds didn't have but were trying to get.

She kind of filled in all the gaps.

Cosials: I wouldn't call it gaps, because I don't want to say that Hinds are incomplete without Jenn. It's strange, but I don't know in a boat, or something, maybe we're the captains, but she is the person who knows exactly how to make you direct that boat. Such a bad metaphor, sorry. [Laughs]

Perrote: We seriously put upside down everything that we used to do and everything that we learned and it wasn't only in the studio. It has been a whole year of focusing and figuring it out, but everything has changed. And I mean, not change in a bad way; growth, because we can also do that, but now we can do more things and now we can choose between what we used to do and what we know we can do and I think most of everything has opened up a window for us. We can do something super different to what we had done before. It doesn't mean we are always going to go in that direction, but I feel that we can go wherever we want now.