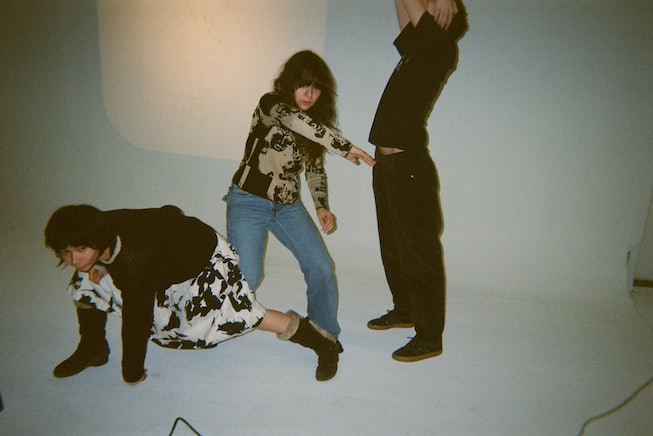 What does a young band bring on their first tour? For Chicago-based trio Horsegirl, their list of necessities includes favorite band tees, beloved stuffed animals, classic CDs, and a hungry appetite for food combinations strange but delicious.

The young rising rock group, comprised of Nora Cheng, Penelope Lowenstein, and Gigi Reece, aren’t amateurs to the stage but they are new to the specific and special marathon that is tour life. Back in March, the group wrapped up their brief, first-ever run of shows outside of Illinois, playing cities like Philadelphia, Washington D.C., and New York City, for their first time, alongside a four-day stint at Austin’s SXSW festival. All the while, they prepped the release of their debut album, Versions Of Modern Performance, their 12-track record of scuzzy and scruffy exultant rock that may shock in how fully-formed their sound is with regards to their age (the band formed in 2019 while all three members were in high school, and Lowenstein graduated high school the day their album released on June 10).

Below, the band gives NYLON a sneak peek into those days with their playful tour diary, which includes a special cameo from a stuffed cat named Stripey. On the road, they did everything you’d imagine a group of wide-eyed teenagers might get up to on a field trip of sorts: shenanigans in the SXSW hotel room, devouring of odd meals, and playful antics during a music video shoot in Bushwick. As they say themselves in one of the captions: “working hard or hardly working?” Why not both?

NEXT UP
Entertainment
Gracie Abrams & Gia Coppola On The Joy Of Free-Flowing Collaboration
Entertainment
Beyoncé Is Now The Most Awarded Artist In Grammy History
Entertainment
Harry Styles' "As It Was" Grammy Performance Featured A Silver Tinsel Onesie
Entertainment
Taylor Swift Sparkled In Midnight Blue On The 2023 Grammys Red Carpet
Style + Culture, delivered straight to your inbox.