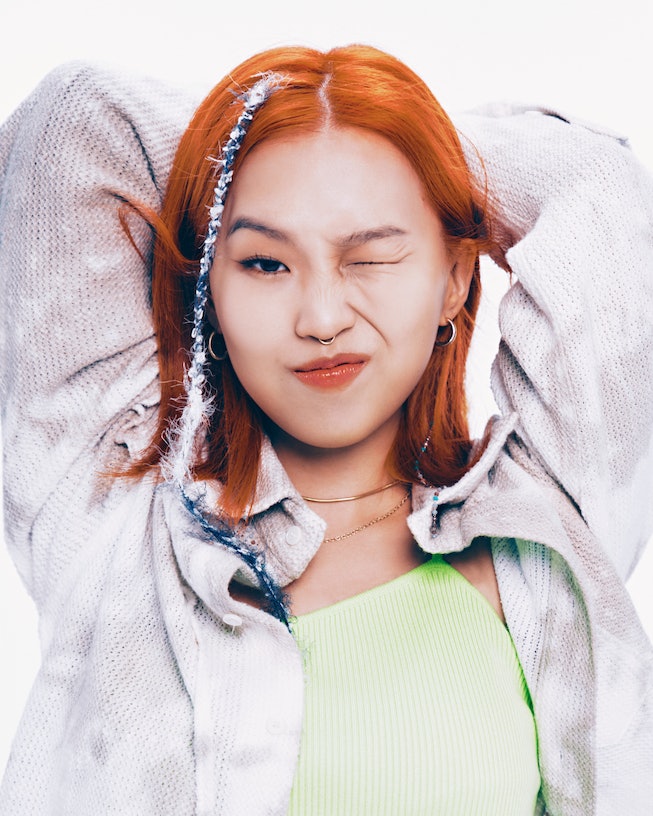 It was an early start of a Monday morning for me on the East Coast, but in Seoul, it was hitting close to midnight for Hunjiya. Through tired eyes and slight delirium, we both joked, the singer spoke about the upcoming “big day” that would mark her first release since 2020.

On Thursday, June 23, the Korean-American pop and R&B artist released “Talk2Me!” and “Favorite,” the first two singles from her upcoming album, Khamai. Leaning into her soulful vocals, the tracks are all about communication — struggling to, and striving to — and evoke a sense of understanding. For me, who also feels in between my part-Korean and American identity, her words almost feel like a reassuring shoulder.

Hunjiya was born in Seoul but raised in a small town outside of Ithaca, New York, where she fell in love with music and eventually began uploading songs on YouTube in high school. After signing with the South Korean-based indie label PAIX PER MIL, gaining attention for her soft but powerful vocals, she moved back to Korea to pursue her career in music.

“It was really hard adjusting. At first, I moved here alone during peak COVID and didn't really know what I was getting myself into,” says Hunjiya about the move, which also inspired “Talk2Me.” “[There were also] cultural and language barriers that shocked me because, in my head, I didn't realize that there are a lot of different things that I need to learn like respect and manners, how you use your body language or your facial expression. I'm still learning, but it took me a long time to really accept it. I would get really frustrated at myself for almost feeling not Korean enough. But now, I've come to a point where I realized that the difficulties are what make it worthwhile, and have also helped me grow as a friend and as a person.”

Hear “Talk2Me!” and “Favorite” on NYLON below, and read on as Hunjiya chats about her latest songs, moving to Seoul, learning to better communicate with her family, and more.

What was your music journey like and what were some of your earliest inspirations?

I've always grown up around music. I've done piano classes, and I was in marching band for the entirety of my school years, but I never really took it seriously or even started writing my own music until I was in high school. That was kind of the era of the early YouTube days where a lot of Asian American artists were uploading their stuff and becoming really popular.

And so I was the first Asian American representation I saw in music, and that really motivated me. I got a ukulele from Amazon and then I stole my brother's guitar because he never used it and I started learning songs off there. At first, I was super shy about it because I didn’t want anyone to know and I would only show my close friends. But eventually, some person that I was acquaintances with at school found out about my YouTube channel and I was traumatized. After that, the rest is history. I started to gain confidence to perform more and do more shows, as well as apply to music programs. I even went to music school for college just because I didn't really want to do anything else.

These are your first releases since signing to a label. How did that come to be and what songs do you think changed the trajectory of your career?

I think every album that I've released has pushed me an inch further but also far enough that I'm very grateful that it was able to do that. The single that I released from my album Look After August called “give it/what i get,” was actually the song that got me a Vogue feature, which was really cool for me. I would say also my previous song “hourglass,” which was actually the song that the head of the label randomly listened to through SoundCloud somehow. I never actually expected myself to move to Korea and experience such a career change in the midst of the pandemic. I was excited to have the opportunity and also to reconnect with my roots because I've never lived here before. I've only kind of experienced Korean culture with my parents to an extent.

It’s clear your Korean background has heavily influenced your music. How important is it for you to incorporate this perspective into your music? Do you plan to release full Korean songs one day?

Yes, but I want to make sure that my Korean is good enough for me to do it. That's been one of my goals. I will say it is important for me to have it within my music and career, but I also think it's almost inevitable for me just because I come from two different backgrounds. I really started to care more about my culture and preserving it in a personal way when I was 19 years old, and I really started to relearn the language when I visited Korea. It sounds morbid, but I don't know how long my grandparents are gonna live and I don't know anything about them. I almost feel guilty not being able to ask them questions about themselves except for surface-level stuff. Now that I live here in Seoul, there is a language barrier a lot of the time but I'm able to speak Korean much better now.

Going into your new tracks, "Talk2Me!" features a voice that I recognize but I couldn’t pinpoint who exactly it is.

His stage name is pH-1. I really was looking for a feature in general, but I wanted to make sure that they understood the experience of coming here as a Korean-American to have their own take on it. I also wanted to get another person's perspective on this take, as far as cultural barriers or feeling like you're familiar with a place but you're still new to it. But yeah, he's really great and he also got the song done super quickly. Originally, I wanted to put my own Korean verse on it but I felt a little insecure, so I thought it’d be good if I have another person be on it to explain their point of view.

“The song is about wanting to have deeper conversations with somebody, but not really knowing how to say it.”

Could you elaborate on what inspired “Talk2Me!” and what feelings you wanted to encapsulate in your new songs?

I’ve always wanted to write a song like this, but I just didn't know how. It wasn't until I kept running into challenges, language and culture barrier-wise, that I finally did it. I would think that I'm saying something correctly in Korean or English, and the other person wouldn't take it the way that I intended. The song is about wanting to have deeper conversations with somebody, but not really knowing how to say it.

That's a struggle that a lot of people have. Sometimes you get into friendships or relationships and you don't really know how to go further. Good communication is really dependent on both parties’ mutual understanding of that. I can’t say I'm the guru of communication because I'm still learning how to properly communicate my feelings in my own personal relationships too.

What were your favorite moments while recording your newest songs?

When I first made the songs, I made them all by myself in my grandparents’ room that they had for me. This is a sneak peek, but some of the memories that I had was recording the overall album and coming up with all those songs which were also written within the same week. When I first made them I literally didn't sleep for a week because I was so obsessed with making the album that I just kept producing and singing until 5 a.m. I also got some of the producers to help me with this album and we did a little four-person production day where we really threw our ideas altogether. They were really long days, but it was a lot of fun and I'm super grateful for their contributions.