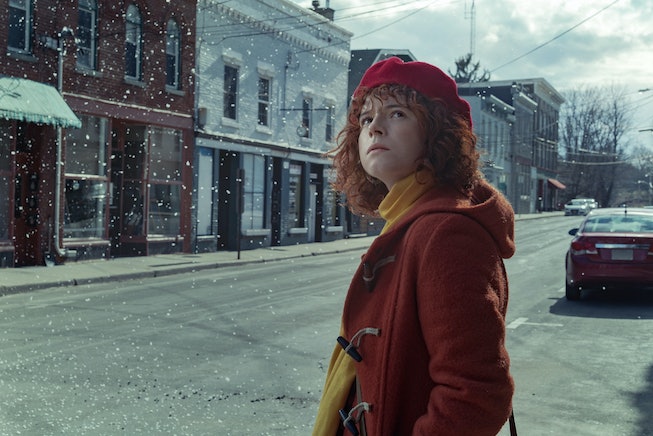 The proverbial call is coming from inside the house in Charlie Kaufman's latest horror feature, I'm Thinking of Ending Things. The Netflix film may start off with a semi-reluctant girlfriend (Jessie Buckley) visiting her boyfriend's parents (Jessie Plemons) on their remote farm, but it quickly devolves into disorienting nightmare fuel with plenty of Kaufman-core twists and turns. The film, based off a novel of the same name, is very cerebral, and might require more than one viewing to catch all its nuances. What else would you expect from the warped mind that brought you Eternal Sunshine of the Spotless Mind and Adaptation? If I'm Thinking Of Ending Things left you with more questions than answers, we're here to help with a handy breakdown of its biggest surprises.

Who is the janitor?

The film keeps this a little fuzzy, but the book makes it very clear: Jake is the janitor (Guy Boyd) and the janitor is Jake. After years of extreme loneliness, the janitor created an idealized version of his younger self with Jake, one that took the chances he didn't and had a more fulfilling life. Namely, would have happened if he had given his number to the cute woman at the bar trivia night all those years ago? The film adaptation hints to this as Jake recognizes the high schooler employees at the Dairy Queen, his intimate familiarity with the school's musicals, and his hidden stash of janitor uniforms in the basement.

What is going on with the girlfriend?

Jake's girlfriend is presented as the film's protagonist, and yet the viewer never is certain who she really is. And we mean this literally. Her name changes multiple times from Lucy to Lucia to Ames. She's a virologist one second, a quantum physicist the next, and also somehow a poet? It's confusing as hell, and eventually we get the sense that she's not real at all. Only the book confirms that she's a totally imaginary construction of a woman the janitor met once long ago.

What are the things that are ending?

I'm Thinking Of Ending Things is a bleak watch, and that only intensifies when we realize what "things" are actually ending. At first, it seems obvious that the girlfriend wants to end her brief relationship with Jake by constantly repeating the phrase to herself. Then, as things start glitching and feeling nightmarish, there's a few hints to something darker taking place. A friend keeps calling with cryptic messages: "There’s only one question to resolve. I’m scared. I feel a little crazy. I’m not lucid."

While the film doesn't address it directly, the book reveals that the calls are in reality the janitor's suicidal thoughts encroaching on his fantasy. He's the mastermind behind the whole warped day trip, if you will, one he constructed to decide whether or not he should end things.

What is the deal with the musical?

While the novel doesn't address any musical obsessions, Kaufman assumes that a janitor would see his fair share of musicals throughout his career. As the janitor's fantasy begins deteriorating, he starts pulling more from Oklahoma! There's a dream ballet from the musical in which Jake marries his girlfriend, only to be stabbed by the janitor, and the film's final scene is an older, distinguished Jake (thanks to some heavy stage makeup) singing “Lonely Room.” Of course, the song is about dreaming of a better, happier life.