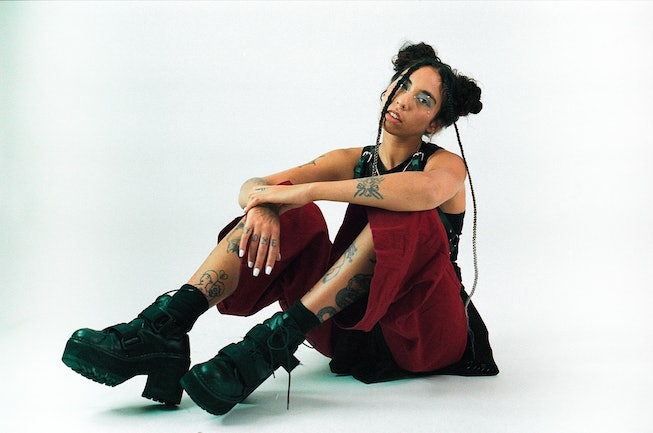 Indigo De Souza thinks about death and dying every day. Not in a morbid, depressing way, she explains. It’s more like its omnipresence is what allows her to live fully and freely in the moment. “I think in my hardest moments, somehow death almost makes things feel better because I'm able to have a perspective that is healthy when everything is terminal,” she says. “It's very heavy and sad, but also beautiful.”

De Souza’s frank and measured view of expiring is perhaps what allows her to sing so openly — and at times, brazenly — about dying on her stunning sophomore album, Any Shape You Take, out Friday. Across the record’s 10 tracks, there’s no shortage of shouted lines of her begging to “Kill me, slowly,” or asserting, “I’d rather die than see you cry.” It’s intense, but it heightens the moments when she does find something worth living for, like on the song “Hold U,” where goodness is something to grip on to tight before it’s inevitably gone again. “I will hold you, I will hold you,” she chants again and again.

With Any Shape You Take, the 24-year-old, Asheville-based musician is a blazing new star to watch in the indie rock space. Her songs are raw snippets of emotion that she distills into spiraling one-liners (“Was it something I said?” she repeats on “Darker Than Death”), and pairs with sharp guitar melodies that at times devolve into screams and chaos. It’s the sonic manifestation of the sort of turbulent emotions she channels on the album, one that has already caught the ears of critics and industry people alike; it arrives on the storied indie record label Saddle Creek, and comes with a co-sign from perhaps the most important person of all: her mom, who illustrated the project’s vibrant cover.

Zooming from a temporary home in Durham, North Carolina in the midst of band rehearsals, NYLON caught up with De Souza to chat about the making of Any Shape You Take and the journey getting here: her childhood growing up in a small town, her relationship to death, the joys of cake-sitting, and more.

I love that your mom illustrated this cover and the one for your previous album, I Love My Mom. Why did you choose to have your mom be a part of these projects?

Well, I chose to have my mom paint the album covers because she is just a very talented artist and not a lot of people even know that because she doesn't share her work really and she doesn't have art shows. But she has hundreds and hundreds of pieces of art that she's made of all different disciplines, so it just felt like a way to honor her artwork and show her art to the world in some kind of way.

Both of the album covers were just visions that came to me when I finished the albums. I had ideas of exactly what I wanted the cover to be, and then I just explained to her the scenarios I saw in my brain. Then she painted them the way she saw them in her brain, which is very different from how I saw them in my brain and I liked that about it.

Is she very involved in other aspects of your music?

No, no. She's just my mom. But recently someone asked me about her, which comes up a lot because of how the first album is called I Love My Mom, and it made me realize that I think I'm not actually focusing on her when I'm writing the music. It's just that she is more of a symbol of human mortality because she is the first body that made me truly come to and realize mortality as a concept. There was a scenario and I was at a festival with her and I was watching her dance. I realized that her skin was so thin and I started to understand that she was a skeleton underneath her skin and that she was dying and that I was dying, and it just made me wake up and realize the weight of death. I think that that moment is just very present in my life constantly and it is a symbolic thing that I write about a lot.

You grew up in the mountains, and I read that you moved to Asheville at 16, which is so young. What do you think was lacking in your hometown, or what were you looking for when you decided to move?

I was mostly looking for diversity and also just for a more creative community. People who were playing music and all different kinds of music, which in Spruce Pine, there was mostly bluegrass and country music and I kind of grew up on that, but I knew that I wanted to play other kinds of music. I also moved away because my grandfather lived with us and he had dementia and it was just a very confusing space for me to be in at that age, which I think it's really cool that my mom realized that and had the strength to figure something else out for me, even though I was so young. I'm sure that it was scary for her, but I lived with my sister who was in her 20s and I lived very close to Asheville High and she would drive me to school every day.

Was your hometown pretty conservative?

Yeah. It's very conservative and very limiting. My mom and I were very obviously the only people like us in the whole town. Mostly just visually, everything that she owns, her car, her house is covered in art. Yeah, she has naked Barbie dolls glued onto her truck and flames painted on the side and little action figures on the front.

“It never feels strange to embody something that I used to feel because I definitely feel all of those things still, songs that I wrote before, but just in a different way.”

In your songs you often talk about death and dying. How do you think of death in general?

I think the answer probably is I think of death every day, meaning that I think the presence of death is what allows me to be filled with so much light. Because once I became aware of death in a real way and understood the weight of it, I had a new appreciation for life and I think every day I just feel grateful to be here and grateful to love people and grateful to receive love. I think in my hardest moments, somehow death almost makes things feel better because it's like I'm able to have a perspective that is healthy when everything is terminal. It's very heavy and sad, but also beautiful. I feel like because I'm able to see things as fleeting, I'm able to appreciate them more.

Your lyrics can get intense, like on “Kill Me” for example. Does it ever feel weird singing those lyrics when you've mentally moved past the event of when you were writing the song?

No, it never feels weird. I think because every past version of myself is still honored in some way, every moment moving forward, I still feel connected to all those other versions. It feels natural. Sounds can get old though, of course, but it never feels strange to embody something that I used to feel because I definitely feel all of those things still, songs that I wrote before, but just in a different way.

The “Kill Me” music video has you cake-sitting, which I had never heard or knew what that was until I looked it up. Was it the director's idea to have you do that?

Yeah, the people who wrote the concept are very, very close friends of mine and they just know me really well, Jordan and Emily. I asked them to come up with something that was very absurd and existentially nihilistic. Something messy was also one of the things I asked for, because I love having messy things in videos. They came to me with that idea and I was just blown away by it immediately. I was so excited about it, and I didn't know what cake sitting was either until they came to me with it. But yeah, it was one of the most liberating things I've ever done in my life, was that performance in the ring with the cake. I had the best time doing that and I was blasting the Tirzah song, “Style.”

Did you do any research afterwards on cake sitting?

I watched a bunch of videos to get prepared for doing it myself and I practiced in an apartment the night before we did the video. We put down plastic and practiced and yeah... There's something about the way that a very beautifully decorated cake, something that people wouldn't normally destroy, something that we see all the time as a symbol of birthdays or celebrations and we always so delicately cut into cakes and dole them out to people...there was something really liberating and...It just felt right to smash down on that cake with my ass. It was the most right thing I've ever done. I remember thinking to myself, "I could do this, I could perform with this kind of thing and I would."