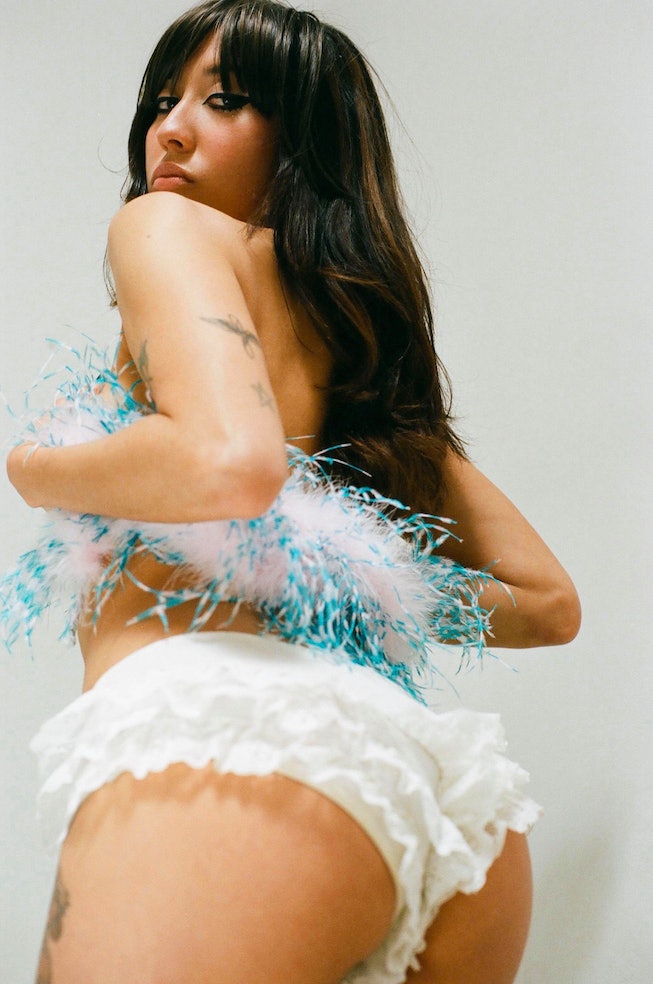 The first thing you should know about Isabella Lovestory is that she made a song about kitten heels. On the track, called, fittingly, “Kitten Heel,” the Montreal-based and Honduras-born singer aggressively waxes poetic about her minuscule mules in Spanish over a simple reggaeton beat: “I know you all want what I have/ You wanna have my Miu Mius/ You wanna have my kitten heels,” she purrs in its opening lines. In the song’s music video, she wears her heels into the shower, before blasting them dry with a hair dryer, her feet shot up in the air. It’s all kinds of manic and insane energy. The song is also a banger.

Lovestory is the pop star alter ego of former art student Isabella Rodriguez, and though the persona was initially dreamed up as part of a school project, it’s now become very real. She recently released her debut EP, Mariposa, a feverish introduction to the glamorous and fully-realized Lovestory universe, filled with tiny shoes, whiskey and cola, and a healthy abundance of surrealism and sass. On the very horny club track “Golosa,” she moans and chants about her butterfly tattoo and flying to Paris to have sex in a jacuzzi. If there’s one thing one can expect from a Lovestory anthem, it’s that every fantasy will be pushed to its limits.

“I'm very extreme with my taste,” Lovestory explains. “I like very, very sad music, and very crazy, and very pop.” Calling from a horse farm in upstate NYC, here, Lovestory details the fantastic universe she’s trying to construct, what it was like growing up in Honduras, and why kitten heels are the superior shoe.

What was the concept around Isabella Lovestory when you first began and has it changed?

Well, at first it was an experiment to create a pop star persona that was really sugary and about romance, but about combining the sugary aspects of love with the really dark side of it. For example, I would have really upbeat melodies with really dark lyrics and stuff like that. I guess "Lovestory" comes from that. It's just kind of a storytelling, romance.

There is some kind of fantasy behind it.

Yeah, definitely. And the more I create things, the more I get to know more about the character. And it's still fresh in my eyes, so it's definitely changed. I feel it became darker and sexier. It's kind of like, the first songs [I made, I was] a child. My first EP called Humo, I was kind of a teenager and then this one is more a young adult. It's growing in that way.

Do you feel like you identify with Isabella Lovestory?

What was your childhood like in Honduras? Were you surrounded by a lot of music when you were young?

My dad was a radio DJ for a bit and my parents had me really young. So their music tastes was really useful. They were really into punk music and new age music, but also living there, it's reggaeton all the time. I used to just listen to the radio and write down the lyrics as fast as possible to the songs, because I loved the songs.

And with all my family there it was just parties all the time. It was very lively and vibrant and it was very free, because I lived in the mountains and [we were] just running around. And I remember I had this little camera and I would film myself making home movies and stuff. So annoying, but it was just very free and beautiful and vibrant. It was definitely also a lot of violence and the government totally sucks there. It's super corrupt. So there's definitely a lot of passion, and raw... it was very raw and people just want to escape the fucking reality. So, the culture is very intense and it definitely gave me... I definitely lean towards music always because it was just everywhere there, at parties and everywhere you go, there was always music playing.

Most of your songs are all in Spanish. Was that ever up for debate when you were conceptualizing this alter ego?

It's just easier for me I guess, to write in Spanish and it's the most natural for me. And also the instrumentals is also the most natural to me. So it definitely always was in Spanish in my head. But I do love a lot of English pop. So I did incorporate English in my songs because I just want it to be accessible to everybody. Music is the most accessible art form, so I definitely want to try also... In Montreal I speak French so I made a little song called “Je T’aime”, which means "I love you" in French. Language is so crazy to me and it can be an instrument because each language sounds so different from the other and it's something really fun to play with.

I wanted to ask you about “Kitten Heel.” Why do you love those shoes so much and why is it such a powerful shoe for you that you felt like you needed to make a song about it?

Well, I think it's just the underdog of all heels. Because I feel it's very subtle and it's so chic and subtle and you don't have to be wearing crazy platforms to be the most powerful, sexy girl in the room. And also it makes you dance way easier. You can do crazy shit with them. But I got my kitten heels on eBay for $12 and they're Miu Miu. I think they're samples. I was totally in love and they're amazing. They're the protagonist of the video. I just related to it, because it's such an underdog and it's short and I'm really short, but they're still very loud and very particular. And when I wear them I just feel I'm subtle, but I'm still the baddest girl. I get obsessed with objects sometimes. I used to have tap shoes when I was little, I feel every girl had tap shoes, and the sound of it just makes me feel so powerful, that’s how the lyrics happened.

The video for "Kitten Heel" is also insane. Where do you draw inspiration from when it comes to translating your music visually?

I don't really have a specific inspiration other than myself and my personality and I want to show that through the editing of the videos and the fast pace and fun aspect to it, I guess. For “Kitten [Heel]”, I pulled an all-nighter. I wanted to give those shoes personality and I wanted to make them come alive in that video. So I had them take a shower, and take the Metro and do all sorts of things as if it was alive. And I guess just fantastical, magical stories inspire me. Things that you wouldn't expect and the fast-paced aspect of it. This came naturally because I'm really hyper, I have really bad ADHD. So I'm just okay chaos, chaos, chaos. But I just pulled an all-nighter to make that video honestly and I guess that chaotic manic side of me came out when I made it.

Where do you see Isabelle Lovestory, as a project, going in the future?

Oh, I have no limits. I want to become the biggest superstar of the world.