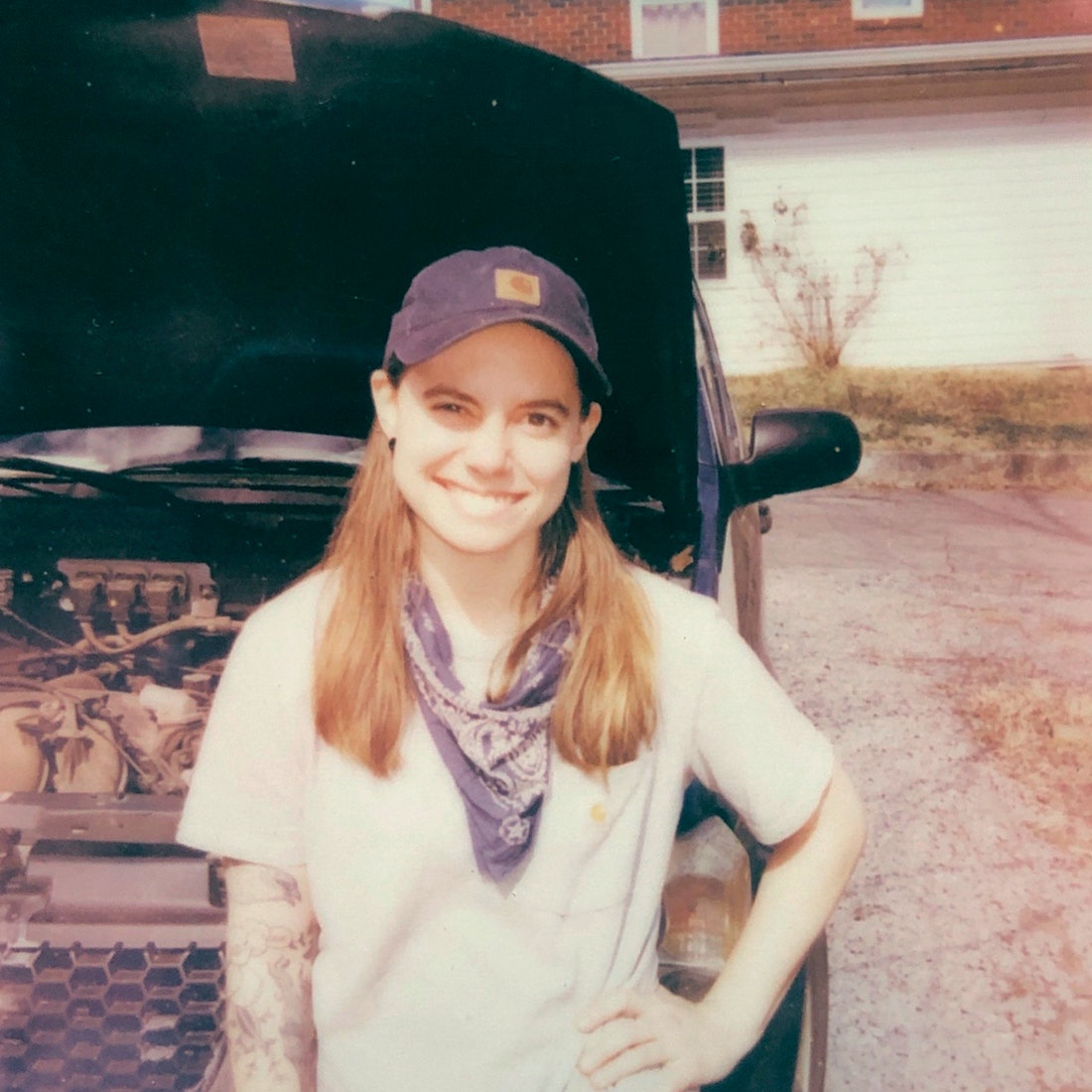 “Julien is one of those people whose opinion you want to hear about everything,” Phoebe Bridgers recently wrote about her friend and collaborator Julien Baker. “A true critical thinker with an ever-changing and ridiculously articulate worldview.”

She’s right. It takes 37 minutes into a Zoom call with Baker on a recent Monday in February to get to the topic at hand: her excellent new album, Little Oblivions, out now. Among the subjects discussed beforehand: the pros and cons of snow, the mechanics of a good smoothie, Tennessee real estate, diet culture, and bee pollen (she’s not a fan). At one point, the irony of meditation apps comes up — how do you really practice mindfulness when you’re relying on your phone? — spurring a 10-minute conversational detour. “I feel so bad for you that we accidentally got into this groove of conversation because I feel like my friends sometimes are like, ‘Don't talk about the internet with Julien. Don't start it.’” she says. But here’s the thing about Julien Baker: when she talks, you want to really listen. And when you talk, she really listens. Together, it makes her a wonderful conversation partner — and, as evidenced on Little Oblivions, one of our best modern songwriters.

Take, for example, the second verse on the album’s lead single, “Faith Healer.” “The smoke alarm's been going off for weeks / No one showed up/ And half the time it isn't what you think of.” That lyric, she explains, was actually inspired by a faulty smoke alarm in her last apartment. For most, the beeps would be a mild nuisance, something easily solved; for Baker, it prompted a spiral of self-reflection. “I just lived with this alarm going off for, like, eight months,” she says. “I just got immune to that frequency and my friends would be like, ‘Do you really live this way?’ Then everybody was like, ‘Julien needs help.’”

Little Oblivions marks the 25-year-old's third solo record, following 2015’s Sprained Ankle and 2017’s Turn Out the Lights. For the last five years, she’s been on the road, supporting those albums, as well as 2018’s boygenius project with Bridgers and Lucy Dacus. It wasn’t until the end of that tour that she found herself somewhere she hadn’t been in quite some time: stationary. She bought herself a “bougie” apartment in East Nashville, the one with the beeping smoke alarm, where she was living without roommates for the first time. She knew she’d have to return to tour in a few months, but for now, she was completely autonomous with her life. “I had never lived somewhere where I had signed a lease and been responsible for the Wi-Fi,” she recalls. “Until I moved into that apartment, I had paid rent in a balled-up wad of cash only. It was [also] the longest time I had ever just been home.”

It wasn’t what she expected. “It was like riding a bicycle slowly where I'm all wobbly and off-balance because I don't have the inertia of tour and work keeping me going,” she continues. “It ended up being bad for me, because I felt like I was cosplaying as an adult, performing my imagined understanding of adulthood. I was finally stable and I had all the true wrappings and ingredients of an adult life as I had imagined it, and then I didn't know what to do with any of that.”

This is a frequent topic of rumination for Baker: acting a certain part, and what that all means. It’s a common human deflect, sure, but one only amplified all that much more by spending your 20s in a public-facing role — particularly as someone who has come to be known for her soul-baring lyrics. “I put out a record when I was 19 years old and then continued making music and seeing other people's understanding of me in my values and in my behaviors reflected back at me as part of my job... Somebody brought this up to me the other day and I didn't even realize it, but they were like, ‘People don't really ask you about playing music, they just ask you about being a queer person and God,’” she says. It’s something she’s happy to talk about, she notes — “Obviously, those things are huge parts of my personality, and when Sprained Ankle came out, I was thrilled to be a queer person and speaking positively about God” — but having your values constantly boiled down to one succinct thesis makes you stop and pause. “All of a sudden I found myself waking up to being four years into being a musician as a trade, and thinking like, ‘Is this right?’”

It was in that “grown-up” apartment, living alone, that she came to a head with it all. “I realized that I just had been the same person for a really long time,” she says. “Then I evaluated my relationship to alcohol because I had been straight edge for so long that I think my idea of sobriety had shifted from something I needed to do for my health to an ideology or a principle. When that happened, with so many things, I was just reevaluating who I was as a person because I hadn't really had a lot of time to [do that].”

These issues are all at the forefront on the new record; “I wish that I drank/ Because of you and not only because of me/ Then I could blame something/ Painful enough not to make me look any more weak,” she opens on the heartbreakingly sparse “Song in E;” "'Cause I don't need a savior/ I need you to take me home,” she sings on “Relative Fiction.” Sonically, the album may be Baker’s biggest (it’s her first with drums present, all of which she played herself), but lyrically, it feels like a departure from her last venture Turn Out the Lights, more introspective and personal at every turn. Baker has thought a lot about why this is, again turning to the idea of masquerading as the performer she thought she had to be.

“Maybe it's exaggerated in hindsight, but I see a real dichotomy between the last record that I made and this record. Sprained Ankle I put up on Bandcamp, and then a label approached me about it. I didn't have any foreknowledge that people were going to hear it outside of my friend group at college,” she begins. When it came to her second album, she was aware that people were listening — and what they expected. “I feel like there is this obsession with the genuineness of art, and if artists can never really be free of the awareness of the observer," she continues. "The more that I think about it, the more I see this weird attempt to mitigate the guilt of having a tension, because I felt this imposter syndrome. All of a sudden people are asking me how I feel about God and queerness and sobriety, and I'm not even old enough to legally buy alcohol. But if I were to forfeit my seat at the table, or decline interviews, that would almost be yet another expression of privilege.

“So, I wrote this record that was traditionally beautiful. I put so much f*cking work and mental energy into trying to craft this narrative and have a whole bunch of ideological points to make with that record about healing and recovery and stuff. I can look at that record now and see that I'm withholding something from even myself.”

She was still writing about personal matters, but instead of confessing to a diary no one will ever see, she was writing something more akin to a public blog with a dedicated readership. Her concert halls were suddenly bigger and bigger, so shouldn’t she write bigger and bigger ballads to fit them? On Little Oblivions, she confronts what happens when you take that all away. “This record, I don't want to say it was made completely devoid of concern for the listener, but I was living alone in my apartment, I was financially stable, and then I blew up my whole life on purpose, and I didn't know why," she says. “And I started to see this thing that I'd hung so much of my identity on.”

As a result, Little Oblivions feels smaller than its predecessor, in the most satisfying way — its lyrics are hyper-specific and personal to Baker, but still find new ways to resonate with each listen. “I honestly love when people tell me what they get out of the record; it allows me to think about it in other ways,” Baker says. “Part of what makes art such a useful means of communication is its non-specificness. Maybe that's why I feel so anxious in interviews where I have to give a name and a purpose and a thesis to my songs. The reason why I am a songwriter and not a person who writes scholarly articles is because I have difficulty with certainties. I don't want it to be exclusionary.”

After her experiment in living alone, Baker, an introvert and an only child, realized how important connecting with people is to her mental health. A little over a year ago, she moved into a house where she lives with three other roommates, whom she met through a feminist film class when she recently returned to college to get her degree. Her room is upstairs, peppered with random instruments; luckily, the rest of her roommates are musicians, too, and late-night drum sessions are encouraged. “I'll spend all day up here working, but then I can walk downstairs and be like, ‘What's up, Kyle? Have you heard this crazy song? The baseline is so good,’” she says. “Then we just talk for like 10 seconds and I'm like, ‘All right. I know I'm not alone. I've made contact.’"